Gold: Shorts Are Feeling The Squeeze

The market was volatile on Thursday morning. The Fed announced it is changing the policy in relation to inflation, which they would like to see at 2%. It caused a lot of volatility in the market. It was at about $1945. It ran right up into the extreme above the weekly mean of $1963. It completed the daily target of $1981. We have seen a tremendous amount of profit taking at the Sell 1 level. This morning, since the VC PMI target was completed, we told our traders to take profits as gold reaches these levels. 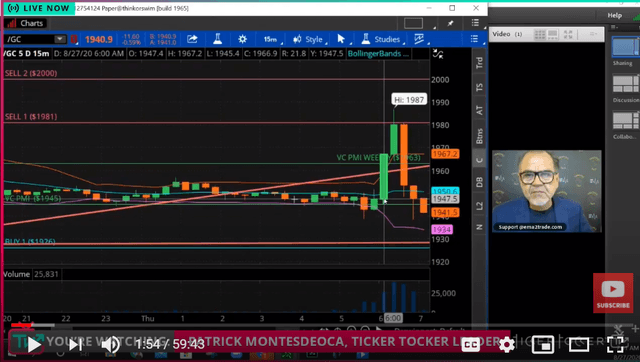 This volatility is a trader’s dream. We have been waiting for this market for many years. Until now, the manipulation of the gold market has prevented such volatility. Central banks and institutional investors used so many naked shorts to force the price of gold down. Now that we have worldwide demand for gold unlike any we have ever seen, gold is rising fast. The gold market is searching for its “real” price.

The effects of the pandemic are still rippling around the world. The economic system as weak before the pandemic, and the virus just pricked the bubble of debt. The debt-to-asset ratio was at more than 100% GDP in some cases. Currencies due to the pandemic have now accelerated their decline. Paper currencies are heading toward zero value with interest rates at zero.

If we look at gold compared to the stock market, in 1981 we had the Dow Jones at about 1000 and gold was at about $800, so a spread of about $200 between gold and stocks. That spread went from $200 to what should be $28,000 plus. Gold should equal the price of the stock market, but the suppression of the price of gold and inflation in stocks skewed that relationship. Given the price of stocks today, gold should be at about $7,000 an ounce spread ratio. The Fed and central banks are doing everything they can to keep the US dollar as the world’s reserve currency. By propping up the dollar, they inflate dollar-based assets, such as stocks, which continue to rise in paper value. They cannot allow gold to rise and the dollar to fall. The stimulus in response to the pandemic is highly inflationary, which will harm the dollar and make stocks and other dollar-based assets appear to rise in value, but will also mean that gold will rise.

The Fed announcement was not unexpected, given that the US is printing trillions of dollars to support the global economy. The Fed is trying to reassure markets and the world that assets will be supported. The Fed is now the buyer of last resort in many markets, which reduces anxiety in many markets. It has given a false sense of hope, however. Investors believe they can rely on the government. We will have to come to terms with the fact that the damage to the system has been far greater than was believed. That is why the Fed is acting like it is. The fear behind this action is the danger of a deflationary implosion. That is the Fed’s biggest challenge. It is a dilemma which the gold market is addressing.

Gold is a commodity and a currency. When the dollar was backed by gold until 1971, it was fairly stable. Then, it became a fiat currency, backed by oil, and has fluctuated ever since, declining in value by more than 90% since 1971. By printing more and more dollars, each dollar then becomes worth less and less. It has kept inflation away from the United States, by exporting inflation since 1971. By being able to print more US dollars, the US was able to export inflation to the rest of the world, while largely avoiding it at home. Other countries hold dollars, which decline in value with our currency.

The VC PMI average daily price is $1943 for gold. The Sell 1 level is $1981 and Sell 2 is $2000. The Buy 1 is $1926 and Buy 2 is $1890. We hold JNUG, NUGT and other derivatives when we want to hold positions in gold, instead of holding a futures contract with the attendant risk of a margin call. There is often a lot of volatility overnight, so we do not recommend holding futures overnight for most traders.

The market has a tremendous synergy when it reaches levels like this, such as this morning when we saw a lot of profit-taking. Gold is coming back down to activate a Buy 1 signal for the daily at $1926. The VC PMI identifies the extreme levels of supply and demand in the market. In this case, regardless of any economic news, you want to watch these levels. When the Fed Chair spoke about inflation, the market rallied from $1945 to $1987 in about 45 minutes, apparently discounting his words. This kind of volatility lends itself to profit-taking and shorting the market short term. When the market moves like this, you do not need to trade it. Wait for the highest-probability trades, when the market reaches the Buy 1 or 2 or Sell 1 or 2 levels.

You can use a stop to protect yourself. If the stop starts at your entry point, then your worst case is a breakeven trade. You can also use the Buy 2 level if you buy at the Buy 1 level. This is somewhat riskier, since you will lose a little but it allows the market to vary somewhat without being stopped out on your trade by any downward movement. The third option for a stop is based on a fixed dollar amount, which is an amount you are comfortable losing. Your choice of type and location of stop is based on your size, comfort level with risk, and if you use such stops, you will be in the market far more than if you use straight stops. Straight stops are often activated as traders take them out before moving the market in the other direction, so they can make money scalping the market. The volatility of the market is expanding rapidly, creating tremendous trading opportunities. The volatility will increase, and you want to be careful with your risk management and the use of stops.

At 7:30 am (Pacific Time), we got a Buy signal on a close above $1926. If you already have positions, this is a place to add positions. The daily target above is $1945. The closer you buy to the trigger, the lower your risk. You can begin to integrate the weekly signals, with the Buy 1 at $1901 and Buy 2 at $1890 for the daily. Since the daily and weekly levels are close together, it means that at these levels, we are likely to have demand enter the market and the price will revert back up.

Using these VC PMI levels removes emotion from your trading and provides a specific structure on which to base your trading. It will help your trading immensely. 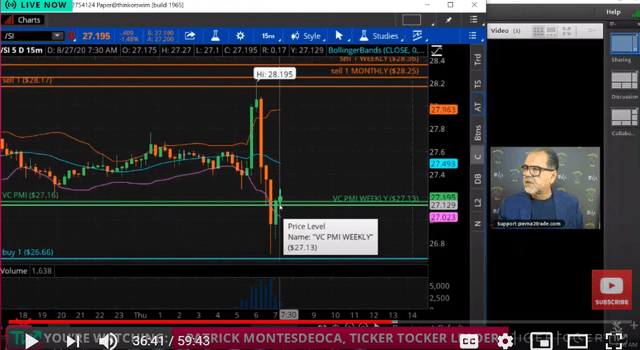 Silver is behaving similar to gold. It activated a short trigger at $27.46 and is already at $26.70, which is incredible volatility. Silver got up to the Sell 1 of $28.17 for today, which was a rally from the average price of $27.16. It then came down to this area that matches the daily and weekly levels, both of which are bullish. When the daily and weekly data align, it increases the probability that the market will revert to the mean from the Buy or Sell levels. In the futures, we are neutral in silver.

The gold-to-silver ratio got up to 120 ounces of silver for one ounce of gold in March. This spread is usually around 9 ounces of silver to 1 ounce of gold. But the ratio has already been adjusted from 120 down to the mid-70s in the past few weeks. This means that the market believes that the most undervalued asset to the gold market is silver. That spread relationship should be around 15-to-1. If gold reaches $3000, silver would be around the $300 level, although no one really knows. The price discovery has been skewed due to the manipulation of gold over the years by paper short-sellers.

For every 100 basis points decline in interest rates, gold should move 30%, based on historical movements. Interest rates are at zero and, in some cases, negative. If it was a 5-point move since we have seen interest rates fall from 4% or 5% on the 30-year bond, that puts gold at around $15,000. You can analyze these ratios and look at fundamentals, but it seems clear that gold and silver are destined to rise much higher.

To learn more about how the VC PMI works and receive weekly reports on the E-mini, gold and silver, check out our Marketplace service, Mean Reversion Trading.

Disclosure: I am/we are long GDX. I wrote this article myself, and it expresses my own opinions. I am not receiving compensation for it (other than from Seeking Alpha). I have no business relationship with any company whose stock is mentioned in this article.