From 2011 to 2012, gold underwent a two-year topping process at the $1,800/oz handle. Gold is now up over 18% YTD and recently breached this critical resistance level. Fundamental and macro analyses tell me that the gold bull market is still in the early innings, and this technical breakout serves as a confirmation signal of the current rally. 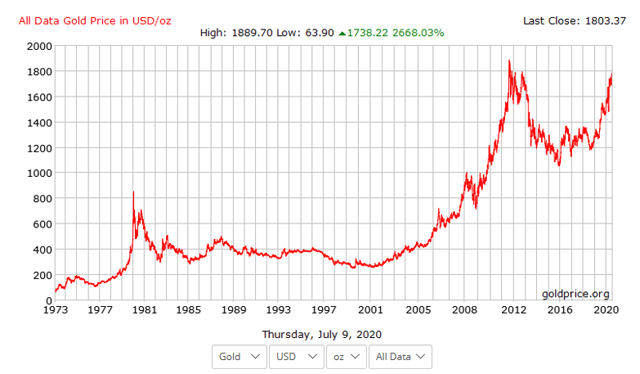 Aside from the technical breakout, inflows into gold ETFs in 2020 have surpassed cumulative flows from 2009, demonstrating strong demand. 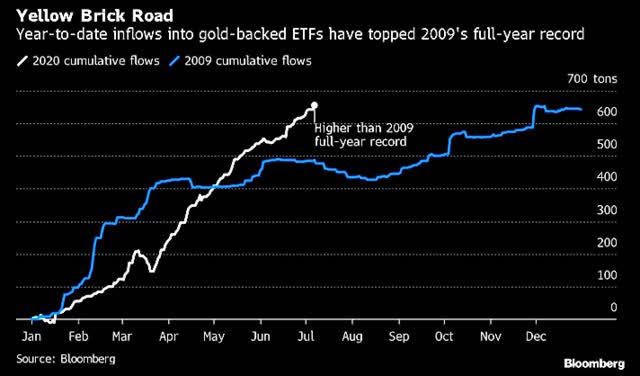 This article attempts to reveal to investors why, even after a healthy run when compared to the S&P, gold is still a strong buy.

Naturally, conducting fundamental analysis on a precious metal is difficult. However, one of the most useful ratios in determining the value of gold is the S&P to gold chart shown below. The S&P is still at the high end of its historical range when priced in gold, but recent market events have led to a near-term reversal of this indicator. 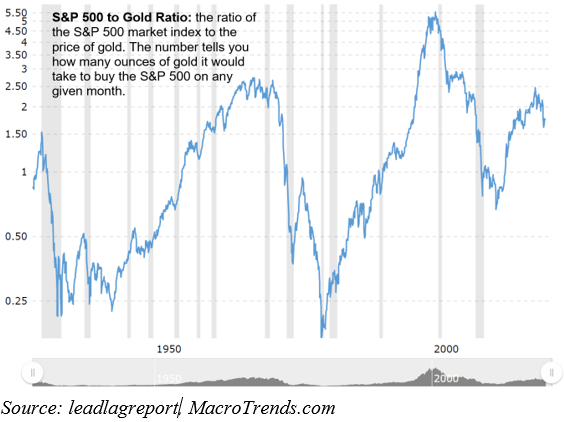 The last two times this ratio witnessed a prolonged downtrend was in the 1970s and the last gold bull market from 2000 to 2011. The reason for the former outperformance is obvious. The average inflation rate of the 1970s was 6.8%, double the historical average. Gold is a superior store of value that investors flock to in times of high inflation or uncertainty to protect wealth.

Gold’s outperformance from 2000 to 2011 meanwhile was caused by a decade of ultra-low to negative real interest rates. If U.S. Treasuries yield below the rate of inflation, it is a guaranteed loss on that investment in real terms. While gold offers zero yield, it retains purchasing power against an asset that guarantees a negative yield. The first chart below shows that in a negative real rate environment, investors historically bid up the price of gold. The second chart shows that gold also catches a bid as the percentage of negative-yielding bonds increases. 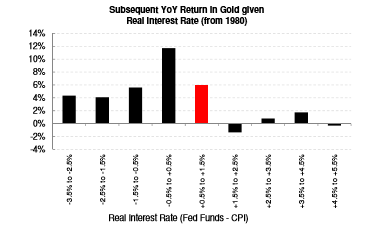 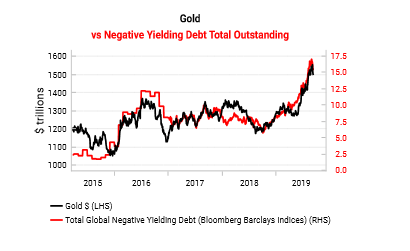 The reason why I tend to believe gold will sustain its breakout above the $1,800/oz level and that the S&P to gold ratio will continue to decline is due to the favorable macro backdrop. Low ownership of gold across institutional finance coupled with a “new normal” of ultra-low to negative real rates will be a tailwind until real rates rise due to economic strength or until they rise due to inflation. The first scenario is unlikely to occur for several years given the economic effects of the coronavirus, and the second scenario will benefit gold regardless.

The 60/40 portfolio model that underpins institutional finance will underperform as 40 percent of the portfolio offers a diminutive yield and these institutions continue to have a 6-8% performance requirement. Gold has a market cap of $9 trillion. The U.S. bond market cap is roughly $40 trillion. As even fractions of bond investors switch allocation to gold, the price will inevitably push higher.

The second macro tailwind is central bank demand. Global central banks have been consistently accumulating gold since 2010. In addition to retaining purchasing power as global central banks engage in competitive devaluation, decreasing dollar reserves and increasing gold reserves reduce a country’s exposure to tariffs from the U.S., an increasing threat after the U.S.-China trade war. In the first half of 2019, Poland, China, and Russia bought one-sixth of total gold demand. Despite being terrible for U.S. dollar hegemony, de-globalization will benefit gold prices.

READ ALSO  If "Facebook Is Private", Why Are They Feeding Users' Private Messages Directly To The FBI? 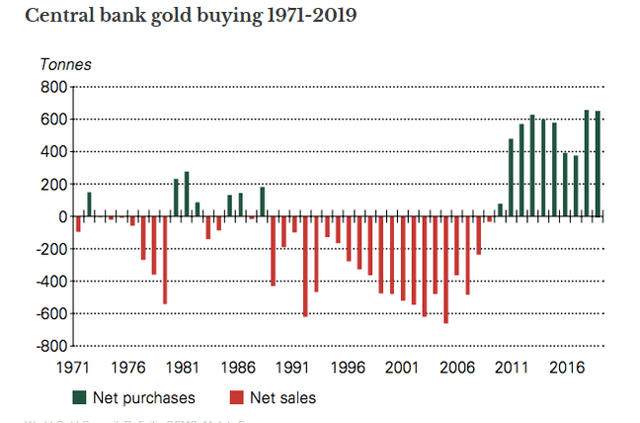 Lastly, excess liquidity will flow into gold as the gold prices also have a strong correlation to M2 money supply growth. This is the store of value play of gold against currency devaluation. Additionally, M2 expansion usually goes hand in hand with yield curve control as the foundations of loose monetary policy. As yield curve control and M2 growth continue into the near future, the price of gold will benefit.

M2 growth, ZIRP/NIRP, and de-globalization will all push the gold price higher. The S&P to gold ratio is still historically high, and the gold price just recently broke an important resistance level formed in 2011. All these factors together scream that gold is undervalued, and it is not too late to buy gold for those that missed this initial rally to $1,800.

In times of inflation, gold outperforms equities. When real rates remain subdued and M2 grows in a deflationary shock, gold outperforms equities again as it steals market cap from the sovereign bond market. We are currently in the latter scenario with the rate of M2 growth making a transition to the first scenario likely. Investors allocated in a typical 60/40 portfolio have 100% exposure to overvalued assets. Gold is an undervalued asset with global macro tailwinds pushing the price higher.