Gold Gets The News It Was Looking For

Precious metals investors have cause for being optimistic after this week’s Federal Reserve policy meeting. With bad news in abeyance in recent weeks, gold has lacked a headline-related catalyst and consequently was stuck in neutral. However, the Fed’s recently stated intention to continue its stimulus efforts indefinitely should give the metal’s price a much-needed boost as the U.S. dollar continues to weaken. As I’ll argue in this report, this is just the news the market was waiting for, and we should see gold – and eventually gold stock prices – responding favorably to it in the coming months.

On Wednesday, the Federal Reserve left interest rates unchanged as most observers expected. What really turned the market’s head, however, was Chairman Powell’s statement that the central bank would maintain its loose money policy until the U.S. economy shows complete immunity to the “recent events” that made the stimulus necessary in the first place. Acknowledging the “tremendous human and economic hardship” in the wake of government-mandated shutdowns, Chairman Powell said:

This is exactly the sort of news precious metal traders wanted to hear, in consequence of which the gold price shot up to just below its April peak price. Although gold remains within the boundaries of an 8-week trading range, there’s now a greater chance that gold will push out of its recent range – and well above the $1,750 level – by summer as low-yielding sovereign bonds become even more unattractive to safety-conscious investors thanks to Fed policy. 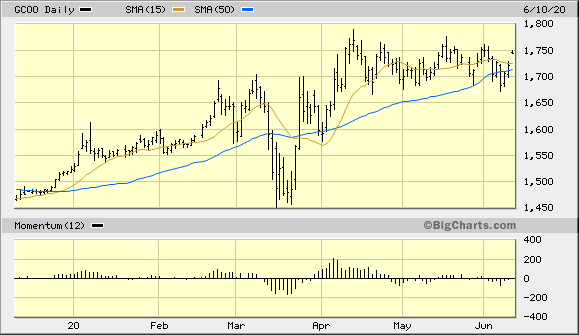 While some analysts believe that continued central bank stimulus will lessen gold’s attraction as a safety investment, it will almost certainly increase gold’s currency component. For, the Fed’s relentless drive to increase liquidity while the economy operates well below its full potential is clearly having a negative impact on the dollar’s value. This can be seen in the following graph of the U.S. Dollar Index (DXY), which has declined 7% (a big percentage drop for a major currency) since the lockdowns first began. 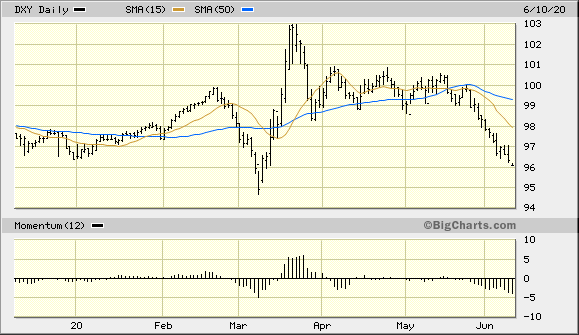 In fact, comparable losses of the dollar’s value in the recent past have always resulted in higher gold prices. The most recent example of this was the drop in the DXY from the 100 level to 95 in late February-to-early-March, which paved the way for gold’s strong showing earlier this spring. Then there was the 12% drop in the dollar in 2017, which set the stage for the powerful longer-term gold bull market which was launched that same year.

As gold is priced in U.S. dollars, a weak dollar ultimately translates into higher metal prices. This time should be no different, so with the greenback having already shown the results of an excessively loose Fed monetary policy, it should just be a matter of time before the yellow metal responds to its strengthening currency component.

Turning our attention to the gold mining stocks, I note with interest that the PHLX Gold/Silver Index (XAU) – which serves as a benchmark for the major U.S.-listed miners – has stayed above its widely-watched 50-day moving average throughout the duration of gold’s sideways trend since May. That’s a welcome sign of technical strength, although we need to see the XAU break out above its recent high at 130 to confirm that a new leg of its bull market is underway. For now, intermediate-term long positions in the actively traded mining shares can be held provided the XAU remains above the 50-day MA on a weekly closing basis. 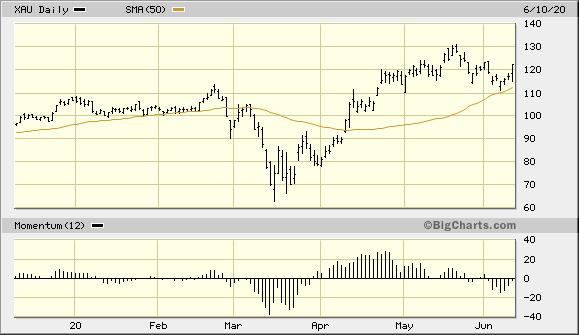 Meanwhile, my favorite indicator for confirming the internal condition of the overall gold mining stock market remains in “neutral” territory. The graph below shows the progression of the 4-week rate of change (momentum) of the new highs and lows among the 50 most actively traded gold mining stocks. It shows that while the market isn’t weak, it’s not exactly strong, either. Ideally, a surge higher in the XAU index will be accompanied by a move decisively higher in this indicator, which in turn would let us know that the incremental demand for gold mining equities has increased. 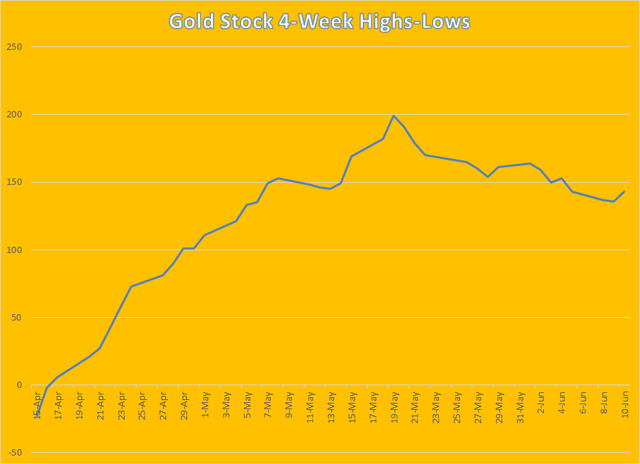 While there has been a show of strength in the above indicator in the last couple of trading sessions, additional improvement is needed to let us know that the gold stocks have completely returned to a condition of internal health. Nonetheless, once the expected currency-related strength is manifest in the form of a higher gold price, the major gold miners should follow the physical metal’s lead.

All told, the interim outlook for gold prices is looking better now that the dollar is showing sustained weakness. Gold’s currency component is now strengthening, which should increase gold’s attractiveness to investors looking to hedge against the threat of inflation from an excessively loose central bank policy. Gold mining shares, while currently stuck in neutral, should also eventually follow the gold price higher in the coming months. My conclusion is that a bullish intermediate-term (3-6 month) posture toward gold is still justified based on the evidence discussed here.