Global M&A recovers on vaccine hopes and US political stability

Positive news of a Covid-19 vaccine and the conclusion of the US election have emboldened global dealmakers to revisit proposed mergers and acquisitions and strike large-ticket transactions, according to bankers and legal advisers.

Companies across the globe announced nearly $40bn worth of deals on Monday alone in a clear sign that chief executives are looking to tap cheap debt or use cash stored away during the crisis to carry out strategic M&A.

Bill Demchak, chief executive of PNC, said “news of the vaccine, together with the certainty post-US election” set the stage for his bank, based in Pittsburgh, Pennsylvania, to buy the US operations of Spanish rival BBVA for $11.6bn, the second-largest deal in the sector since the financial crisis.

The cash purchase, which creates the fifth-biggest US bank by assets, was announced on the same day that Moderna revealed trial data that showed its Covid-19 vaccine was highly effective. The news came just a week after a similarly optimistic update from Pfizer and Germany’s BioNTech.

“​Even though we’ve had a recent spike in [Covid-19] cases, we have in effect put a floor on the downside case,” Mr Demchak told the Financial Times​. “And of course, both the Fed and ​the​ US government responded forcibly with fiscal and monetary stimulus.” ​

Home Depot, which has been among the winners in the pandemic as people working from home have looked to fix up their surroundings, reunited with former subsidiary HD Supply in a $9.1bn cash deal.

Canada’s Endeavour Gold agreed to a $1.86bn all-stock deal to merge with rival Teranga Gold. In Europe, Milan-listed Nexi said it was in exclusive talks to buy Danish rival Nets in a €7.2bn all-share transaction.

Anu Aiyengar, co-head of global M&A at JPMorgan Chase, told the Financial Times’s Dealmakers Summit last week that M&A was being boosted by the victory of Joe Biden in this year’s US presidential race.

While there is little correlation between M&A and US election years, she said, “there is a significant correlation to uncertainty . . . and that dramatic reduction of uncertainty that we currently have bodes very well”.

Dealmakers have also been assured by the prospect of a divided US government, with Democrats controlling the presidency and the House of Representatives and Republicans expected to retain hold of the Senate after runoff elections in Georgia in January. Some had feared that a Democratic sweep would have translated into a crackdown on deals or higher taxes.

“An expectation that not much is going to be different in terms of either regulatory approvals or the tax regime also helps in the reduction of uncertainty and increases confidence,” said Ms Aiyengar.

The last three months of a year are historically strong for M&A activity, as US and European dealmakers return from summer holidays seeking to get deals done by year’s end. In 2020, executives have also been trying to make up for lost time after the pandemic brought dealmaking to a halt. 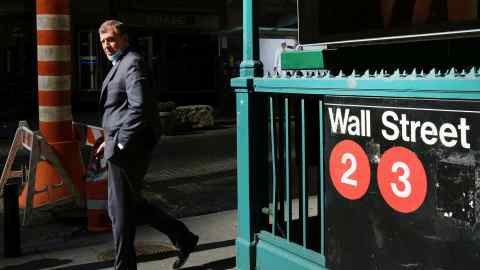 Jim O’Neil, head of Europe, Middle East and Africa corporate and investment banking at Bank of America, said financing markets are helping support a range of options for companies pursuing deals. “Corporates have the full suite of funding tools at their disposal for M&A, whether that be cash funded from debt and equity capital markets as well as . . . share-for-share transactions,” he said.

“While the global economy will improve, revenue growth will probably be low,” he said. “Without significant growth, synergistic M&A will be essential to increasing top and bottom lines.”