GLD: Next Buying Opportunity In About 6 Weeks’ Time (NYSEARCA:GLD)

We believe that investing in commodities and different asset classes for the long term can definitely be improved upon when one uses cycles. Followers of our work will know that we remain bullish on gold, silver, and the mining companies alike. Our strategy is to remain long our current positions and add on weakness.

The advantage with investing in SPDR Gold Shares (GLD) is that the ETF will track the price of gold, and it is the most liquid ETF in this space. Yes, the cost of owning shares (expense ratio) may be higher than some of its competitors, but the sheer volume of shares traded every day makes up for this, in our opinion.

Many gold bulls continue to favour the mining complex where the investor could invest in something like the VanEck Vectors Gold Miners ETF (GDX) to gain exposure in this area. The risk though with tying up too much capital in mining companies and associated ETFs is that these companies many times follow the equity markets more instead of tracking the price of the commodity. Therefore, if the stock market was to underperform the price of gold by a considerable amount over the next 18+ months, for example, would the miners be able to continue outperforming? We will know the answer to this in time, but we remain convinced that diversification across the asset class (including silver) is the best play here going forward.

The question then becomes how does the respective investor/trader know when to add to core long positions? This is where cycles come in. Gold traditionally cycles in an eight year, a year, a half-year and a monthly cycle. These cycles can stretch, but they must form, which invariably means we have yearly cycle lows and highs, etc.

The best long-term buying opportunity is undoubtedly the eight-year cycle low, which is then followed by the yearly cycle low. This does not mean, however, that one cannot make money by trading the yearly and half-year tops and bottoms, respectively, etc.

However, what the chart also implies is that GLD will be due a trip down into its 8-year cycle low in the next year or two. We state this because that multi-year low is due in 2023-2024. Even if this multi-year cycle tops late (like it did in the 2001-2009 cycle, which was extremely right-translated), the multi-year decline still took the best part of a year to play itself out. 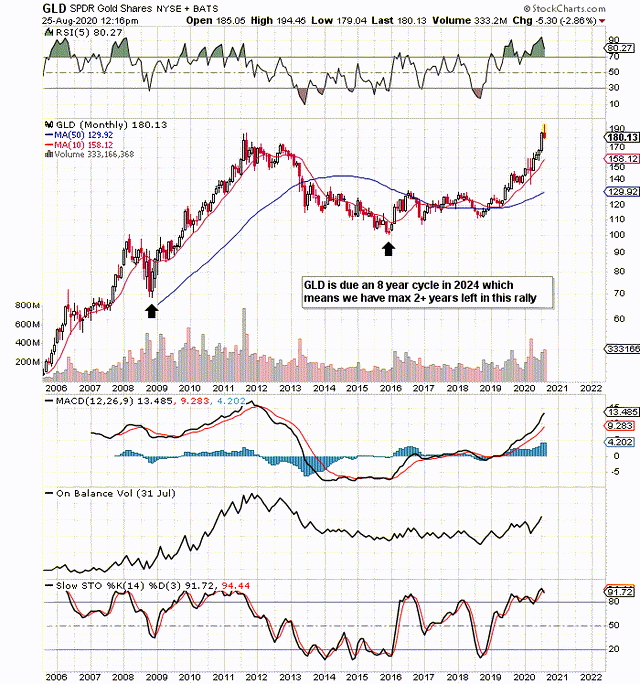 This brings us on to the yearly cycles. As we can see from the more near-term chart, we are now 5 months into the current yearly cycle. These cycles can stretch or they cannot quite run the 12 months, but the average is roughly 11 to 13 months. Considering the bullish rally of GLD over the past few months, we do not foresee a monthly swing high any time soon, which would bring in the pending intermediate decline. In fact, the next sustained move which goes underneath this support level will most definitely usher in the next yearly cycle decline. 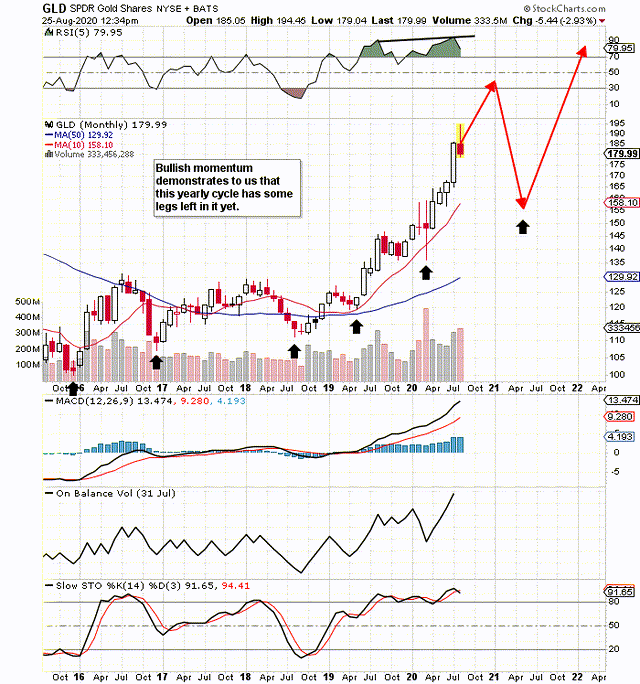 On the weekly chart, considering that price topped out on week 21 of this present intermediate cycle (and then printed a swing high), the odds are high now that GLD has started its intermediate decline. In order to confirm an intermediate low, we need the price to break below the 10-week moving average and at least retrace to the 38% retracement, if not the 50% level. Furthermore (as we had back in March), we need the RSI indicator as well as the stochastics to be much closer to oversold levels than we have now, for example. 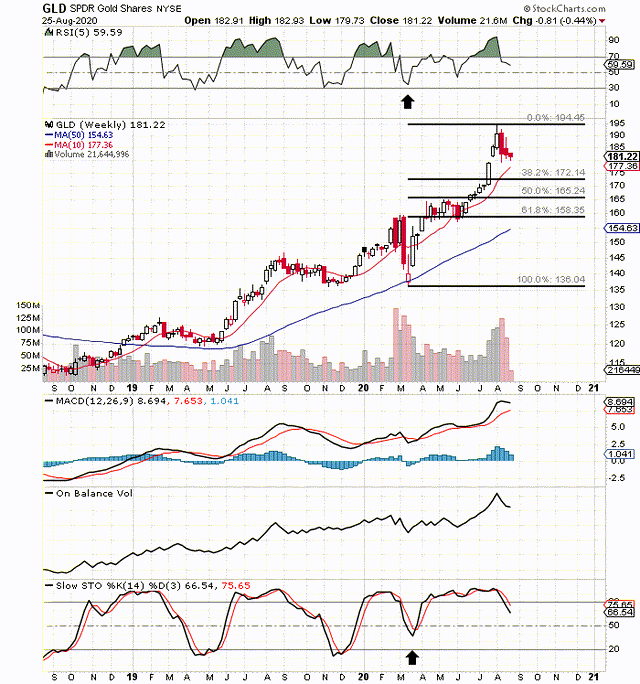 In our opinion, daily cycles have become really stretched probably because of the massive amount of easing the Fed has been doing since March. The last clear DCL was on the 5th of June. We thought the yellow metal printed another DCL on the 12th of August last, but we have yet to see any real follow-through since then. We are now on day 56 of this present daily cycle, but if the 12th of August lows hold, we may yet deem this date to be GLD’s most recent daily cycle low. Sooner or later, we will get a convincing bounce, but we would be surprised if the 6th of August highs get taken out in the coming upswing. 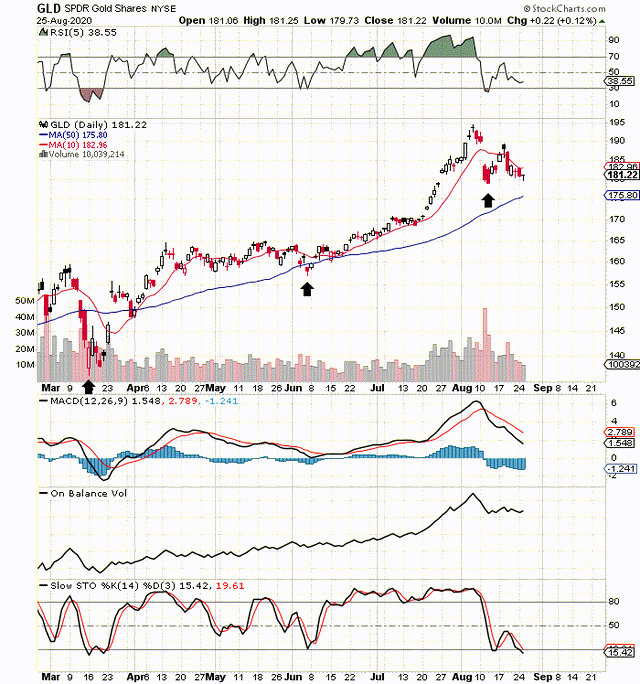 Therefore, to sum up, we believe GLD is:

We are not interested in trading the daily cycle as it will most likely left-translate (top-early) and then drop into the expected intermediate low. In a month to six weeks’ time, a new buying opportunity in GLD should present itself, in our opinion.

Previous PostOver Half Of San Francisco Storefronts Closed As Pandemic Downturn RagesNext PostWhat Is Gilead’s Role In The War On Hydroxychloroquine?