Doesn’t this look like a field of dreams if you’ve ever seen one?

I’m sure many of you have seen that movie. Released in 1989 and starring Kevin Costner, it was nominated for three Academy awards.

Even if you haven’t even heard of it though, you might recognize, “If you build it, he will come.” (Or the misquote of, “If you build it, they will come.”) You see, Iowa farmer Ray Kinsella (played by Costner) sees a vision of a baseball diamond in the cornfield with the great “Shoeless Jackson” playing again.

My love for real estate investing has given me a few “Shoeless Joe” experiences, one being in Hartsville, South Carolina – home of Sonoco.

Around 20 years ago, I visited the sleepy town to seek out a site for a Walmart, ultimately paying $1 million for a 100-acre farm formerly owned by Novartis (NVS). 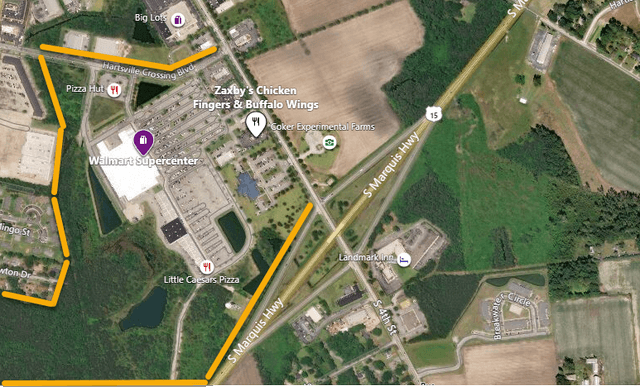 After completing the main store, I added 75,000 square feet of retail space and four outparcels for fast-food establishments. It took over two years to convert the once-vacant farmland into a thriving city center.

But the risk was worth it. It generated hundreds of new jobs for Hartsville and millions of dollars in taxes.

That’s what I call value creation!

For Ray Kinsella and me, “build it and he will come” is powerful. Though, in real estate, it’s not a once-in-a-lifetime opportunity. While hardly common, there are definitely other “field of dreams” to invest in. 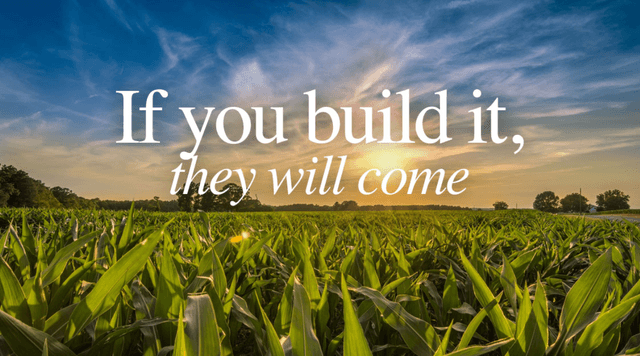 A Game of Supply and Demand

When it comes to real investing, the game is all about “supply and demand.” And in the farming sector specifically, decreased land supply and growing food demand is at the heart of the investment thesis.

As available farmland to feed the world’s growing population continues to decline, U.S. cropland has steadily appreciated in value. As illustrated below, arable land per capita has fallen from 1 acre to around 0.70. 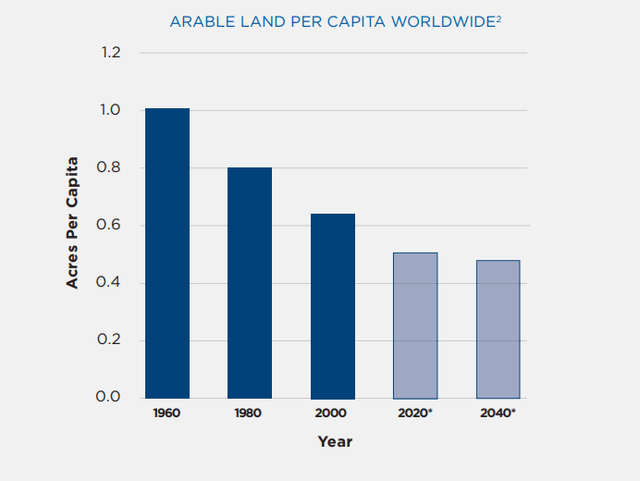 These farms are broken down as follows:

Much like the example I highlighted in Hartsville, large amounts of farmland have been – and continue to be – converted to suburban uses, from housing subdivisions to schools, offices, and parks to government and industrial buildings. Furthermore, climate change has negatively impacted many growing regions across the world, putting prime farmland in even higher demand.

Meanwhile, the world population is soaring to record levels, estimated to top 10 billion in 2050. 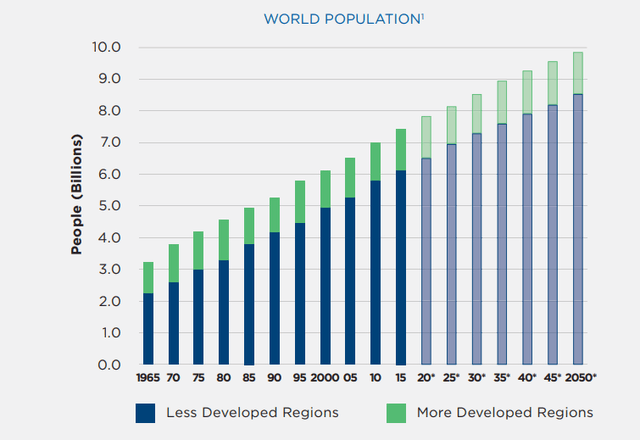 In short, the opportunity set is massive for farmland investors. 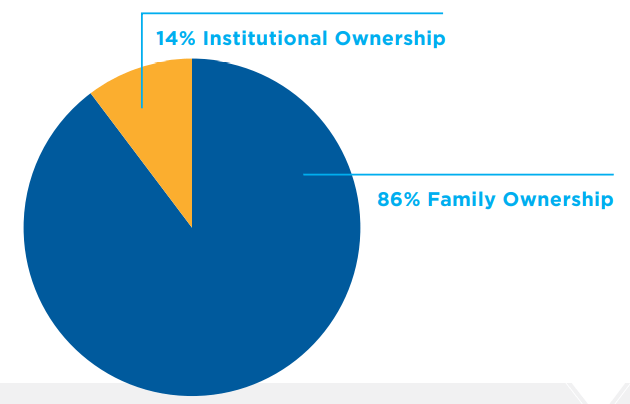 An Official Introduction to Gladstone Land

Gladstone Land’s business model is a simple one: It invests in farmland that grows a variety of crop types, with a primary focus on fresh produce since:

LAND owns 115 farms with 89,128 total acres in 13 states, valued at approximately $912 million. Those plots are 100% leased and have maintained exceptionally high occupancy over the years, as viewed below:

LAND is one of four public companies managed by an SEC-registered investment advisor with more than $3 billion of assets under management and over 65 professionals. While I generally don’t recommend externally managed equity REITs, I consider LAND’s management team well aligned with its 15% common stock ownership.

I also recently interviewed David Gladstone, LAND’s chairman and CEO since inception. An industry expert with 30+ years’ experience, he used to own Coastal Berry, one of the largest strawberry farm operations in California (1997-2004).

Here’s what he told me about external management:

“… we’re going to have to do that for a while because we need lawyers and accountants and all of that. And, at the same time… I can spread them across four different companies and it doesn’t cost… Gladstone Land that much to keep those talented people. And this is a very specific job. You can’t come into the farming business and just overnight start buying.

That makes perfect sense to me. So does LAND’s regional offices to source new deals.

This REIT’s leadership team – Gladstone and all – knows what it’s doing. 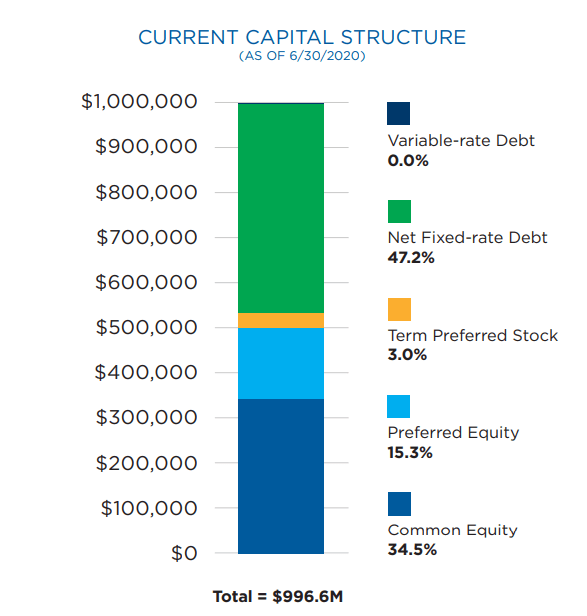 As you can see above, around 34.5% of its capital stack is equity, with two tranches of preferreds:

As David Gladstone told me last week, the company raised about $150 million over a two-year period that way. Then it was able to “get five different brokerage houses to start to make a market in it.”

The downside to that is “some of those guys” who sold the “non-traded stuff” cashed out.

“And so it traded down a little bit. It’s about $14.50. And so we were a little unhappy with that, but I think as time goes on and it matures a little more, it’ll come back… The company has another preferred that’s publicly traded, and it trades at about $26.10 per share.”

In terms of debt, LAND has around 47% with a number of lenders, including the ones below:

Gladstone combines long-term leases with long-term, fixed-rate borrowings to lock in the spread and protect dividends. As viewed below, its weighted average remaining lease term excluding options is 6.6 years.

By utilizing this simple business model, LAND has been able to steadily grow its portfolio. Since its IPO in 2013, it’s added $850 million in assets. 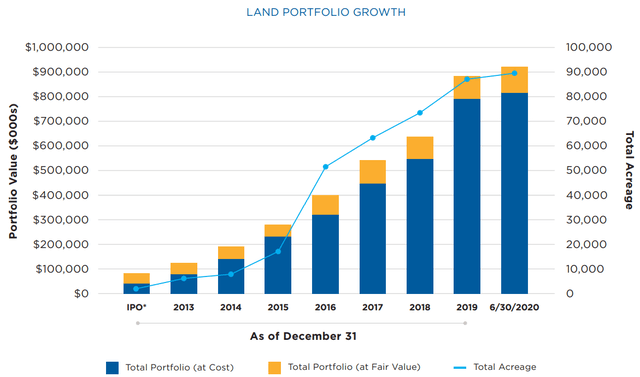 Here’s another snippet of my interview with David Gladstone:

“So I just keep doing that.”

He said LAND is fully diversified in its operations with about:

As such, he believes the dividend is “really safe.”

During Q3-20, LAND increased total assets by about $22 million. And mere days ago, it announced the purchase of 597 gross acres of farmland for about $3.8 million in my home state of South Carolina. On this, Gladstone told me:

“… sod is a good way to go sometimes, because it can be converted very quickly to vegetables. There’s no downside there. And sod is hot right now… that farm that you’re talking about really sells into Lowe’s (LOW) and the Home Depot (HD), or people who were fixing up their lawn.”

The sizable increase was primarily due to the $1.1 million of participation rents recorded. 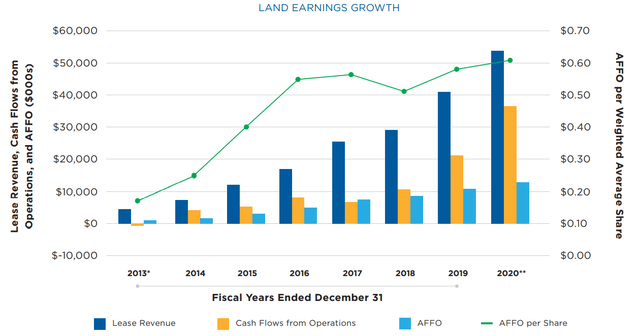 Quarter-over-quarter base cash rents increased by approximately $461,000, or 4%, mostly due to additional rent earned on recent acquisitions. And LAND has around $50 million of liquidity and ample availability under the borrowing facilities.

That’s resulted in an overall increase of 49.7% in monthly common distributions. 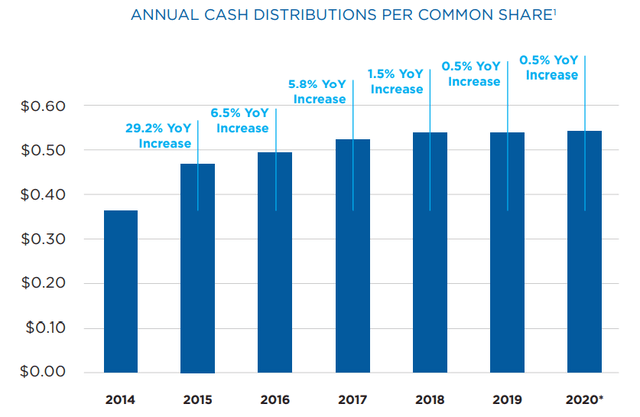 In Closing… If You Build It, He Will Come

Here’s one for my fellow baseball fans: Did you know that Shoeless Joe Jackson was from Brandon Mill just outside of Greenville, South Carolina? It was a mill town – hence the name – at the time, and his father was a sharecropper there.

Just a bit of trivia. Now let’s see if Mr. Market has caught onto ticker L-A-N-D. 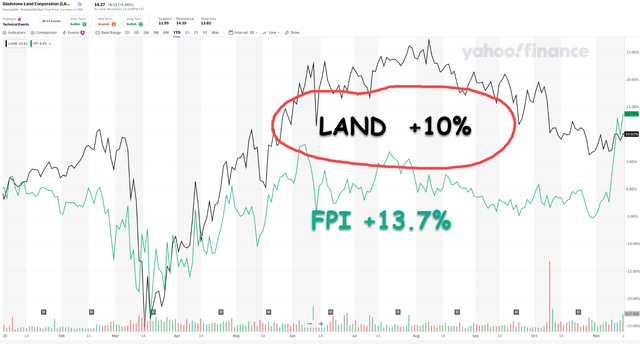 We recently upgraded Gladstone from a Hold to a Buy, with bullish expectations for 13% annual returns. 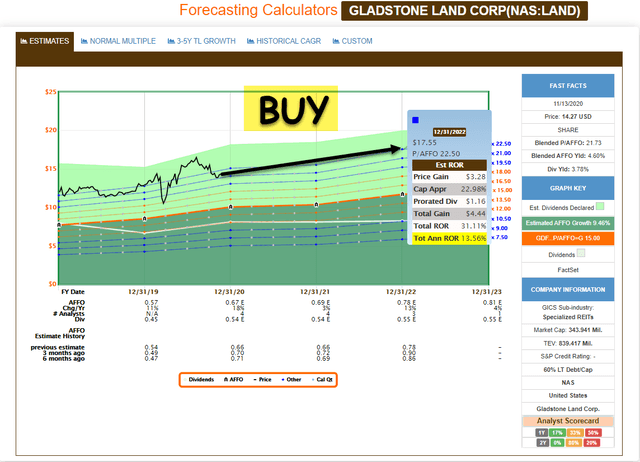 We’ve owned LAND for over four years in the Small-Cap REIT Portfolio, with shares returning an annual average of 17.46%.

For the record, I’m not the only analyst who considers LAND a field-of-dreams pick: 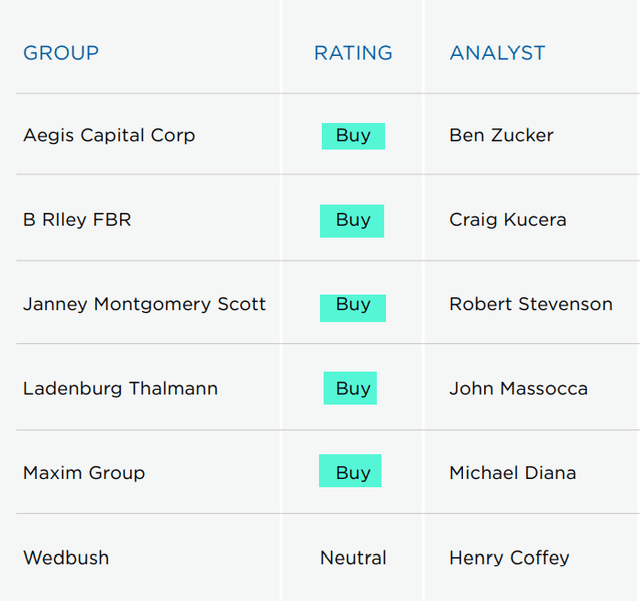 In closing, this monthly paying farming REIT checks all the boxes. We consider it a terrific buy-and-hold pick.

Speaking of which, we also bought Farmland Partners (FPI) on May 28 at $6.98 per share for the Small-Cap portfolio, and we have an article on that coming soon. 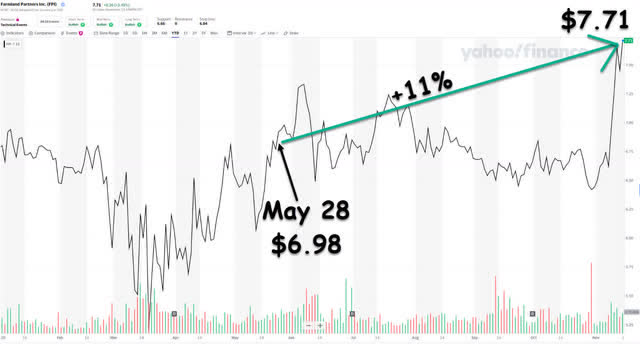 At iREIT, we’re committed to assisting investors navigate the REIT sector. As part of this commitment, we recently launched our newest quality scoring tool called iREIT IQ. This automated model can be used for comparing the “moats” for over 150 equity REITs and screening based upon all traditional valuation metrics.

Disclosure: I am/we are long LAND. I wrote this article myself, and it expresses my own opinions. I am not receiving compensation for it (other than from Seeking Alpha). I have no business relationship with any company whose stock is mentioned in this article.