The battle to replace Ruth Bader Ginsburg on the US Supreme Court was in full swing on Sunday, as Donald Trump’s pledge to nominate a new justice next week sparked anger from Democrats and opposition from two Republican senators.

The US president told supporters on Saturday night he intended to make a nomination within days, adding that it will be a woman.

But his plans were dealt a blow as a second Republican opposed the idea of making an appointment before the election, while Democrats threatened to do all they could to block him.

Lisa Murkowski, the Republican senator for Alaska, said on Sunday: “For weeks, I have stated that I would not support taking up a potential Supreme Court vacancy this close to the election. Sadly, what was then a hypothetical is now our reality, but my position has not changed.”

Ms Murkowski’s comments follow a similar statement by Susan Collins, the Republican senator for Maine, who on Saturday said she wanted whoever is elected in November to be allowed to make the nomination.

Neither senator said how they would vote if the matter was brought before the Senate this year, however, as has been promised by Republican leaders.

Joe Biden, Mr Trump’s opponent in November’s presidential election, appealed on Sunday for Republican senators to vote against any nomination made before the election.

“I appeal to those few Senate Republicans, the handful who will really decide what happens, please follow your conscience,” he said.

Mitch McConnell, the Senate majority leader, blocked then-president Barack Obama from appointing Merrick Garland to the Supreme Court in 2016 on the grounds that an election was nine months away. But he made clear this weekend he would not do the same to Mr Trump, despite an election being just seven weeks away.

With the Republicans holding a 53-47 majority, the Democrats would therefore need more defections to vote down Mr Trump’s choice.

But party leaders are also considering what other options they have, even refusing to rule out launching a second impeachment trial against the president as a way to take up Senate time.

Asked on Sunday whether Democrats could launch impeachment proceedings against either Mr Trump or his attorney-general Bill Barr, Nancy Pelosi, the Democratic speaker of the House of Representatives, said: “We have our options.”

“We have arrows in our quiver that I’m not about to discuss right now but the fact is we have a big challenge in our country.” 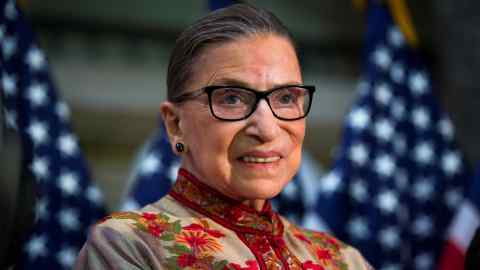 She later added: “Protecting our democracy requires us to use every arrow in our quiver.”

Other Democrats have suggested retaliating after the election if they win back the Senate, such as by ending the right to filibuster and increasing the number of justices on the court. Chuck Schumer, the Democratic leader in the Senate, said: “Let me be clear: if Leader McConnell and Senate Republicans move forward with this, then nothing is off the table for next year. Nothing is off the table.”

Mr Trump, meanwhile, was getting ready to name his choice within days, having circulated a list of 40 possible appointments earlier this month. That list contained a number of women, including Amy Coney Barrett, a conservative judge the president appointed to the US Court of Appeals for the Seventh Circuit in 2017.

His choice could have profound implications for this election and beyond. The Supreme Court is due to rule on the legality of Mr Obama’s flagship healthcare bill the week after the election. If a conservative is appointed, it also increases the chance that the court will undo the legal right to have an abortion as enshrined in Roe vs Wade.

Mr Biden on Sunday linked the choice explicitly to the issue of healthcare, warning that the insurance plans of people with existing conditions — those to whom Mr Obama’s law sought to extend coverage — were at stake.

“The complications arising from Covid-19 will be deniable pre-existing conditions for over 6m people who have already contracted the disease,” he said, adding: “Healthcare in this country hangs in the balance before the court.”

But the choice could have an even more immediate impact. As Mr Trump pointed out to his supporters on Saturday, the court could be called on later this year to decide the outcome of a contested election.

Previous PostUS Believes Iran Likely To Have Enough Fissile Material For Nuclear Bomb By Year’s EndNext PostItaly sees GDP down 9% this year, rising more than 5% in 2021