Americans are voting this year in the midst of a severe pandemic, an economic crisis, and historic civil unrest. Now, with just weeks to go until the election, a fierce Supreme Court battle looms.

The death of Ruth Bader Ginsburg, the iconic liberal justice, has injected fresh uncertainty into the election. It has forced both parties to grapple with a host of competing short-term and long-term interests that could significantly alter the US political landscape for years to come.

With Joe Biden leading Donald Trump in the polls, the question over whether Republicans will force through a Supreme Court nominee before the election adds a new layer of urgency into an already divisive campaign.

“Buckle in. This has made a crazy year in general, and a crazy political year, even more intense,” said Ilya Shapiro, a director at the conservative Cato Institute and author of a book about judicial politics, Supreme Disorder.

“We’re pretty much in uncharted territory given the polarisation in the country and the low level of trust,” he added.

For both Democrats and Republicans, the fight over Ginsburg’s successor provides an opportunity to energise their base. 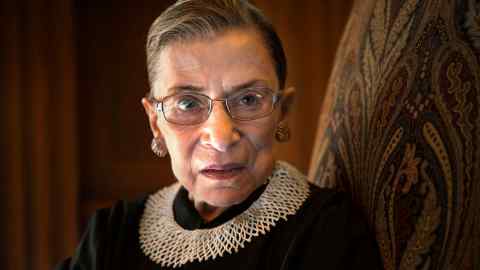 Mr Trump used the 2016 Supreme Court vacancy to unite conservatives behind him with the promise of remaking the courts in their image. In 2018, Mr Trump’s nomination of Brett Kavanaugh to the Supreme Court galvanised Democratic voters, particularly women, ahead of the 2018 midterms.

As the president lags in the polls, and Mr Biden’s supporters target wavering Republicans, Ginsburg’s death could allows Mr Trump to reprise that 2016 manoeuvre.

“Trump’s strength among reluctant conservatives — and we are talking about those that overlap with the audience that the ‘Republicans for Biden’ are gunning for — has been his single-minded focus on remaking the courts with McConnell,” said Dan Eberhart, a Trump donor, referring to the Senate majority leader Mitch McConnell.

“This focuses the mind of conservatives,” he added.

But Democrats too have learnt the lessons of 2016 and watched with alarm as Mr Trump has installed conservative judges at a record rate during his time in office. A Pew Research Center poll last month showed that more Democratic than Republican voters viewed Supreme Court appointments as an important issue.

Ginsburg’s death set off an outpouring of Democratic fundraising. In the immediate aftermath of the justice’s death, ActBlue — the Democrats’ fundraising platform — set a new hourly record for money raised by Democratic campaigns and causes. Between 9pm on Friday night and 9am on Saturday morning, the site took in over $31m.

Christopher Kang, chief counsel at Demand Justice, said the liberal advocacy group was planning to spend $10m to ensure the seat stays open until after the inauguration.

He viewed any confirmation battle as an opportunity for Democrats to highlight Republican positions on abortion, healthcare and gun control that could deter suburban swing voters who will be key in November.

“This is going to be a moment in which these unpopular positions that the Republicans hold are going to be . . . crystallised all in the form of this one nominee,” he said.

Charlie Cook, editor of the non-partisan Cook Political Report, estimated that the vacancy could help Democrats win over roughly 5 to 15 per cent of Independent or undecided voters — a group of which Mr Trump needs the support of roughly two-thirds to three-quarters if he hopes to remain in office.

It could also hurt some of the vulnerable Republican lawmakers who are trying to hold on to their seats, he said, particularly in the Senate where Republicans hold a thin 53-47 majority.

“This was already going to be an ugly election for down-ballot Republicans . . .[this] will make it worse.”

Mary Ann Marsh, a Democratic strategist, said the vacancy could also motivate Democratic voters to put more energy into figuring out how they were going to physically cast their ballots, no small feat in a pandemic when many voters are voting by mail for the first time.

The battle over Ginsburg’s successor may be just as consequential as the election itself. Replacing an influential liberal with a staunchly conservative justice would give the right a largely unassailable 6-3 majority on the Supreme Court, handing Republicans a powerful prize even if they lose control of the Senate and the White House.

In 2016, Mr McConnell blocked Barack Obama from appointing a replacement to the conservative icon Antonin Scalia, arguing that the next president should choose. Democrats are now deploying those same arguments, particularly against vulnerable Republican senators who could lose their seats this election.

Republican strategists said that despite these risks, the Senate majority leader would not miss a once-in-a-generation opportunity to reshape the Supreme Court for decades to come, despite any down-ballot implications.

“If judicial nominees are what you’re all about — and that’s been such a big part of Trump’s presidency — you move [if you’re Mr McConnell],” said Doug Heye, a Republican strategist.

As a purely mathematical matter, Democrats would need to persuade four Republican senators to vote against their party in order to halt any Trump appointee.

And whatever calculations exist before polling day, Mr Trump and Mr McConnell would have two months after polling day to push through a nominee before the new Senate is sworn in on January 3.

Democrats could benefit politically from their attempts to block Mr Trump’s nominee, but ultimately lose the battle after voters have gone to the polls. Still, some Republicans described the vacancy as a gift to Mr Trump at a time when he is trailing Mr Biden in national polls.

“For the first time in six months, [Trump] is allowed to be on offence. He can talk about his message in a way that appeals to his base . . . We may hit 200,000 deaths today or tomorrow but we’re not going to talk about that in the way we otherwise would, because we’re focused on this,” Mr Eberhart said.

He added: “We are not running solely on the Covid response and the economy any more. This resets the race. It’s a complete game changer.”