Ghosn deputy pleads not guilty on opening day of trial

Carlos Ghosn’s deputy has pleaded not guilty to financial misconduct charges at the opening of his trial in Tokyo, and defended the former Nissan chairman as “an extraordinary executive” despite his absence as both a defendant and witness.

“I was not involved in a criminal conspiracy,” Greg Kelly said on Tuesday, denying charges that he helped Mr Ghosn conceal the true scale of his pay through a deferred compensation scheme.

“This matter should have been resolved at Nissan,” added the former head of legal affairs who was wearing a mask, red-striped tie and a dark suit.

Mr Ghosn, who remains the subject of an international arrest warrant and extradition row, skipped bail and fled from Tokyo to Beirut in December, claiming he “would never get a fair trial” in Japan. He has denied the allegations against him. 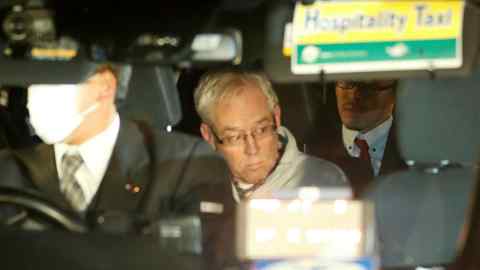 Mr Kelly has been forced to remain in Japan under a combination of custody and bail for nearly two years.

The American lawyer, along with Mr Ghosn and Nissan, has been charged with violating Japanese law by failing to include in financial documents ¥9.2bn ($87m) in deferred compensation that the former chairman was set to receive over an eight-year period.

A Nissan representative appearing at the same trial said the company would not contest the charges.

In an opening statement that lasted about 15 minutes, Mr Kelly, who turned 64 on Tuesday, also defended Mr Ghosn’s legacy in reviving Nissan from near bankruptcy in the late 1990s.

Despite widespread scepticism about Nissan’s prospects when Mr Ghosn joined the carmaker from its alliance partner Renault, Mr Kelly said he “proved the experts wrong”.

On the former chairman’s compensation, Mr Kelly said he and other Nissan executives conducted studies to seek a “lawful method” of compensating Mr Ghosn. “The evidence will show that I did not break the law.”