Germany’s Social Democrats have named finance minister Olaf Scholz as their candidate for chancellor in next year’s federal elections, a move widely expected yet controversial inside the party.

Among voters Mr Scholz is the SPD’s most popular politician. But he is much less well-liked by the left of his own party, which is struggling to navigate a new political course after heavy losses in recent elections. Last year, Saskia Esken and Norbert Walter-Borjans, themselves both further to the left, were elected as party co-leaders at the expense of Mr Scholz, a centrist.

On Monday, Ms Esken and Mr Walter-Borjans released a joint statement announcing Mr Scholz’s candidacy, saying, “Olaf has the chancellor ka-boom” — a reference to his June speech announcing Germany’s €130bn stimulus, a plan to help the country recover from the coronavirus crisis that also marked a decisive break with years of fiscal orthodoxy.

“We know that this decision is an unexpected turn for some,” the party leaders said. “We ask for trust in our path. We have decided to go this way together.” 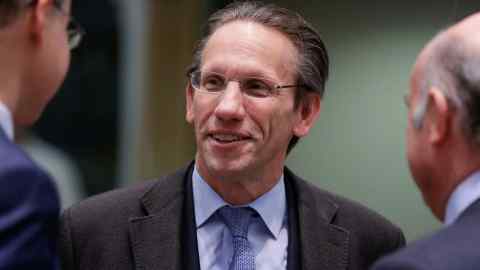 Supporters of Mr Scholz in the SPD argue that his political experience and handling of the economic fallout from the pandemic make him a strong candidate.

Launching his candidacy on Monday, Mr Scholz set out his campaign platform. This includes policies designed to bolster the welfare system, better wages for workers and a plan for combating climate change. He also credited the SPD with helping Germany to play a more unifying role in Europe during the coronavirus crisis than it had during the global financial crisis more than a decade earlier.

During the same press conference, Ms Esken and Mr Walter-Borjans hailed his economic stewardship throughout the pandemic, saying it showed that “we could achieve results in a government”.

During the pandemic, Mr Scholz backed away from German governments’ traditional obsession with the Schwarze Null, the “black zero” balanced budget policy, which had been criticised by many in his own party as well as international organisations such as the IMF.

He may face other problems, however, as investigations continue into regulatory failures in connection with Wirecard, the German payments company that collapsed in June after admitting that €1.9bn of its cash probably did “not exist”. Germany’s financial regulator, BaFin, answers to the finance ministry that Mr Scholz heads.

His candidacy also comes days after Mr Walter-Borjans said the party was open to forming a coalition with the leftwing Die Linke party — a move that would be unpopular with centrist voters. Among Die Linke’s more controversial foreign policy stances is a call to dismantle Nato.

Peter Matuschek, chief political analyst at the polling agency Forsa, said the choice of Mr Scholz was a “desperate endeavour” by the SPD to regain popularity.

“This will for sure be a problem in the coming campaign, because voters know that Scholz is a kind of solitaire, and not much related to his party,” he said. “It will be difficult to sell him to the electorate as an SPD candidate.”

Although Mr Scholz is polling well as finance minister, recent Forsa surveys show public trust in the SPD, historically one of Germany’s major parties, has been hovering between 6 and 8 per cent for several months. Approval ratings for Angela Merkel’s ruling Christian Democrats, by comparison, have hit 46 per cent since the pandemic.

Some Die Linke politicians remain wary of Mr Scholz’s selection and a potential alliance with the SPD with him at the helm.

“We will measure him against his willingness to break reliably with the CDU. However, I doubt he will be able to lift the SPD out of crisis mode,” said Fabio De Masi, an MP for Die Linke on the Bundestag finance committee, which recently questioned Mr Scholz over the Wirecard scandal in a closed-door session.

Mr de Massi also said his party “will not tone down our criticism in the Wirecard scandal”.