George Floyd Died for Trying to Compete With the Federal Reserve 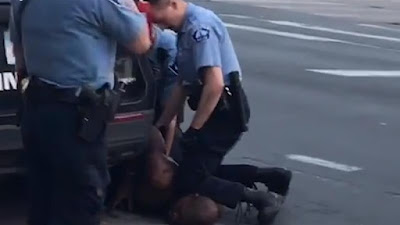 In a very significant way, George Floyd died because he did what the Federal Reserve does on a daily basis on a much grander scale.

On May 25, Minneapolis police officers arrested Floyd after a deli employee called 911, accusing him of buying cigarettes with a counterfeit $20 bill.

Seventeen minutes after the first squad car arrived at the scene, The New York Times reports,  Floyd was unconscious and pinned beneath three police officers, showing no signs of life.

In other words, he died as the direct result of using a $20 bill that was printed out of thin air, that is, by slapping green ink to paper.

By slapping green ink to paper, and electronically, such money printing occurs on a daily basis by the government-controlled Federal Reserve.

The Federal Reserve, through decades of sleight of hand, cut the relationship between gold (a money that emerged naturally in the world through free exchange) and Federal Reserve notes. The Fed notes are now the medium of exchange in the United States. It is against the law to compete with the Fed in printing money out of thin air.

The government protects the Federal Reserve monopoly in this area. By doing so, the government directs the Fed to print money in ways that benefit government leaders, and those close to government. It really does not give someone like Floyd a chance when others are walking around bidding up goods with newly printed money. You have to be very close to power to get a good piece of the money printed by the Fed.

And so, copying the Federal Reserve, Floyd allegedly used a $20 bill printed out of thin air by a non-Fed entity. This at its core was why George Floyd ended up murdered. He was using a bill in competition with the Fed. There would never have been a call to the police otherwise.

It should be noted during the same general period of the COVID-19 panic when Floyd passed the lowly $20 bill, the Federal Reserve has printed more than three trillion dollars.

Suffice to say, no copper will be pushing his knee on the neck of Federal Reserve chairman Jay Powell and choking him to death anytime soon.

Governments take care of their own and make sure no one else attempts to get in on the lucre. This is why George Floyd is dead.