Genuine Parts Company: Current Crisis Is A Tailwind Based On Precedent (NYSE:GPC)

Among the aftermarket players which we think are especially interesting in an environment where income might be tight and automobiles themselves are not turning over, Genuine Parts Company (GPC) comes across as the best income pick with one of the least speculative theses. With delayed durable purchases, vehicles become old and prone to failure, and GPC seems healthy enough to be able to capitalise well over the medium term with its network of autoparts stores in Europe, North America and Australia. Where much of automotive might see a slow recovery, GPC is an exposure that has a tailwind in a depressed macro environment as ours once the risks of lockdowns are more certainly behind us. With a 3.67% dividend yield, higher than what many of its peers can maintain, GPC strikes us as favoured income pick in this environment, worthy of addition to portfolios.

The investment thesis revolves around one key thematic, which is that during low-income periods, people postpone their durable goods spending due to limited cash for large outlays. Cars are one of the highest-ticket items in this category, so people opt for sticking with their current vehicles instead of buying new ones. But as cars become older and more prone to failure, maintenance frequency and costs begin to rise. For a company like GPC, this is a core value driver. Given that the majority of its market is in the US, we can leverage US statistics to substantiate why GPC might be well-positioned in the post-COVID-19 world.

Although the May unemployment numbers may have initially looked positive, the reality is that there is still an alarming portion of Americans that are still struggling with employment, enough where the American economy will certainly be impacted. Indeed, this time the drop in employment has been more dramatic than even in the 2008 crisis, which indicates that some of the notable changes observed during that economic downturn are highly likely to manifest now.

Looking at data for vehicle age from IHS Markit, between 2002-2007 light vehicle age in the US increased by 3.5%. Then followed the 2008-2013 period, where the age increase was 12.2%, coinciding with the financial crisis and the period immediately after. Finally, there’s the 2014-2020 period, where the age growth rate has settled at a more normalised rate of 4%. We can expect some uptick in this figure for at least a year coinciding with the current macro headwinds, but it is uncertain how permanent the nature of the current unemployment rise and economic hardship is, although it is likely to be longer than shorter given the real economic impact.

The EU is GPC’s second-largest aftermarket geography. Based on data from the European Automobile Manufacturers’ Association (ACEA), the EU motor vehicle fleet is already relatively old. Passenger cars are now on average 11.1 years old, vans 11 years and heavy commercial vehicles 12 years. These figures, which indicate an older average age than in the US, mean strong underlying fundamentals for GPC which are likely again to get a boost with COVID-19. Indeed, European figures had also followed similar cycles to the US, with substantial growth in passenger cars occurring between the 2005-2010 period likely driven by a post-crisis environment. 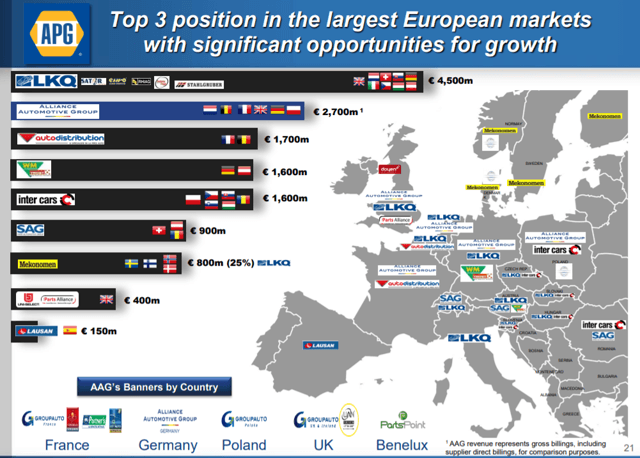 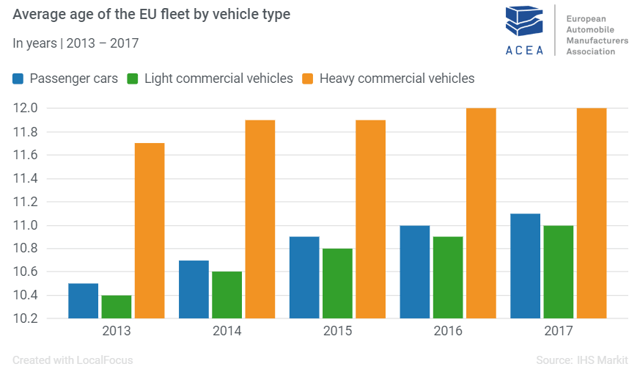 Finally, there’s the Australian market, where GPC sales account for 7%. According to the Australian Bureau of Statistics, the average age of all vehicles registered in Australia was 10.1 years, unchanged since 2015. Again, an older baseline age, and also presenting a similar precedent during the 2008-2013 period with a marked increase in car age.

From 2008 to 2013, GPC reported a revenue CAGR of 27%, and the company achieved even higher rates of growth in profitability.

In that period, the stock price moved from a bottom of $28 per share to $87 per share at the end of 2013, making for an impressive 210% capital appreciation. Indeed, similar levels of return could have been achieved investing at the March lows. In the long term though, even the valuation at pre-COVID-19 levels might be attractive, as a medium-term boost from more frequent maintenance visits could bolster the company’s finances, not only covering its dividend but also giving it the resources to continue in an inorganic, private equity-like expansion. In the last crises, the price went from sold-off levels to pass stalled levels and reach new highs.

Regarding the dividend, in fiscal 2019, operating cash flow was $892 million and capital expenditures were $298 million, giving free cash flow of $594 million. The dividend required a $439 million outflow, resulting in a dividend-to-FCF ratio of roughly 74%. Naturally, the situation this year is likely to look a little different. Periods of lockdown will have inevitably cut some cash generation opportunities from the outlook. However, there is substantial margin in the coverage, and for a business that is likely to see a major rebound, and which probably benefited from low operating leverage during the lockdowns due to its distribution business model, the dividend seems relatively safe to us, especially since it’s already been confirmed for the 2020 annum. This adds another year to the company’s storied dividend track record, where GPC has paid a cash dividend to shareholders every year since going public in 1948. 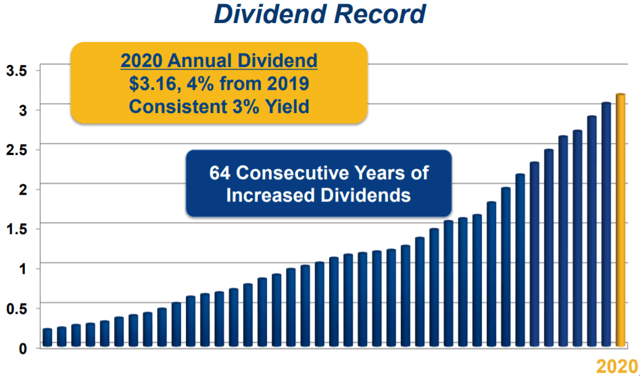 Cars are generally becoming more sophisticated and less prone to breakdowns, constituting a secular trend to the detriment of the business. Nonetheless, the increases in car age that we saw after past crises are doubtlessly not the result of sudden, punctuated innovation.

There are other concerns though. A second-wave lockdown response would damage the company’s finances. The main impact would be that the end-markets wouldn’t be depreciating their cars through use. Despite being able to weather weak periods due to low operating leverage, this is a concern and would continue to harass the fundamental value drivers of GPC’s business.

Despite these concerns, the thesis for GPC is less speculative than for most other auto players, which indeed has earned it a quick recovery. With lower income, people will defer purchases, and with lower gas prices, use of the car will not be prohibitively expensive even for hard-hit households. People sticking with their old cars will mean business for GPC, and even in the event of negative developments, leverage is not excessive at 2.1 ND/EBITDA, with the dividend being ample and well-covered by cash flows. With better financial prospects than many other businesses, even outside automotive, GPC looks like a favourable pick in a recessionary environment.

Disclosure: I am/we are long GPC. I wrote this article myself, and it expresses my own opinions. I am not receiving compensation for it (other than from Seeking Alpha). I have no business relationship with any company whose stock is mentioned in this article.