General Mills (NYSE:GIS) is of course still a global food colossus. While it seems the COVID-19 pandemic is effectively destroying the global economy, one assertion remains true: people need to eat. General Mills as a company has been y aking steps to flatten the curve and limit exposure to the virus, while continuing to safely operate its business. That said, there have been increases in key business lines, and decreases in key business lines. We believe shares are a buy as a defensive play as the stock has held up well during all of this turmoil while offering shareholders a 3.8% dividend yield.

As the virus continues to spread, we expect to see reduced consumer demand for away from home food in the near-term impacting General Mills primarily where it has Asian and Latin American exposure as well as its direct Convenience Stores & Foodservice segments. In Asia, while most of its shops are now open again, but many have reduced hours in service and store traffic is still down roughly 60% during the month of March, according the most recent conference call. At the same time, management expects to see greater near-term demand for food at home, primarily impacting its North America Retail and Europe and Australia segments. On the call, management asserted that is has seen increased customer orders and higher retail sales takeaway in Nielsen-measured channels since the beginning of March. The company’s U.S. retail sales results for the week ended March 7 were up low double-digits, including Pet. While we assume this short-term stock up demand will ebb in the coming months, our expectation is that overall at-home food demand will remain elevated, while away from home exposure, like the Haagen Daaz brand for example, will suffer. With that said, the overall impact of the virus is expected to lead to increased organic sales and the company still sees an increase in earnings. That is a stark contrast to many companies globally, so this defensive stock seems like an opportunity to sit on a solid dividend yield and possibly some share appreciation.

Shares were a bit volatile after earnings, but are likely to resume sideways action once things settle down. On the long side, there is value here worth buying for the dividend yield of 3.8% and likely some capital gains. We believe that the stock would normally be a hold, but given the price action in the stock and demand for people needing to stock up (or feeling said need), we think there is opportunity for either a trade or a meaningful long-term investment at these levels. In short, the next pullback would be a good spot to consider deploying some new capital. It is not a get rich quick play, but one that should provide a positive return this year. We believe this is the case given the dividend, recent and projected performance, and possible opportunities for company growth.

The stock rallied early in 2019 and has been trading mostly sideways since then, with the exception of the fall where a brief selloff ensued. Since the start of the U.S stock market’s fall at the end of February, GIS stock has held up well. At 3.8%, the yield is attractive given the stability of the stock. We do not consider this to be a high-yield name but it is above-average yield. Even at these levels, we still encourage reinvestment of dividends to compound growth. Make no mistake, historically, General Mills has been considered a dividend raiser for over a decade, hiking the payout each year. We like that. but at these levels, too much equity risk for the underlying company exists. The name is attractive to some because the dividend has been consistently raised up until 2019. The dividend growth was clear before that, but the company faced a lot of problems in 2018. We think it has improved, and in this tumultuous market finding opportunity can be hard. But, people need to eat. Performance in and of itself had started to recover prior to the market meltdowns of the last few weeks.

Earnings were better, mostly, than what was expected from the consensus estimates. We had no real expectations other than expecting sales to be relatively flat to within 2% of last year, based on historical performance. It was slightly positive to see that the company beat against these expectations on the earnings line, thought it was a touch short on revenues.Let us delve further.

Sales came in at $4.18 billion, missing consensus estimates by $27 million. This was one of the weaker points on the quarter, whiffing on the top line. Sales have consistently just missed estimates over the last year. Revenues were down 0.4% from last year, and the revenue trends are somewhat positive the last 4 years: 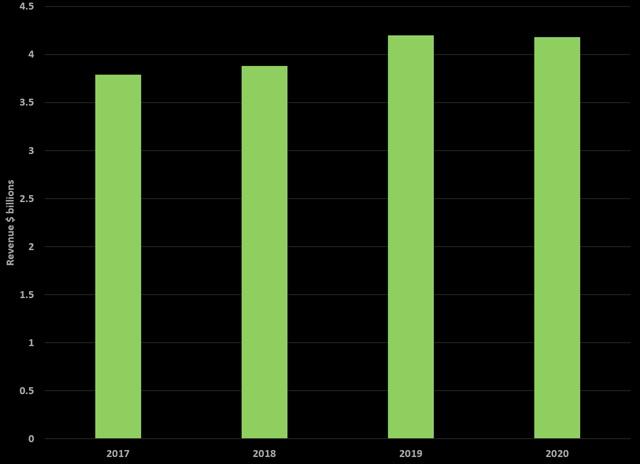 The overall sales trend is improving, despite the year-over-year slight decline. A massive restructuring last year took place and moves had been made to acquire a pet line. In the just-reported quarter, some currency issues weighed, but organic sales were once again limited. Organic sales were flat. However, most of this was driven by price increases, a strategy the company continues to turn to over and over.

READ ALSO  Is The Dis-Uniting Of America Now Inevitable?

Price hikes have offset declines in volumes. Looking more closely at the data, we see that there were significant volume reductions to be aware of. Volume was down 1 points in Europe and Australia. In addition, Asia and Latin America saw declines, with volumes down 2 points. One small saving grace was that in North American retail, with flat volume as well as pet which saw a 6 point volume boost. Further, weakness in cereals as well as lack of execution in selling its innovative yogurt products has been an ongoing issue, while the input costs of these products have risen in many cases.

While the volume issues have weighed, the company’s ongoing cost savings initiatives have a small positive benefit, however they were not enough to offset supply chain costs and inflation. Gross margin narrowed 80 basis points to 33.6% this quarter. Even when we adjust for some of the items impacting the ability to compare to last year, we see an decrease. Adjusted gross margin fell 30 basis points to 33.9%.

So we saw slightly reduced sales, and lower margins. How can this be good? Well operating profit was in line with last year and operating margin increased 10 basis points to 15.6%. We think this positive result is good, but overall margins cannot rely on pricing. That is where the current situation in the world comes into play. We will see some substantial volume moves in Q4 we surmise. Given the results on operating profit, earnings beat expectations: 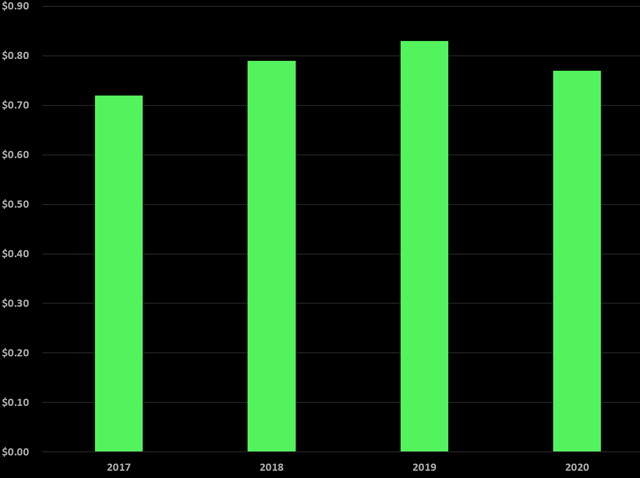 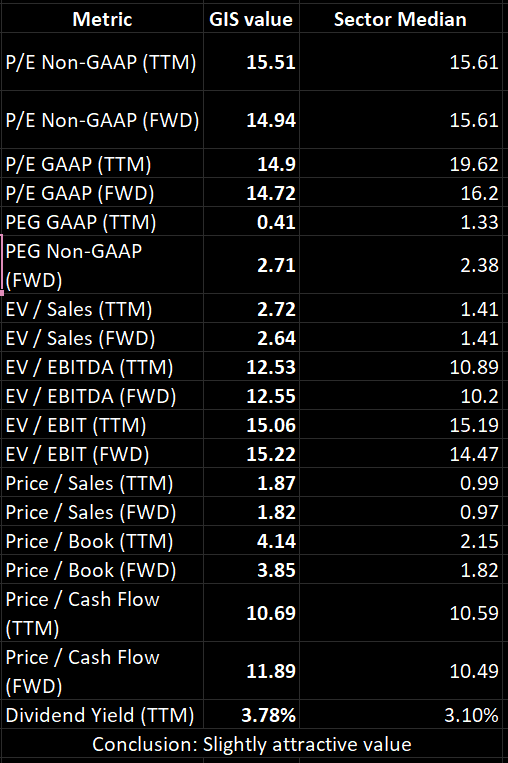 From a value perspective overall, General Mills is attractive here. While the company still has an above-average dividend yield, it is not high by any means, but in this environment it is safe. Enterprise value-to-sales on both a trailing basis and forward basis are not enticing. On a simple price-to-earnings ratio, the stock still has some value, but on most other metrics, the name is either average value or overvalued. At $51, this is slightly attractively valued but at $47-$48, it would be attractive. That said, the stock is to be bought for the dividend and stability. If you can get the discount, it is a good defensive play in our opinion

READ ALSO  Peter Schiff: Give the Government an Inch; It Takes a Million Miles

General Mills is stabilizing, and that is a positive. The company is going to get a volumes boost this quarter with the COVID-19 pandemic driving many to “stock up.” Growth in some of the key metrics represents a huge turnaround from where the company was just 18 months ago. Penetrating international markets even deeper and effectively managing its pricing while properly advertising will be the simplest path to continued success. The world’s population is growing, so the customer base for General Mills also continues to grow. Regardless of global economic fears, or health concerns over the pandemic, people need to eat.

Quad 7 Capital is a top author on Seeking Alpha and has generated over 1,000 profitable ideas since 2012, so if you like the work scroll to the top of the article and click the orange follow button.

Let us help you navigate this awful market. Get a 50% off discount now

Like our thought process? Stop wasting time and join the community of 100’s of traders at BAD BEAT Investing at an annual 50% discount.

It is simple. We turn losers into winners for rapid-return gains

Disclosure: I/we have no positions in any stocks mentioned, but may initiate a long position in GIS over the next 72 hours. I wrote this article myself, and it expresses my own opinions. I am not receiving compensation for it (other than from Seeking Alpha). I have no business relationship with any company whose stock is mentioned in this article.

Previous PostGlobal Pandemic Preparedness – Which Country Is The Most (And Least) Ready For COVID-19?Next PostGerman churches overcoming coronavirus isolation