Geely has developed a system for building electric cars that it plans to sell to rivals, aiming to provide one of a handful of global battery systems expected to dominate the industry in the coming decades.

The Chinese carmaker behind Volvo and Lotus is already in talks with several other car manufacturers to license the technology, including Mercedes-Benz owner Daimler, in which Geely holds a stake.

The new architecture offers higher driving ranges of up to 700km and lighter vehicles and can be used to make any size of car from two-seaters to large minibuses carrying a dozen people.

As the industry shifts from traditional engines to battery power, carmakers are working together more closely to avoid duplicating investments into expensive battery technology.

VW and General Motors have both developed electric technology they hope to sell to competitors. Ford has already agreed to use VW’s system on some cars, while Honda plans to use GM’s battery technology.

Geely, with its global system that aims to underpin cars sold anywhere in the world, is the latest car group to join the race to develop this kind of technology.

The company has harboured global ambitions since buying Volvo from Ford in 2010, adding other brands including London black cab maker LEVC, Lotus and Proton to its ranks.

“Our development of this transformative electric vehicle architecture marks the biggest leap forward at Geely in more than a decade,” said Li Shufu, Geely chairman.

“We had a very high ambition from the beginning, to cover everything,” Kent Bovellan, who built the platform at Geely, told the Financial Times.

“Sometimes you wonder why manufacturers all do their own everything, you wouldn’t all make Microsoft yourselves,” he added. 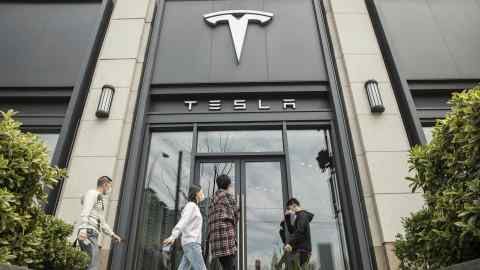 All of Geely’s brands have committed to using the system for future electric vehicles.

Mr Bovellan confirmed discussions included Daimler, in which Geely holds a 10 per cent stake, but declined to offer more details.

Talks with other manufacturers also include a North American group and several European ones.

By building the system from scratch, Geely aims to achieve better performance than simply adapting an existing car platform for electric vehicles.

The company used Geely’s global network of research centres in the development, with teams in the UK, Germany, Sweden and China working in parallel. It also cut development costs of the system by 40 per cent.

Mr Bovellan claimed the system gave better acceleration and braking, elimination of road noise, and vehicle stiffness — a key attribute of safety and performance — than other cars.

The first Geely car to use the technology will be a large saloon from Lynk & Co, the company’s new electric brand aimed at younger drivers, that will be produced next year.