GDX: Profit From This Year’s Paradigm Shift In Metals (NYSEARCA:GDX)

Precious metals markets have been trading under pressure for three-straight weeks, and, for the first time since the middle of July 2020, this has caused the price of gold to fall below important psychological support at the $1,800 level. If these trends continue, instruments like the VanEck Vectors Gold Miners ETF (NYSEARCA:GDX) could see further declines after breaking key support near the $37.50 level.

However, we continue to hold a bullish view on the mining sector because it’s likely to benefit from the unprecedented macroeconomic uncertainties that still exist around the world and the strongly positive momentum that still exists in the market’s long-term gold price valuation trends. 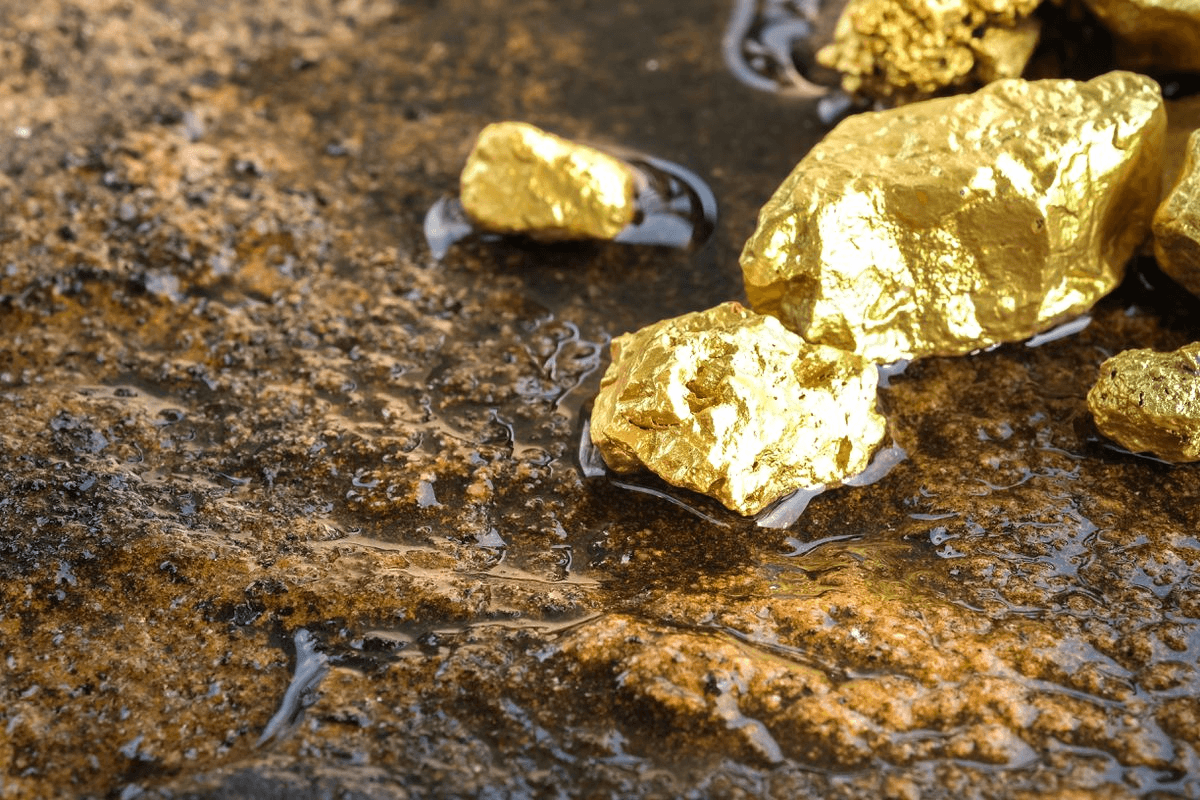 Over the last few weeks, activities throughout the precious metals sector seem to have taken on a decidedly bearish tone ever since the initial coronavirus vaccine news was released by Pfizer (NYSE:PFE) on November 9, 2020.

The total effects of these developments have been widespread, as gold prices immediately posted their worst daily declines in nearly three months and stock benchmarks (including the generally sluggish Dow Jones Industrial Average) pressed onward toward record valuations. 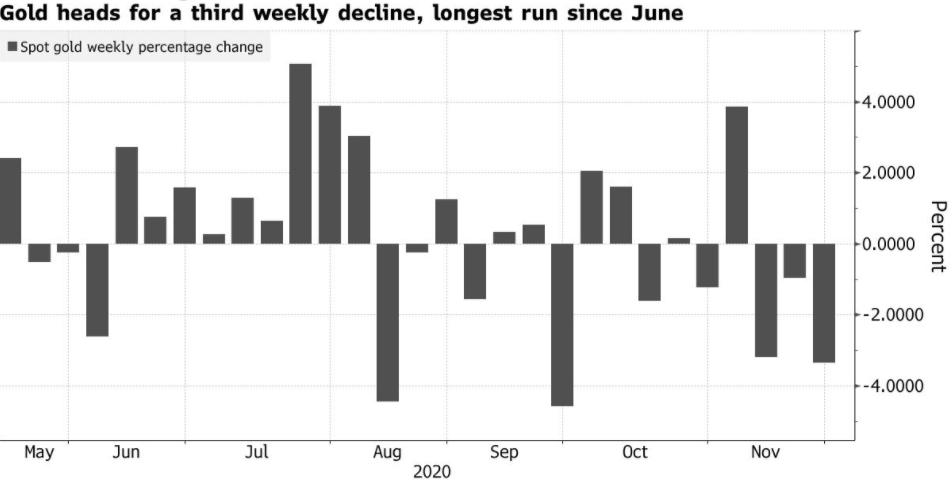 However, these levels of stock market optimism have always seemed extreme in our view and it now looks as though the analyst community is starting to show a better acknowledgement of the true economic risks that might soon develop in the United States.

Specifically, JPMorgan economists now expect to see a “grim” winter period that will likely cause another economic contraction during the first quarter period in 2021.

If these expectations turn out to be accurate, we believe that investors will see another surge in safe-haven buying activity in precious metals markets. Of course, this means that we expect to see much higher gold prices next year but it also means that instruments like the VanEck Vectors Gold Miners ETF could see significant rallies as positive sentiment returns to these sectors of the financial markets.

In part, our stance is based on the diverse regional exposure that is offered by GDX. Specifically, the bulk of the fund (nearly 56.6%) is centered in Canada and another 14.2% of the fund’s exposure is centered in Australia. Of course, this means that 15.82% of the exposure offered by the VanEck Vectors Gold Miners ETF is still centered in the United States but even these allocations seem relatively stable given the quarterly earnings performances we have seen from several stock components contained within the fund.

However, at this stage, most of our attention remains focused on Newmont Corp. (NYSE:NEM) and Barrick Gold Corp. (NYSE:GOLD) because these two stocks make up more than 23.5% of the fund’s current valuation. In addition to this, both stocks have seen substantial declines over the last three weeks and this suggests that investors have new opportunities to buy into both of these names at levels that are relatively inexpensive.

In both cases, we have examples of declining mining stocks with clear precious metals exposure that have recorded favorable earnings results in the most recent quarterly reporting period. In spite of this favorable environment, NEM has lost nearly 20% of its value just since the beginning of August. In a similar trend, GOLD has lost more than 27% of its value since the middle of August.

More than likely, these declines in share prices have been propelled by a decline in sentiment within the precious metals sector as a whole (rather than as a result of a decline in expectations for these individual mining companies).

At the same time, the VanEck Vectors Gold Miners ETF has convincingly fallen through support levels near $37.50 and this might be even better evidence that valuations throughout the gold & precious metals sector have undergone a major downside reversal over the last few weeks. 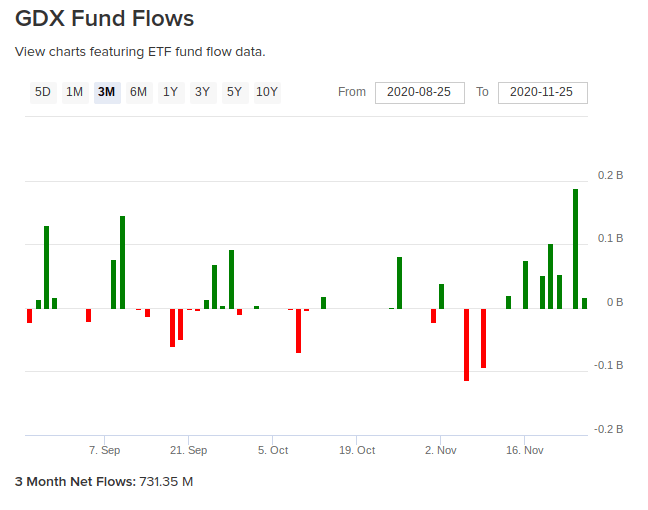 But if we take a somewhat longer view and look at GDX over a more extended time period, a very different picture begins to emerge.

During the last three-month trading period, the VanEck Vectors Gold Miners ETF has generated net inflows of 731.35 million. More importantly, we can see that the greatest selling pressures emerged after the Pfizer vaccine news was released on November 9th. 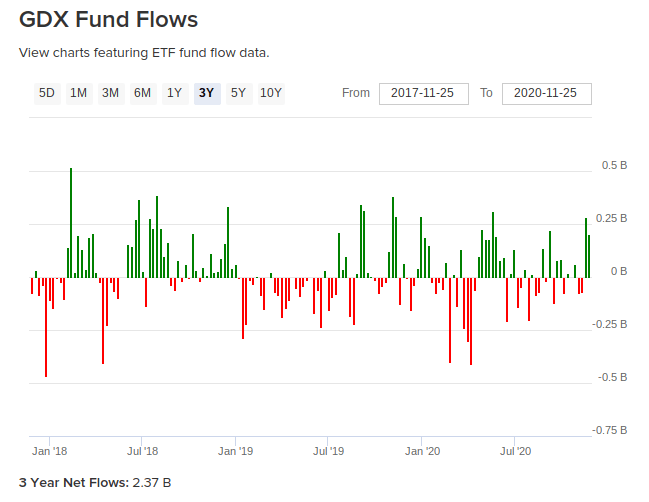 In our view, this suggests that the market is simply undergoing a temporary reaction to a news event and that further downside in GDX seems unlikely because any additional vaccine announcements would probably do little to change the underlying environment.

Moving out to an even longer-term view, we can see further evidence that these assertions are accurate because the VanEck Vectors Gold Miners ETF has actually generated net inflows of 2.37 billion during the last three years.

All together, these trend divergences tell us that investors might have an opportunity to profit from recent paradigm shifts in the precious metals markets. While this short-term enthusiasm might be moderately favorable for U.S. stock benchmarks into the end of 2020, we think that the prospects for economic deterioration during the first-quarter period of 2021 might be enough to send investors right back into safe-haven assets.

Ultimately, the VanEck Vectors Gold Miners ETF provides an alternative strategy for investors that are interested in moving deeper into the precious metals sector and its expense ratio of 0.52% remains near the middle of the range for the category as a whole.

Thank you for reading. Now, it’s time to make your voice heard.

Reader interaction is the most important part of the investment learning process. Comments are highly encouraged! We look forward to reading your viewpoints.