Gabelli Dividend & Income Trust (GDV) is a closed-end fund that has offered attractive returns over the longer term. However, on a YTD basis and over the last couple of years, the fund has really struggled. This has been on both a share price basis and a NAV basis. The underperformance relative to the SPDR S&P 500 (SPY) really started in 2018. This then continued in 2019 with SPY’s total NAV return of a whopping 31.29%. GDV was able to have a total NAV return of 24.54%, which is typically quite respectable but comparatively speaking is rather disappointing.

A reason for this underperformance is the fund’s tilt towards holding a higher allocation to the financial sector. I’ve covered several pieces lately talking about the financial space; one on BlackRock’s Enhanced Equity Dividend Trust (BDJ) and another on John Hancock’s Financial Opportunity Fund (BTO) – a fund with a primary focus on the financial space.

GDV also conducted a rights offering last year, in November. That saw the fund offer new shares that slightly diluted shareholders. In all, this didn’t move the needle for the fund in a massive way since there was a floor put in place. In fact, the offering was oversubscribed and exceeded the amount available. I would say that it was quite a successful raising of capital for the managers. 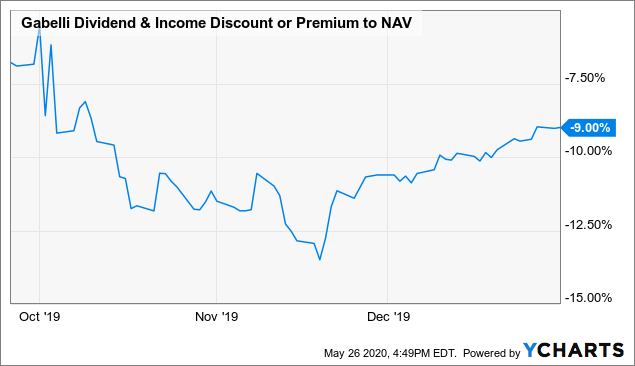 In fact, we saw from when the fund announced its rights offering on September 23rd to the end of 2019 – the discount hadn’t really ticked all that much wider before closing that gap again.

Since then, the fund’s discount has begun to widen again back to slightly over 11% to the current 11.09%. I believe that this fund might be attractive to pick up at these current levels due to this discount, plus the fact that the financial space has been hit harder than most sectors through the COVID-19 sell-off. It is no secret that I am leaning towards favoring investments in the financial sector as I’ve mentioned in those previous articles. The sector has been hit hard. This is certainly for good reason as their earnings will struggle in a recession environment. However, an investor looking at the next 2 to 5 years might be rewarded.

GDV can be an even better fit, a bit like BDJ, in that it is more diversified for those that might not be interested in something as pure-play as BTO. GDV also holds several other sectors that are actually quite defensive and are parts of the portfolio that should be performing well on a YTD basis.

The fund is described as “a diversified, closed-end management investment company whose objective is to provide a high level of total return.” Their investment policy is to “under normal market conditions, the Fund invests at least 80% of its assets in dividend paying or other income producing securities. In addition, under normal market conditions, at least 50% of the Fund’s assets will consist of dividend paying equity securities.”

This leaves the managers quite free to invest how they would like. It also makes the fund quite similar to BDJ as that is another fund that is diversified across several sectors. The real difference with GDV is the fact that it is a leveraged fund, whereas BDJ is an option based fund. This does increase the overall risk of GDV, in my opinion. As we saw what leverage can do to create even more volatility when in a market crash.

This investment policy also makes them quite a “plain” equity fund. This can be easily compared with the performance of something like the SPY when evaluating the fund. Of which we will look at the previously mentioned underperformance, which is a mark against the fund. Although, the SPY also doesn’t pay investors a monthly distribution either. The distribution consists of a large portion of capital gains as one has come to expect with most equity CEFs.

The fund utilizes leverage in the form of preferred offerings. I had previously covered when they redeemed the remaining amount of their Series D Preferred Shares. In April, they also began redeeming half of their outstanding 5.875% Series A Cumulative Preferred Shares too. Unlike when they announced the redeeming of all their outstanding D preferred shares, the price of their A shares didn’t drop significantly. In fact, they have risen back to well above the par value of $25 again.

I would partially blame that on the fact that shares had already come down significantly from the sell-off and since it is only a partial redemption.

This brings the fund to total managed assets to over $2.2 billion. This large size helps to bring the total average daily trading volume to almost 550,000 shares a day. That is a significant amount in the CEF world and it probably doesn’t hurt that it is a Gabelli fund for further name recognition.

The last reported expense ratio of the fund was at 1.21%. In other leveraged funds, we would look at a total expense ratio that would also include leverage expenses. In this case, since it is all preferred stock, those dividends are not considered an expense. However, they do take away from common shareholders. Preferred shareholders took $24,833,499 million in payouts for 2019.

For some context on GDV’s underperformance, we can take a look at the YTD performance. This will include both the total NAV return and the total price return. We can then compare this performance with the SPY. Which I believe is an appropriate benchmark considering that they are quite a plain equity fund.

We do see that the fund has significantly underperformed this year. This is reinforcing what I had mentioned above – that the financial sector is becoming a drag on performance this year.

Where we really started to see the fund struggle relative to SPY was at the end of 2018. This isn’t a surprise as 2018 witnessed its own financial sell-off throughout Q4. In fact, the chart is showing that if you held GDV over the last 3-year period that you have slightly lost money holding all that time. 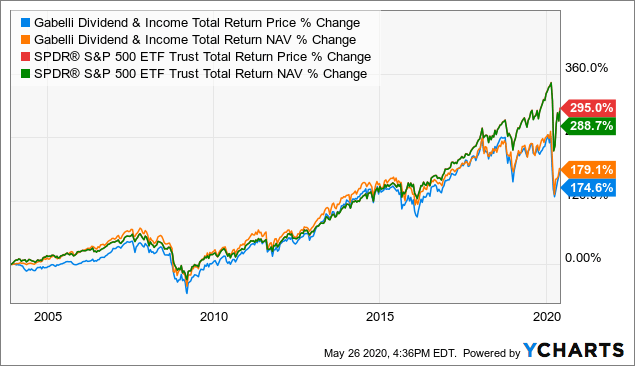 Since the inception of the fund, on November 28th, 2003, we can see that GDV had actually traced SPY quite well. Only seeing that wide divergence appearing since ~2018.

One of the major reasons for this underperformance is the fund’s holdings in the financial sector. This has been the case all the way back to when I first covered the fund on April 30th, 2018. Unfortunately for me, that is about when the fund started to perform quite poorly. 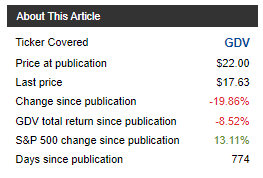 The financial sector has been incredibly weak for 2020 as the Fed cut rates to near 0% on top of the fact that we are very likely in a recession. So, it isn’t too much of a surprise the weakness we see in that sector. The financial space is a highly cyclical one that relies on a robust economy that is growing. This in turn would mean that more loans and other various financial services are being used. Thus, increasing this sector’s profits. 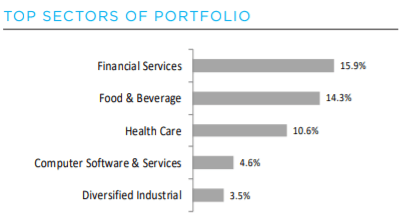 With that being said, not all of its top ten holdings are in the struggling financial sector. 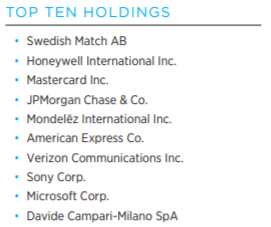 It might also be interesting that its top holding is a tobacco company that has been performing quite well. The company “develops, manufactures, markets, and sells snus and moist snuff, lights and other tobacco products.” This is quite interesting considering that many of the largest tobacco companies are struggling. However, the core products are chewing tobaccos that haven’t been hurt nearly as much by the trend of quitting smoking. 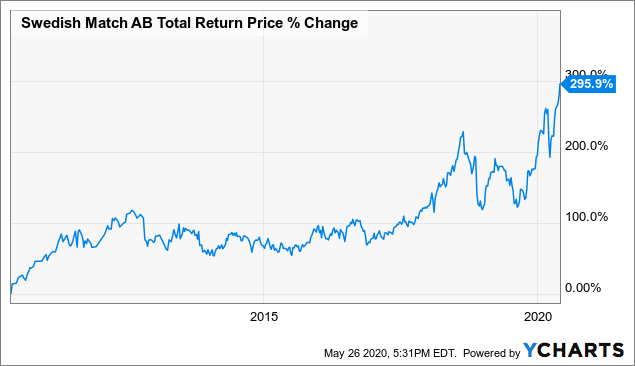 Its top ten holdings actually only include two financial companies; JPMorgan (JPM) and American Express Company (AXP). AXP and JPM have both been building reserves for their anticipated credit losses. This played a role in their weak earnings reports.

One positive sign is that Jamie Dimon, CEO of JPM, said: “banks may not need to build more loan loss reserves in H2.” This could indicate that he believes the worst is behind us at this point.

This should, in turn, be good news for GDV holders. I would anticipate that since they have a low turnover of ~16% that these same positions might be with us for a long while.

The fund currently has a distribution rate of 7.76%. This is paid monthly at a payout of $0.11 per share. This has been the same rate for several years now. I also don’t anticipate them needing to cut at this time as the NAV’s distribution rate is a reasonable 6.90%. This is even after considering the fund’s significant drop for the year.

Another factor in my anticipation of not having to cut their distribution is the fact that Gabelli generally is one of the fund sponsors that will put this off as long as possible.

That usually isn’t something to hang your hat on; however, Gabelli and PIMCO have been similar in this regard. Of course, like anything in investing, history is not a guarantee of future results. Another positive I would conclude from their distribution history is that even during the depths of the GFC of 2008/09, they still maintained the monthly payout. This is quite attractive for an income-focused investor.

When taking a look at the fund’s tax character breakdowns for the prior couple of years – we do see that the fund has paid out portions labeled as a return of capital or ‘ROC.’ In the case of 2019, since the fund’s total NAV return was over 24.50%, this wouldn’t be considered destructive ROC. In 2018 though, one could technically say that they relied on destructive ROC to fund their distribution since the fund’s NAV dropped in that year. Of course, this wasn’t the only fund that had a rough 2018 but was one that suffered a bit more due to the fund’s portfolio composition.

GDV can be quite an attractive fund for an income-focused investor that is looking to take monthly distributions from a simple equity fund. We would like to see a fund like this outperforming SPY as that is an appropriate benchmark. However, I believe this underperformance is coming from the fund’s overweight in the financial space.

Even Jamie Dimon is sounding a bit more optimistic overall later this year, considering where we have come from just a few months ago. I wouldn’t say we are out of the volatility yet this year, and one can expect the wild ride to continue!

Disclosure: I am/we are long GDV. I wrote this article myself, and it expresses my own opinions. I am not receiving compensation for it (other than from Seeking Alpha). I have no business relationship with any company whose stock is mentioned in this article.

Additional disclosure: This article was originally published to members of the CEF/ETF Income Laboratory on May 27th, 2020.