We were discussing G1 Therapeutics (GTHX) in our TPT member chat yesterday. It has been a depressed stock for over a year now, and even today, despite having a PDUFA date in less than 3 months, the stock shows little sign of improvement. Lead drug candidate trilaciclib is a myelopreservation agent supporting chemo regimens that have shown enough data in phase 2 trials that the FDA has allowed GTHX to proceed to an NDA directly from there without requiring a phase 3 trial. Rintodestrant, their second asset, is in early stages of developing but targeting a larger opportunity in breast cancer and is going to announce a major update on December 9; and yet, the stock shows no sign of improvement. 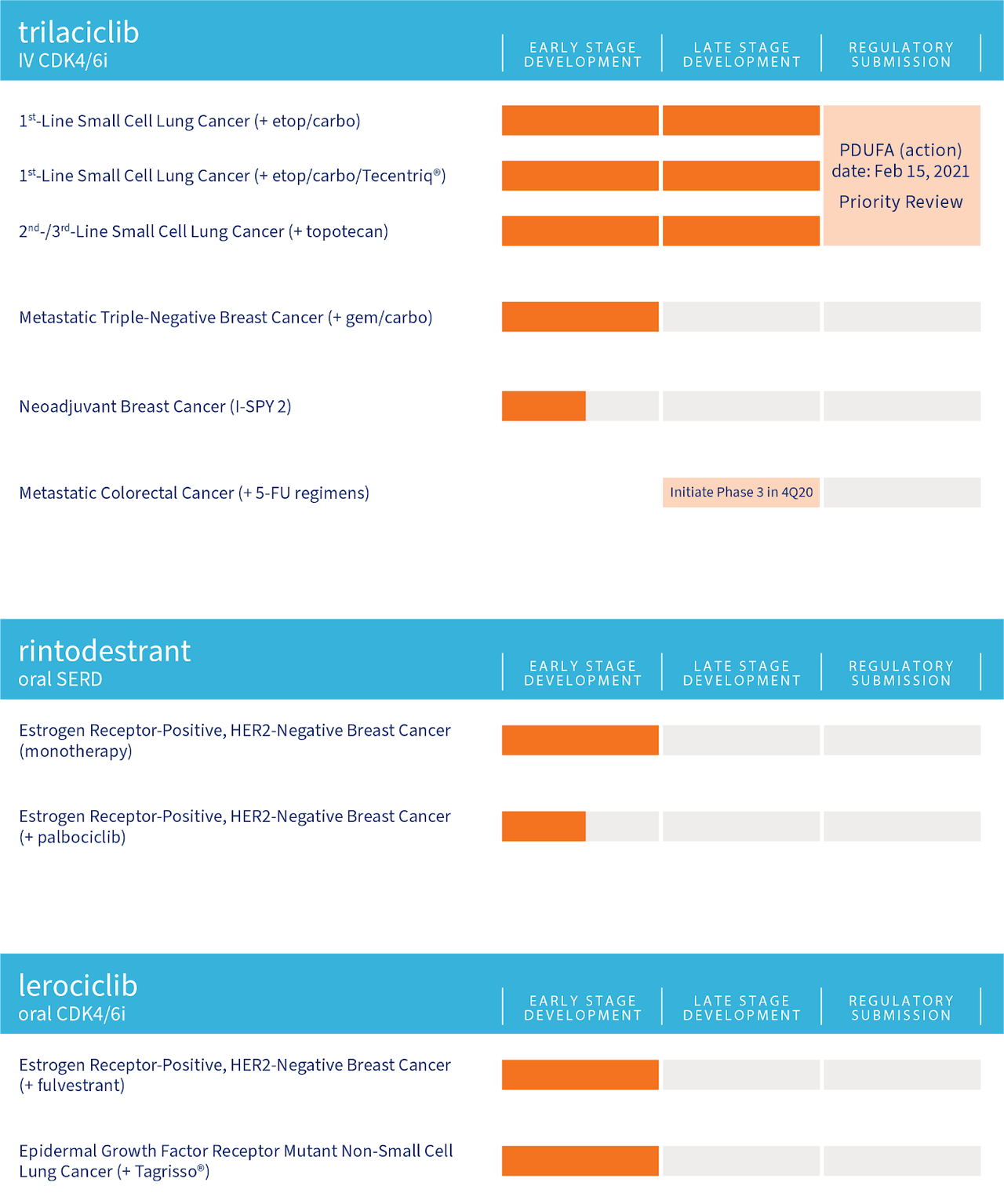 I covered trilaciclib a year ago. There is not a lot to be added to that except that their NDA was accepted by the FDA on August 17 with a PDUFA date for February 15, 2021. The NDA was accepted under an accelerated review program, which is why PDUFA is occurring in 6 months instead of the regular 10. The Priority Review is based on positive data from three randomized clinical trials showing robust myelopreservation benefits for the drug.

“There are currently no available therapies to protect patients from chemotherapy-induced toxicities before they occur,” said Raj Malik, M.D., Chief Medical Officer and Senior Vice President, R&D. “If approved, trilaciclib would be the first proactively administered myelopreservation therapy that is intended to make chemotherapy safer and reduce the need for rescue interventions, such as growth factor administrations and blood transfusions.”

Trilaciclib also has a Breakthrough Therapy Designation – meaning preliminary clinical evidence for trilaciclib shows a clear advantage over available therapy. In the NDA acceptance letter, the FDA also stated that it is currently not planning to hold an advisory committee meeting for the drug.

Another important development is trilaciclib’s expanded access program, which means the company is making the drug available to patients while it undergoes the approval process. The EAP usually means the drug is so beneficial that it is unethical to make patients wait even a few months to get it. This is an important development because it shows the value of trilaciclib.

As for the total addressable market or TAM, over 25,000 people in the U.S. and Puerto Rico are diagnosed with SCLC every year. Approximately 90% of SCLC patients receive first-line chemotherapy treatment, and approximately 60% of those patients receive subsequent second-line chemotherapy treatment. That means, there are 22,500 patients in the 1st line setting who will benefit from trilaciclib, and another 13,500 patients in the 2nd line setting. That is a total of 36,000 patients. From research available last year, cost of chemotherapy treatment for SCLC patients was around $60,000. If we assume a 10% cost for trilaciclib, then we have $6000 per patient. So, every year, they are looking at a TAM of $216mn in this one indication in the US. With Boehringer’s involvement, we can safely assume a 10% penetration within the first two years of approval, especially given the breakthrough designation. So, that is $22mn from the US; similar figure for Europe, and another such figure from the RoW will give us $60mn in about 3 years, with increasing penetration of the market.

This is a conservative estimate. As I wrote in my earlier coverage:

This vast cohort of patients can benefit from trilaciclib in combination with chemotherapy. The company estimates the target market to be at $3bn.

Trilaciclib is also being evaluated in other cancers. From their press release:

On November 18, the company announced that final overall survival data from the mTNBC trial was consistent with the above preliminary findings announced last year, and showed that “trilaciclib significantly improved median OS for patients treated with trilaciclib in combination with a chemotherapy regimen of gemcitabine/carboplatin.”

They will initiate a pivotal trial in mTNBC in 2021 with OS as the primary endpoint.

Trilaciclib is being evaluated in neoadjuvant breast cancer as part of the I-SPY 2 TRIAL, and the company expects to initiate a Phase 3 trial in patients treated with chemotherapy for colorectal cancer in the fourth quarter of 2020.

In the same press release quoted above, GTHX also announced that it will provide an update on Rintodestrant at the 2020 San Antonio Breast Cancer Symposium (SABCS) to be held virtually on December 9, 2020. Specifically, they said “The company will also present updated monotherapy findings from the Phase 1 portion of its ongoing clinical trial of rintodestrant, a potential best-in-class oral selective estrogen receptor degrader (SERD) in development for treatment of ER+, HER2- breast cancer.”

It seems they will provide pk/pd and mtd (maximum tolerated dose) data, with probable comments on early signs of efficacy. Primary outcomes are dose limiting toxicity and phase 2 dose determination. secondary outcomes are about efficacy, specifically tumor response with RECIST, and pk/pd. Before competitor fulvestrant went generic last year, it had $541mn annual sales. This indicates the potential for Rintodestrant.

I am providing below the entire abstract on Rintodestrant – there will be three of these but this is the critical one.

Background: Rintodestrant (G1T48) is a potent oral selective estrogen receptor degrader (SERD) that competitively binds to the estrogen receptor (ER) and blocks ER signaling in tumors resistant to other endocrine therapies. Preliminary results from Part 1 dose escalation showed robust target engagement on 18F-fluoroestradiol positron emission tomography (FES-PET), a favorable safety profile, and encouraging antitumor activity in patients with heavily pretreated ER+/HER2- advanced breast cancer (ABC), including those with ESR1 mutations (Dees et al., ESMO 2019 [abstract #3587]). Here, we present updated results from dose escalation and expansion (Parts 1 and 2). Methods: This Phase 1, first-in-human, open-label study evaluated rintodestrant monotherapy in women with ER+/HER2- ABC after progression on endocrine therapy. Part 1 was a 3+3 dose escalation (200- 1000 mg once daily [QD]); Part 2 expanded 600 and 1000 mg QD; and Part 3 was added to assess rintodestrant with palbociclib in patients in earlier lines in the advanced setting. Primary objectives included dose-limiting toxicities (DLTs), maximum tolerated dose (MTD), safety, and recommended Phase 2 dose. Secondary objectives included pharmacokinetics and antitumor activity (RECIST v1.1). Exploratory objectives included pharmacodynamic inhibition of ER target engagement (FES-PET), mutation profiling (cell-free DNA [cfDNA]), and change in ER expression from baseline to on-treatment tumor biopsies. Results: As of May 13, 2020, 67 patients (Part 1: n = 26; Part 2: n = 41) were treated, with a median age of 61 years (range 34-83) and ECOG PS of 0 (49%) or 1 (51%). Median number of prior lines in the advanced setting was 2 (range 0-9), including prior fulvestrant (64%), CDK4/6 inhibitor (69%), mTOR inhibitor (22%), and/or chemotherapy (46%). Median number of prior lines of endocrine therapy in the advanced setting was 2 (range 0-5), with 61% of patients having received ≥2 lines. Treatment-related adverse events (TRAEs) were reported in 70% of patients. The most common TRAEs in ≥10% of patients included hot flush (24%), fatigue (21%), nausea (19%), diarrhea (18%), and vomiting (10%), mostly grade 1 or 2. No DLTs were reported and MTD was not reached. Dose reduction due to TRAEs occurred in 1 patient (1%), with elevated transaminases (grade 3 ALT and grade 2 AST) at 600 mg. Serious TRAEs occurred in 2 patients at 1000 mg (grade 5 cerebral hemorrhage in the setting of low molecular weight heparin and grade 2 upper abdominal pain). Two patients (3%) discontinued treatment due to TRAEs. Overall, the frequency of patients with TRAEs at 800 mg was comparable with that at 600 mg (57% vs 63%) and less than that at 1000 mg (81%). Of 67 patients, 16 were on study treatment for ≥24 weeks and 3 (n = 1 at 600 mg; n = 2 at 1000 mg, including 1 with ESR1 mutation) had a confirmed partial response (clinical benefit rate [CBR]: 28%). FES-PET standard uptake values decreased at week 4 with a mean reduction of 87% (±8%) at doses ≥ 600 mg. Of 59 patients tested for baseline cfDNA, 41% harbored ≥1 ESR1 mutation, with a similar CBR in both groups (33% in ESR1 mutant and 29% in ESR1 wild-type). Seven of 9 patients had a decrease in ER immunohistochemistry H-score at both 600 and 1000 mg (median [range]: -27.8% [-33.8%, – 3.4%]), irrespective of ESR1 mutation status. Based on safety, efficacy, and ER degradation, 800 mg was selected as the optimal dose for further study. Conclusions: Rintodestrant continues to demonstrate an excellent safety/tolerability profile across all doses, with promising antitumor activity in patients with heavily pretreated ER+/HER2- ABC, including those with tumors harboring ESR1 mutations. Part 3 of this study, evaluating rintodestrant 800 mg QD with palbociclib in a more endocrine-sensitive population, is ongoing (NCT03455270).

There is not a lot to comment here. 800 mg seems to be the optimal dose, and that one patient with grade 5 cerebral hemorrhaging may be an outlier, especially with heparin in the mix, but that is something to keep an eye out for. Effect on an endocrine-sensitive population is preliminary but encouraging, and although a partial response, at this late stage in the game, that is not a bad deal. A larger trial developing the ESR1 scenario more fully is going to be interesting to watch.

According to latest reports, the company has $200-205mn in cash and cash equivalents as of the latest quarter. Burn was around $90mn last year, so with the Boehringer deal, that is not going to increase substantially, putting them in a comfortable position with a 2-year cash runway. The company recently changed CEOs, which seems to be in anticipation of approval, and nothing else.

For whatever reasons I cannot fathom, the stock remains depressed. They have a major catalyst 3 months down the line, and if past performance in trials is anything to go by, there’s considerable chance of approval. Post approval scenario, both in terms of revenue stream and label expansions/other indications, looks good. I think this is a good candidate to accumulate at this time.

Thanks for reading. At the Total Pharma Tracker, we offer the following:-

Our Android app and website features a set of tools for DIY investors, including a work-in-progress software where you can enter any ticker and get extensive curated research material.

For investors requiring hands-on support, our in-house experts go through our tools and find the best investible stocks, complete with buy/sell strategies and alerts.

Sign up now for our free trial, request access to our tools, and find out, at no cost to you, what we can do for you.