As 2020 has truly proven itself to be the year of fiscal stimulus, government regulators in Japan are being forced to address a resurgence of the COVID-19 epidemic. As a result of these events, markets remain on edge within the region and the Invesco CurrencyShares Japanese Yen Trust (NYSEARCA: FXY) has fallen by more than 5% since March 9th. But while this is an instrument that is often associated with safe haven buying, there is little reason to believe that the tide will be turning any time soon for investors holding long positions. Long-term economic data suggest that significant vulnerabilities remain throughout the region and this could send FXY into the lower 80s during the next few months. 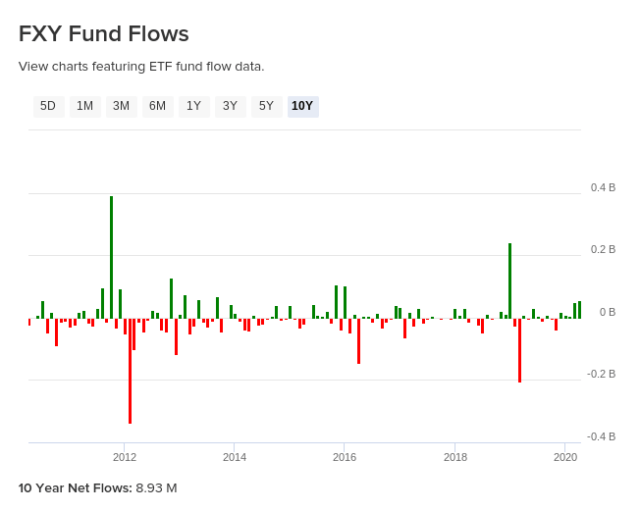 Over the last decade, net flows that have directed toward FXY are nearly flat. During this period we have seen wild fluctuations in volatility, with extremes being reached in 2011-2012, in 2016, and near the end of 2019. Aside from these periods, inflow volatility has been mostly subdued and this is why the net flows for the entire 10-year period have totaled less than $9 million. It should go without saying that this is a dismal inflow figure for such an extended period of time, so we can say that there were already significant challenges facing FXY even before the COVID-19 pandemic began to have a significant influence on global markets. 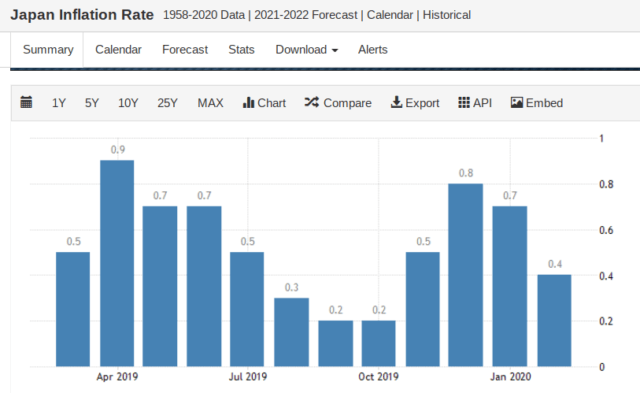 In February, consumer price inflation in Japan experience a sharp drop to 0.4% (on an annualized basis). This was roughly half of what analysts were expecting and the slowest pace since October 2019. Core inflation figures (excluding food items) dropped from 0.8% to 0.6%. Areas of pronounced weakness were visible in electricity and water fees, education costs, and fuel prices, as these sectors continue to experience deflationary trends that have remained consistent for a fairly long period of time. Overall, these figures remain firmly below the Bank of Japan (BoJ) target inflation rate of 2% and this shows that the central bank is unlikely to find itself where an increase in interest rates would be appropriate any time soon. Ultimately, this means we are unlikely to encounter any significant market catalysts which might attract investors to yen-denominated assets during the remainder of this year. 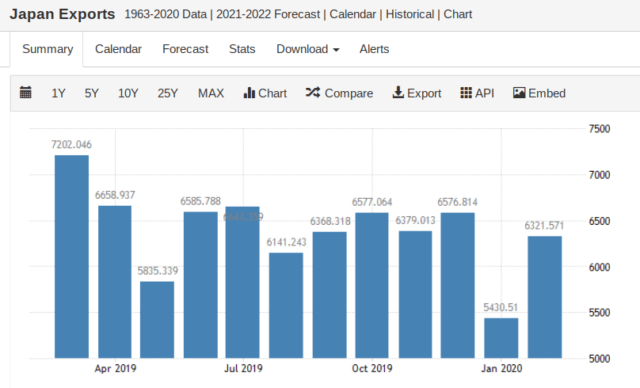 Export figures out Japan are even more concerning because the country’s trade surplus is usually one of its standout features. Export figures have experienced drastic declines since last March and we expect that the negative effects of the COVID-19 pandemic will continue to put pressure on these areas of the economy. Sales declines have been apparent in Japan for the last 15 months, and we have already seen evidence that global health concerns will not only cause damage to global supply chains but to consumer demand levels, as well. Of course, there is nothing here that resembles a bullish economic environment, and so it will be difficult to see how these scenarios could inspire much buying activity in FXY over the next few months.

Thank you for reading.

Now, it’s time to make your voice heard. Reader interaction is the most important part of the investment learning process! Comments are highly encouraged. We look forward to reading your viewpoints.