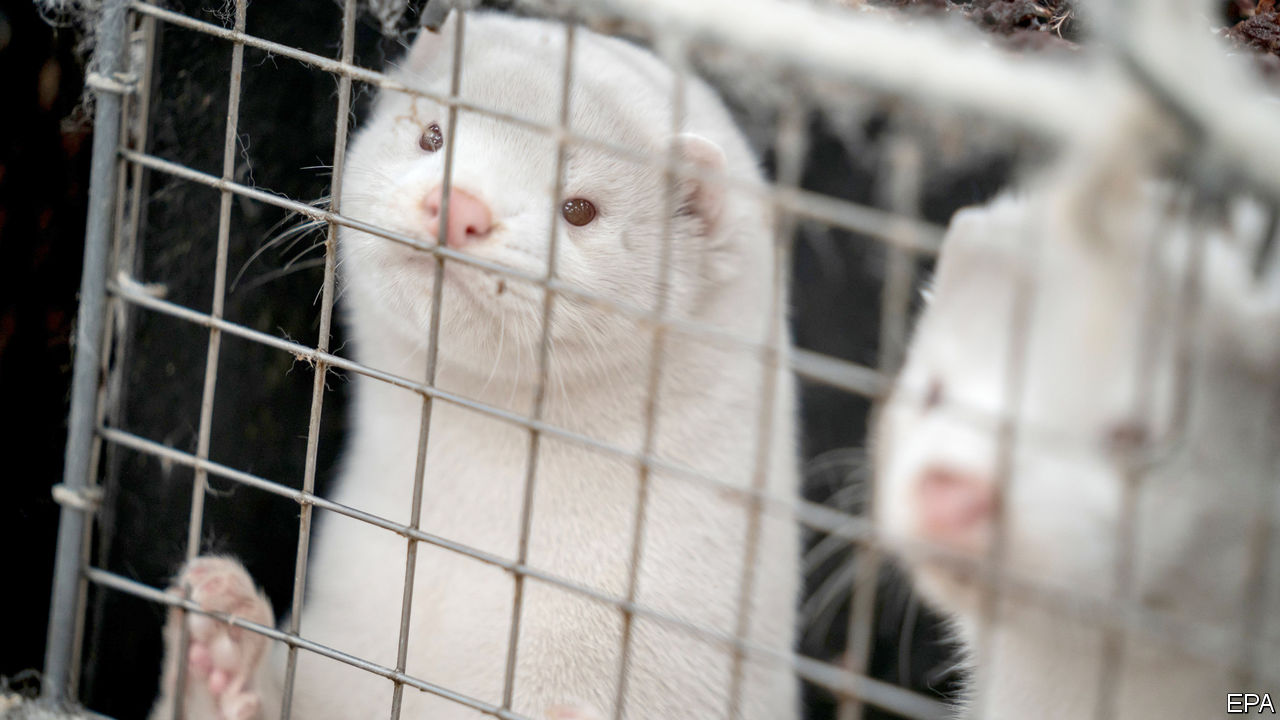 BY MID-JUNE, when the first infections turned up on three mink farms in the Danish province of North Jutland, researchers had known for weeks that the furry beasts could contract covid-19 and spread it to humans. There had already been outbreaks on mink farms in the Netherlands and Spain. As the virus spread from farm workers to a care home and others, Danish authorities did what the Dutch and Spanish had earlier done: they ordered all the mink on the infected farms culled. At first this seemed to do the trick.

But on July 7th, the Danish Veterinary and Food Administration made what may have been a fateful change to its decision: instead of culling all their animals, mink farms with covid-19 infections would merely be isolated with stricter hygiene rules. The virus came roaring back. The authority reversed itself in October and began culling again, not just on infected farms but anywhere within a 7.8km radius; but it was too late. By November 6th fully 216 farms were infected.

Worse, the virus the mink were carrying had mutated. Virologists feared that one of the new “mink variant” strains might be so different from the original that covid-19 vaccines now in development would not protect against it. The Statens Serum Institut (SSI), Denmark’s infection-control authority, concluded on November 3rd that allowing mink breeding to continue during the pandemic was a public-health risk. The following day Mette Frederiksen, Denmark’s prime minister, announced that all the country’s farmed mink—at least 15m animals, the most of any country in the world—would be killed. Seven municipalities in North Jutland with high infection rates of the mink-variant viruses have been partially closed off, with non-vital travel restricted. Culling the mink will remove a dangerous animal reservoir for the virus. More than 200 cases of coronavirus in humans have been tied to mink.

Meanwhile, scientists elsewhere are clamouring to see the SSI’s results. Mutations in viruses are routine and not necessarily worrisome, but those in the covid-19 found in Danish mink (and humans infected by them) could be more dangerous because they involve a jump across the species barrier. The SSI has found a variety of mutations, some of which affect the spikes which the virus uses to enter cells and reproduce. Many covid-19 vaccines under development are designed to stimulate an immune response towards these spikes. If the viral spike mutates it is possible, in theory, that vaccines might not protect against these novel versions of the virus.

The SSI is especially concerned about a variant it calls Cluster Five, which has four such mutations together. Laboratory tests have shown that human antibodies which fight normal varieties of covid-19 do not work as well against the Cluster Five virus.

Some blasted Ms Frederiksen and her Social Democrat-led government for indecision, since the SSI first began warning of the mutations in early September. Yet they had also been too hasty: the government had no legal power to order all the country’s mink killed, only those close to an outbreak. Ms Frederiksen apologised for the illegal order, and will need new legislation. But the conservative opposition has vowed to block the measure in parliament unless mink farmers are paid the full value of their businesses, as though they had been expropriated. Farmers said the government had slowed culls by bringing in its own personnel rather than letting them kill their own animals. “Authorities don’t work on weekends or get up early in the morning like farmers do, they work office hours,” said Mette Lykke Nielsen, head of Fur Europe, the industry’s European branch organisation.

The consequences of Denmark’s dawdling are not clear. The World Health Organisation says more research is needed to determine how dangerous the mink variants are. Denmark has begun mass testing residents in North Jutland for covid-19. Although a large portion of the cases there involve mink variants, the SSI has found none of the worrying Cluster Five variant since mid-October, though it is still looking. Other farmed animals are not as susceptible to covid-19. That makes hesitation to cull the most susceptible animal of all even harder to defend.