When Leaf Hua Li joined Shenzhen-based Tencent in 2000 as employee number 18, the tech start-up was barely known; it had not yet come up with WeChat and indeed only became a listed company four years later. But it was part of an emerging ecosystem that included Huawei, drone-maker DJI, Ping An Insurance, the Beijing Genomics Institute and others that would soon put Shenzhen on the global map and attracted the brightest young minds from all over China.

In flocking to Shenzhen, these aspiring entrepreneurs not only sought to join the tech groups that had the best prospects, they soon learned the satisfaction of receiving shares and options that would make them wealthy when their companies finally went public, enabling them to turn part of their holdings into real world cash.

When Mr Li decided to leave Tencent in 2007, he was not the first to depart; two others who had joined in the company’s infancy left before he did. They chose to retire; Mr Li decided to become an entrepreneur in his own right. Today, his online brokerage, Futu Securities, is among the most successful financial companies in China and is listed in New York, a model for how technology can change the template for the industry on both sides of the Pacific. 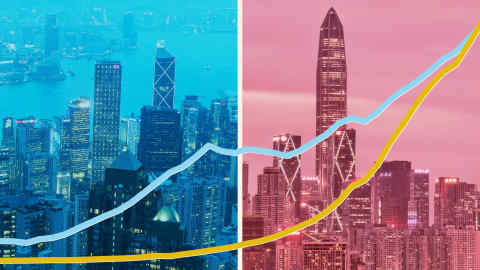 “Others were saying it was the Tencent platform that had succeeded, not the individuals. I felt self doubt,” Mr Li recalls, speaking from his office in Shenzhen, clad in the universal tech uniform of black T-shirt, and looking far younger than his 43 years. Moreover, “Pony Ma [Tencent’s founder] was young, so I knew there was a ceiling. I could never run Tencent. Also, because I had a large shareholding in Tencent, I knew I could have the financial freedom to take the risk.”

In some ways, it was unusual that a tech person such as Mr Li would choose to go into the securities business.

Indeed, Futu reflects Mr Li’s background as more of a tech person than a finance person. He majored in computer science at university in Hunan, and then he, like so many of his generation, came to Shenzhen, receiving job offers from some of the top corporates of that city, including Huawei and Shenzhen Development Bank, (now owned by Ping An). But an ad for Tencent, then an obscure start-up, caught his eye. He sent in his resume but his lack of experience meant there was no response. Undeterred, he showed up at the company, and convinced the small team there to take him on at a far lower salary than he would have received elsewhere.

After their companies listed, many entrepreneurs, like Mr Li himself, began deploying that cash in the stock market, particularly in Shenzhen, at least in part capitalising on their knowledge of technology.

Mr Li had little understanding of the workings of the equity markets — at least at first.

Often, these entrepreneurs did not have happy experiences in their early market dealings. “To open an account, the costs were so high. I paid so much in commissions. And if I tried to switch brokerage firms there was no difference in the service,” says Mr Li.

That was one of the reasons that led Mr Li to establish Futu in 2012. “There were already so many internet companies,” he adds. “But I thought if I took Tencent’s DNA in research and development I could create a better user experience [in trading equity] and gather a lot of assets.” He also took Tencent’s social community model to build a community of traders at both ends of the spectrum — the most sophisticated tech millionaires and the uneducated retail investor.

“My early clients were my colleagues,” Mr Li adds. “We leveraged technology to change the landscape.”

Mr Li’s first challenge was to raise money. His chief financial officer, Arthur Chen, recalls: “He met several famous [venture capitalist] investors and laid out his business plan and road map. It was extremely difficult to convince investors that a pure product/R&D team from Tencent without any academic financial background can build up a brokerage firm.

“Leaf’s team was in the process of the SFC (Securities & Futures Comission) brokerage licence application in Hong Kong. SFC just granted the conditional approval, when Li’s first financial backer withdrew.” One of the attractions of Futu is that by contrast to rivals in the mainland it could sell clients equities that trade in the US and Hong Kong.

Despite the self doubt, “I had no choice,” says Mr Li. “I had to put my own money — 30 per cent of my total savings — into the firm. At that time I had 10 employees, most of them from Tencent. My wife was supportive. And I knew I would regain the money.”

Soon after, he attracted his first “A” round investment from the blue-blooded group of Tencent, Matrix and Sequoia.

“Before the pitching, the R&D team had already developed a very good trading system and had received a brokerage licence [from Hong Kong regulators]. So we didn’t spend too much effort in persuading investors . . . and [they] were very easily convinced about the monetisation potential,” he says.

In retrospect, Futu’s timing could not have been better.

At the time, Mr Li and the company he founded (after two years of gardening leave) were decades behind Wall Street. But after reading Charles Schwab’s memoirs about how he took on the “clubby world of Wall Street”, Mr Li says he became convinced that discount brokerage was the appropriate model for Futu — and that “online is the way for the future”.

“He was a true disrupter,” he adds of Mr Schwab. “But this was before the internet. I thought I could engage a lot of clients through technology. The Tencent business model was all about innovation which came from the users. Connection among investors is critical. The social network is so powerful.”

Today, “Futu has become the YouTube of e-trading,” says Yu Liu, a Singapore-based hedge fund manager. “To not have access to the platform and its content when you are trading is like going into battle without bullets in your rifle. Their user-generated content is better than research reports. And it is not just one way.”

In some ways, it is tempting to compare Futu with Robinhood in the US. Like that brokerage, Futu is all about making trading affordable for ordinary people, as a matter of financial inclusion. “But we can never replicate their order flow,” Mr Li says, citing different economics. “Here the stock exchange doesn’t give rebates for orders. Hong Kong is a monopoly; they don’t want to give up the revenue for real-time prices.”

Despite the politics and the financial decoupling, Mr Li remains a fan of the US markets. He listed Futu there because there are more investors who understand discount brokerage on that side of the Pacific. “If there is no political issue, the US is still better for tech companies,” he adds.

As Futu grows, Mr Li is increasingly worried about risk management. “It becomes ever more important as we have more assets under management, and do more trading across more products,” he adds.

But there is one thing he now doesn’t need to fret about. He has his financial freedom, in part because of the shares and options he received from Tencent and the fact that his bet on online brokerage has paid off handsomely.

Previous PostNavy Pushes Ahead With 500-Ship Plan To ‘Counter China & Russia’ In Wake Of Esper FiringNext PostPNC Financial in talks to buy BBVA’s U.S. arm for over $10 billion: source