Headquartered in Lancaster, Pennsylvania, Fulton Financial Corporation (FULT) is a $24.6 billion asset holding company and parent to Fulton Bank. With its more than 3,500 employees and 230 branches, FULT offers a very wide variety of financial services throughout its five state footprint. FULT currently has operations in Delaware, Maryland, New Jersey, Pennsylvania, and Virginia.

FULT has a slightly more commercial tilt than most regional banks. At the end of the second quarter the portfolio tilt was was 75% commercial relative to being 25% retail. Within the commercial breakdown, just about half of that was commercial and industrial type loans, commercial real estate makes up about 37%, while the remaining portion (~13%) is dedicated to PPP loans.

Plain and simple: I am very bullish on FULT. The bank has a better than average credit profile and should have an expanding net interest margin (NIM) in the coming quarters. The bank is currently trading below its all-time valuation low, which was set during the depths of the last recession. I believe the 5% dividend yield is more than sustainable, even if provision expenses remain elevated. I my mind, FULT should be trading closer to 1.7x price to tangible book value per share. That would not only amount to a pretty sizable upside, but also the 5% dividend yield should compensate shareholders just for going long the stock.

During the second quarter the net interest income came in at $153 million. While this might sound like a pretty substantial amount of money, it actually marked a roughly 3.5% decrease from first quarter results. Like many other banks, FULT experienced a pretty substantial NIM contraction in the quarter, falling from 3.21% in the first quarter to 2.81% in the second quarter.

Concurrently to the precipitous drop in the margin, average earning asset increased $1.9 billion, of which $1.5 billion was associated to total loan growth. While this might sound like a significant positive to the bank, more 100% of the net growth was associated with low yielding PPP loans (totaling of $1.9 billion). When weighing all the puts and takes from these loan portfolio changes, it becomes clear that organic loan growth was actually negative, while the reported number showed a significant positive driven entirely by PPP loans.

Similar to the significantly above average earning asset growth, total average liabilities also increased nearly $1.9 billion. This level of deposit growth was only put to work with low yielding PPP loans causing the NIM to compress pretty substantially. Also, there was a pretty high level of liquidity, which by definition is unproductive to the lending margin. 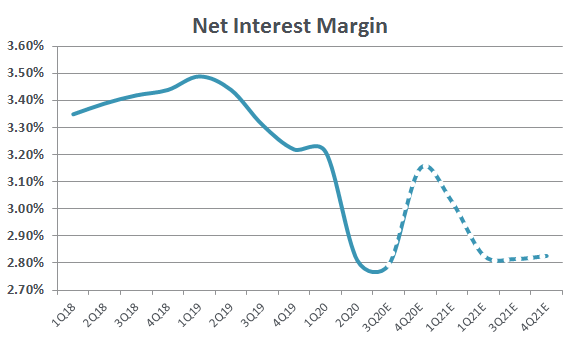 As we work our way into the back half of 2020, I believe FULT is going to drastically remix the average earning assets portfolio and put any excess liquidity to work quickly. Also the fourth quarter is likely to have PPP loan forgiveness take effect. In terms of PPP loan forgiveness, all unclaimed revenue on these predetermined 2-year loans is pulled forward. This accounting rule actually boosts the NIM temporarily, which is why the chart above has a sizable bounce for 4Q20.

After that substantial amount of “noise” takes place, I believe the margin will once again regress back towards where it is today. In my mind, I think the second half of 2020 is going to have multiple one-off events happening concurrently. After stripping it all away and getting down to the core operating metrics at the bank, in my mind, the overall NIM is likely to start 2021 where it is today.

As one can see from the “Net Charge Offs / Average Loans” chart, FULT had a pretty solid credit experience throughout the last recession. The net charge-offs ((NCOs)), while smaller than the average bank, were dragged out a little longer than average. In my mind this is better because it gave the bank more time to both generate additional income to better support equity shareholders and to work with borrows in order to do everything FULT could before charging off the loan.

That said, when investors were looking at each individual quarter as they came in 2011, it was rather frustrating to see FULT’s NCOs increase while the banking average was already on the decline. With regard to the second quarter of 2020, NCOs were just 0.09% while the first quarter had 0.26%, which marks a positive trend. 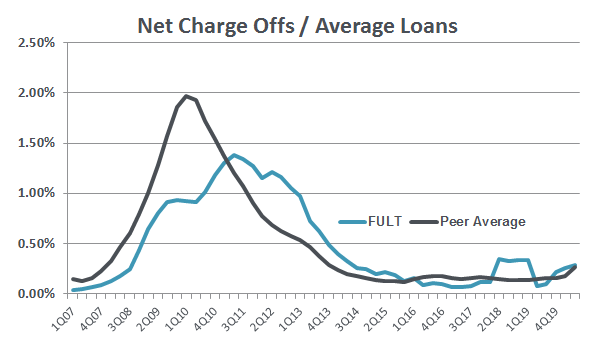 The second quarter loan loss provision expense was a little lower than I expected. It was $19.6 million, less than half of the first quarter, which was $44 million. According to the press release, the second quarter provision reflected CECL changes more than anything. In fact, management didn’t really spend much time on specific loan downgrade but rather lending categories which the market perceived to be riskier (e.g. hotels, retail, restaurants, etc). 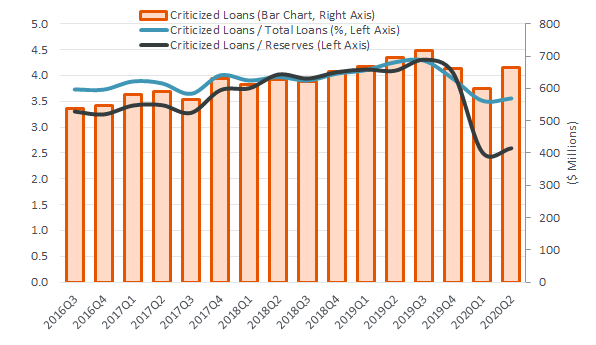 As one can see from the chart above, total criticized loans (orange bars) have held steady and remained at approximately the same level since the beginning of 2018. More importantly, non-performing loans have decreased for the past two quarters in a row.

While credit is likely to weaken a little across the banking landscape as the massive amount of deferral loans work their way back into the system, I believe FULT is in pretty good shape. Bottom line, I would be surprised if FULT’s credit did materially worse than the average bank through this economic downturn.

Over the past couple quarters FULT’s stock price has experienced a pretty sizable drop in value. While I understand the entire banking landscape is likely to feel come credit pain over the next twelve months, I do feel as though FULT’s current valuation offers a substantially positive risk/reward opportunity to the long side.

When looking at its current valuation (first chart in the article), one can see that the bank has never traded this cheaply. The only other time is was remotely this close on a price to tangible book value per share valuation was 2009, when it briefly dipped to these levels before rebounding sharply.

If the third quarter margin shows sustainability and credit continues to hold up well, I believe FULT will drastically outpace peers over the next few months. If not, the current dividend yield, which is a handsome 5%+, looks to be fully covered with future earnings.

Previous PostOutside Of Tech, There Has Been Zero EPS Growth In The Past 12 YearsNext PostHas The Gold Rally Run Out Of Steam?