In France, 31.7% of the working population was affected by the lack of work in the second quarter – a historic average, driven up by the lockdowns. Restoring confidence among nearly 10 million people will not be achieved in the remainder of the year.

The unemployment rate of 7.1% is not a good measure of the situation

French unemployment figures released this week remind us of the precarious situation of the French labour market.

According to the International Labour Office, unemployment takes into account persons “aged 15 or over who meet the following three criteria: are unemployed for a given week; are available for work in the next two weeks, and have been actively looking for work in the last four weeks.”

Lockdown measures due to Covid-19 have made meeting the last two criteria more difficult and many unemployed people who could have potentially benefitted from temporary unemployment schemes were unable to take advantage (especially those who could not go to work at all, without losing their job).

If we add underemployment to this, that is all those who were partially employed and had the willingness to work more, the figures are even higher. Together with the two million unemployed people, there were 2.5 million who could not be available or look for a job in the second quarter (since they had a job but could not work) and 5.3 million who were underemployed.

These 9.9 million people account for 31.7% of the active population in the second quarter, up by 4.3 million on the year. These figures should be considered as an average for the quarter, which explains why there are lower than the peak observed among beneficiaries of the temporary unemployment scheme (more than 12 million during the second quarter) put in place during the Covid-19 crisis. 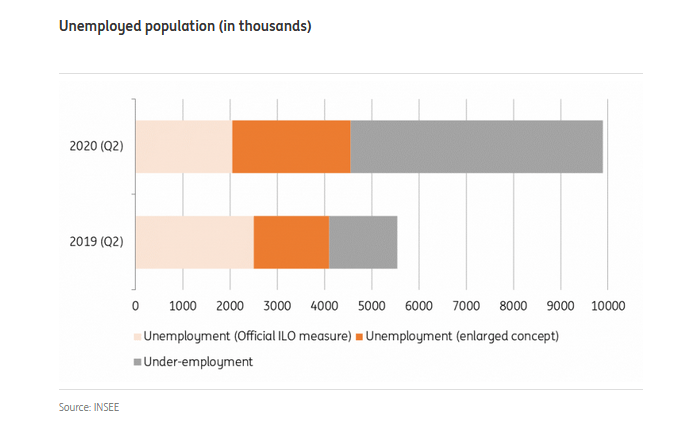 A return to normality will mean higher unemployment rates

While these figures are now a thing of the past, they provide a measure of the hiring efforts.

As lockdowns ease, French companies will have to restore confidence for millions of consumers. This will not happen entirely in the second half of the year and we continue to believe that as the demand shock is digested by companies, more workers will re-enter the unemployment statistic, which we expect to be at 10.5% at the beginning of 2021 (an increase of 3.4pp compared to 2Q20 levels), as corporates proceed to reorganisations.

If unemployment continues to worsen under ILO’s strict definition, it should not mask the fact that the situation will be improving for millions in the months to come.

This publication has been prepared by ING solely for information purposes irrespective of a particular user’s means, financial situation or investment objectives. The information does not constitute investment recommendation, and nor is it investment, legal or tax advice or an offer or solicitation to purchase or sell any financial instrument. Read more.