Please note that since the company is based in Canada and trades on the TSX, any company-related figures, such as FFO, FCF, or dividends, are stated in Canadian dollars. All commodity prices such as oil and natural gas are quoted in U.S. dollars unless otherwise indicated.

Recall that I covered Freehold Royalties Ltd. (OTCPK:FRHLF), which trades under the ticker symbol FRU on the TSX, in May 2020, just as commodity prices were in the initial phases of their recovery. I posited that royalty trusts are an ideal way to play the initial phase of the commodity price recovery with little to no operating costs, and there would be tremendous upside potential with this stock, as it traded at only 8x FFO at $20/bbl oil prices and could still pay the dividend. I figured there was potential over 71% returns if oil prices could reach $50/bbl. Since the time of writing, the price has risen 39%, while oil has been fairly stagnant at ~$40/bbl.

Although management cut the dividend in May 2020 to preserve liquidity from $0.0525/share to $0.015/share, investors got some good news following the release of 2020 Q3 earnings, as FRU’s board approved a 33% increase to the monthly dividend to $0.02 per share (annualized $0.24 per share), where the first increased dividend is expected to be paid on January 15, 2021 to shareholders of record on December 31, 2020. This implies a respectable 5% forward yield. The dividend increase was approved in light of the decreasing volatility in commodity prices.

Although royalty production was flat QoQ from Q2 2020 and down nearly 13% from Q3 2019, operating netbacks improved on a QoQ basis by 70% as the average realized prices on oil and gas increased dramatically. We note that FRU does not utilize hedges, so is entirely exposed to commodity prices. Instead, the company employs very modest leverage (historically less than 1x Net debt/FFO). The result was that its payout ratio fell QoQ from 92% to 27%, which is well below the target 60-80% payout ratio.

Despite the fact that the company operates in one of the most unstable industries, it is, in fact, one of the most recession resilient companies with cost $/BOE historically at less than $5 CAD/BOE, and posted the lowest quarterly cash costs per BOE in its history at $3.70 CAD/BOE in Q3 2020. Aside from negative commodity prices earlier in the year, how many times in history have oil prices traded below $4 CAD/bbl?

This indicates that this business model can be profitable in any environment and is arguably one of the most profitable operations. If you look below, FRU’s free cash flow margin is higher than some of Canada’s largest companies by market capitalization.

As a royalty business, FRU doesn’t have to replace reserves like its operators such as Crescent Point Energy (CPG) or Vermilion Energy Ltd. (VET), which enables very little capital to be held on the balance sheet, so the earnings and cash flow are almost entirely available to the company without having to service debt. FRU only has two choices to make for how to deploy its excess free cash flow, buy back stock or pay a dividend. If the oil and gas prices were to rise, all of those price increases go straight to the bottom line. Meaning that the company doesn’t have to take the cash flow and keep reinvesting in more leases, which become more expensive as commodity prices increase, which is the standard cyclical challenge for oil companies.

In 2015-2016, when oil prices witnessed a precipitous drop and when many of FRU’s E&P customers made drastic cuts to their CAPEX and divested of assets at nosebleed prices, the company went on one of its largest acquisition sprees in its history. In fact, in 2015, FRU spent more in acquiring land in 2015 than it had the previous five years, as shown below.

We summarize the acquisitions below:

Although the dividend was cut in 2015 as a result of reduced drilling activity, the company has been able to return over $2.50/share in dividends to shareholders since that time at an average yield of 6-7%, which has been sustained amid tremendous oil price volatility over the past few years due to having a 60-80% payout ratio and little to no leverage. 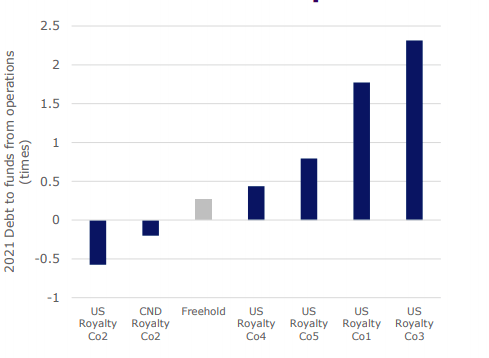 Out of the above-mentioned acquisitions, the Penn West acquisition has the most potential to be accretive. FRU may have perhaps overpaid, as the purchase was made under slightly aggressive assumptions (US$60 per barrel WTI oil price, $3.00 CAD per Mcf AECO natural gas price, and CAD/USD exchange rate of $0.80). Oil prices have only reached $60/bbl for brief periods, since the purchase and natural gas has taken longer than expected to recover, although the futures market is pricing in higher levels in the upcoming years.

According to Beating The Index, the Viking is a low-risk light oil resource play with a large amount of original oil in place that is second only to the Cardium and has one of the lowest recoveries estimated at ~4%. The formation covers a large part of western Canada and extends over most of Saskatchewan and is largely comprised of natural gas, with oil production restricted to west-central Saskatchewan (Kindersley-Dodsland). The formation consists of two marine shales and is divided into two zones. The upper zone is 2-3 meters in thickness and the lower zone is 3-9 meters thick, which has historically been uneconomical to produce. According to government estimates, the upper zone held 2 billion barrels of OOIP exploitable via vertical drilling; however, horizontal development and multistage fracking completion have unlocked massive oil reserves and is expected to increase recovery rates up to 12%, potentially even exceeding 20%. The industry now estimates an additional 6 billion barrels of OOIP as a result of the advent of these new technologies.

READ ALSO  Goldman Sounds The Alarm On Stocks: When Euphoria Is This High, "It's A Good Time To Reduce Risk" 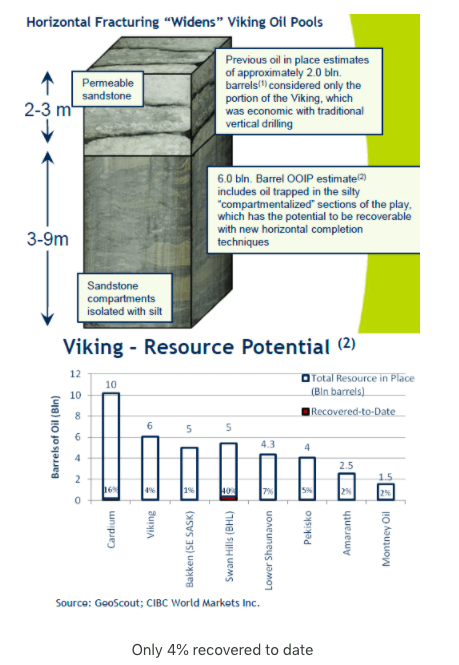 The Viking region is shallower at only 700-750m in depth compared to other unconventional plays such as the Cardium, which results in lower costs for drilling and completing a well, and lower pressure, which translates into less-prolific production rates relative to other light oil plays. Several players in the industry have even started to successfully employ 16 well/section spacing in the Dodsland area, which materially augments the scope of their opportunity base and have brought their costs below $1 million CAD per well, improving returns on the play and well results. It now takes a Viking well less than 28 days from spud date to on-stream date. Saskatchewan offers an extremely attractive royalty system whereby Viking horizontal wells qualify for a 2.5% royalty rate on crown lands and 0% production tax on FRU lands for the first 37,700 barrels of cumulative oil production.

The Viking has been FRU’s most active area with between 80-100 gross wells drilled each year between 2017-2020, as the 8.5% Gross Overriding Royalty (GORR) initially had a 5-year development plan and an expected 100 wells per year. The play has attractive industry economics, as activity levels are supported at low oil prices of even $40/bbl with more than 10 years of future inventory.

FRU has royalty interests in more than 11,000 producing wells and receives royalty income from approximately 300 industry operators. Royalty rates vary from less than 1.0% (for some gross overriding royalties) to 22.5% (for some lessor royalties). The top five operators occupy 45% of gross wells (69% of net wells), however.

Latest From the EIA

The latest report from the EIA as of October 2020, which supported continued global demand for oil and natural gas. 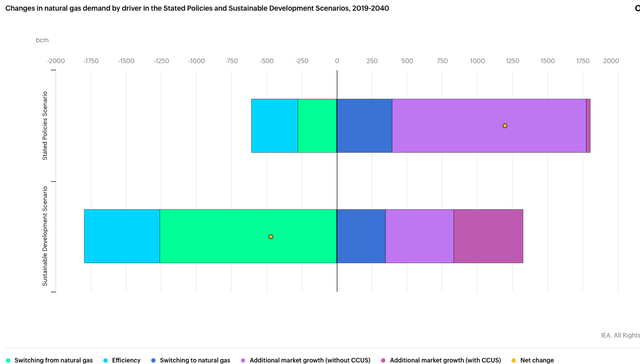 Even $40/bbl would imply a 10x P/FCF multiple, or ~10% free cash flow yield at the current price of $5 CAD/share, which is not as cheap as earlier in the year but is among the cheapest it has traded at in recent years. Paying $5.00/CAD per share right now would look like a steal if oil rises to even $50/bbl in the next year, as that would imply a P/FFO of ~8x.

Please be advised the above chart is based on TTM FCF.

If that doesn’t seem like a good enough deal, don’t forget that the recent dividend increase from $0.015 to $0.02 per month is only 48% of attainable annual FFO at $40/bbl, and management has typically maintained the dividend at 60-80%. Should commodity price stability be maintained, it would not be unreasonable to assume that investors get at least a $0.025/share monthly dividend ($0.30/share annually), which would work out to a 6% annual yield on a forward-looking basis and would still be very well-covered.

In addition, with 13.9% of proved reserves (1P) being undeveloped as of 2019 YE (47% of which are in the Viking), FRU can offer upside with multi-year organic growth without having to invest any capital.

As per the 2019 Annual Information Form: 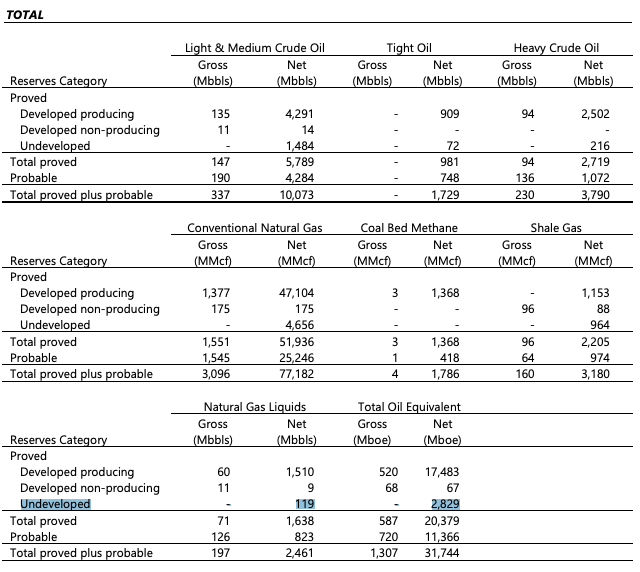 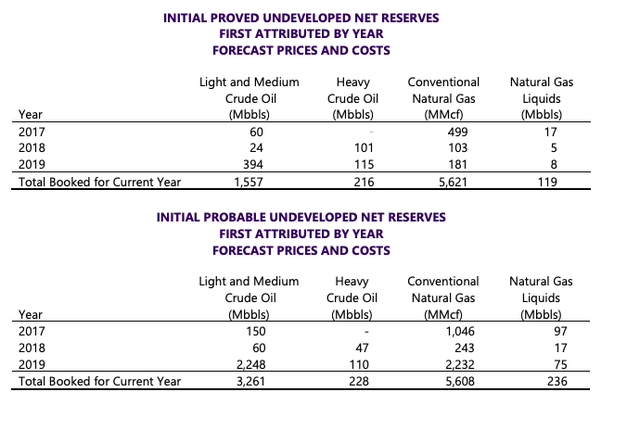 Although a significant portion of the share price appreciation previously expected in May 2020 has been realized, FRU offers the safest ~4.5% yield in the oil and gas sector with a high probability of the dividend being increased further over the next few months. Through a combination of increases in oil prices, dividend increases and multiple expansion, it would not be unreasonable to expect annual returns of at least 10% on FRU over the coming years. For example, free cash flow of $0.50/share at $40/bbl at even a 12x P/FCF multiple (which is modest) would imply 20% capital appreciation from the current price, with a 4.5-6% dividend yield to go along with that.

Disclosure: I am/we are long FRHLF. I wrote this article myself, and it expresses my own opinions. I am not receiving compensation for it (other than from Seeking Alpha). I have no business relationship with any company whose stock is mentioned in this article.