In the recent past, I already covered two German companies, which are both listed in the DAX-30 (including the 30 biggest German companies). Those two companies – Bayer AG (OTCPK:BAYZF) and Fresenius SE (OTCQX:FSNUF) – are also rather well-known outside Germany and have a market capitalization of €52 billion (Bayer) and €19 billion (Fresenius). The company I will cover in this article is Fraport (OTCPK:FPRUF) (OTCPK:FPRUY), which is only listed in the MDAX (including the 60 companies, which did not get included in the DAX) and has a market capitalization of €3.7 billion. 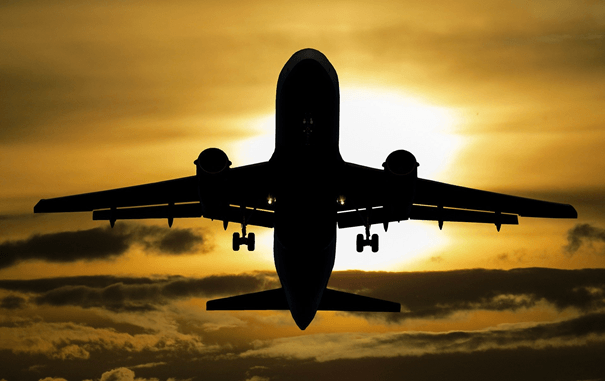 Due to COVID-19, airlines and the travel industry have been hit hard and while the major indices declined steeply (about 40%), the companies operating in the travel industry have been hit much harder. And compared to airlines, Fraport might have a much better business model and could be interesting after declining more than 50% from its former highs. 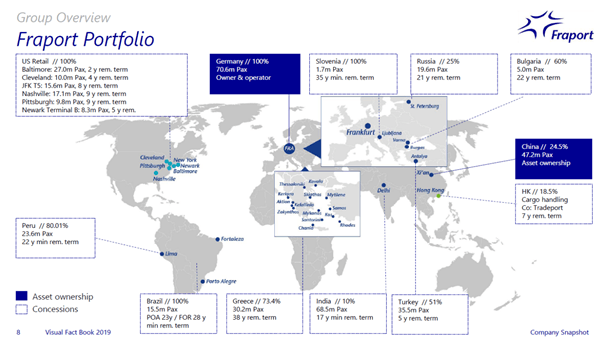 Fraport is reporting in four segments:

In 2019, Fraport generated €3.71 billion in revenue, which is reflecting 6.5% growth YoY (when excluding IFRIC 12, the generated revenue is €3.26 billion reflecting 4.5% YoY growth). Earnings per share declined to €4.55, which is reflecting a decline of 11.2%. Operating cash flow increased 18.7% to €952 million, but due to high capital expenditures, the free cash flow declined to negative €374 million (after six years of positive free cash flow). Germany is responsible for 61.5% of total revenue and this revenue comes almost exclusively from Frankfurt Airport. 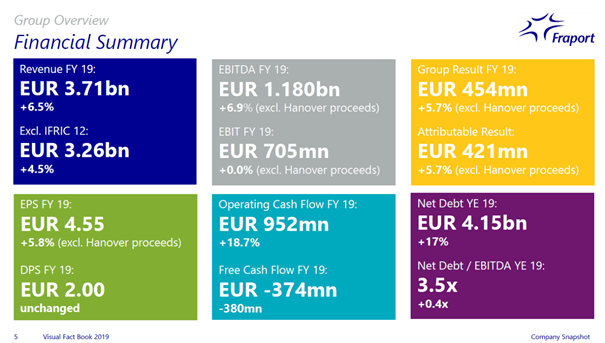 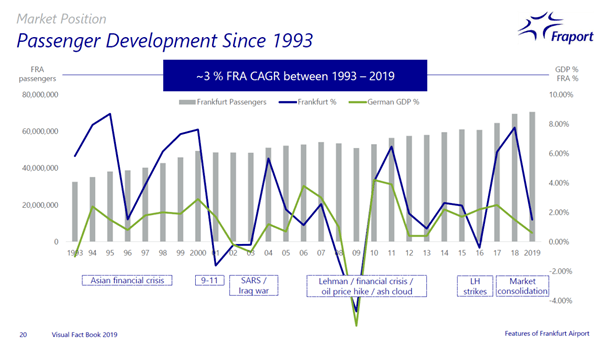 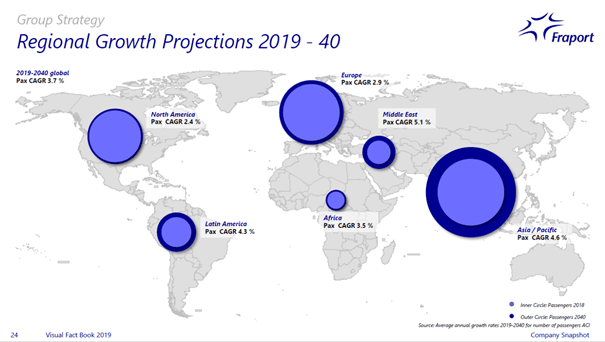 And when not only looking at passenger growth, but at revenue and EPS growth, the reported numbers are much higher. Since 1980, Fraport could grow its revenue about 6.15% annually every single year and net income grew even 9.25%. While revenue growth slowed down a little bit (during the last decade and during the last 20 years, revenue increased 5.2% annually), net income increased with a CAGR of 10.60% in the last decade.

Aside from stable growth in the high single digits, Fraport’s business model can also be described as very stable and with a competitive advantage. First of all, we can look at the shareholder structure of Fraport. The biggest shareholders are the State of Hesse, which is owning 31.31% and the Stadtwerke Frankfurt am Main Holding GmbH, which is owning 20.32%. This means, that Fraport is controlled by these two shareholders and these government entities will lead to stability for Fraport. I don’t really want to compare it to companies that are controlled by the founding family, but I still see it as a good sign for stability and consistency. Lufthansa AG (OTCQX:DLAKF) (OTCQX:DLAKY) also owns about 8.44% of Fraport. 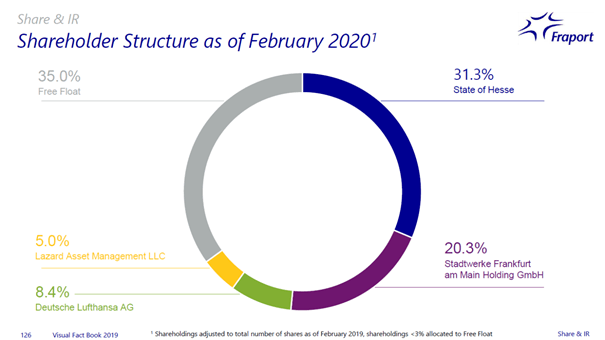 Aside from being controlled by two major shareholders, the company also has an economic moat around its business, giving the company a competitive advantage. Fraport is operating in a niche. A huge part of revenue is stemming from Frankfurt Airport and it is highly unlikely that Frankfurt will get a second airport and the company will therefore be without competition in the foreseeable future. It simply doesn’t make much sense for a city like Frankfurt to have two major airports and this generates a competitive advantage for the company. Of course, there are other ways to travel (which can be a competition) and there are other airports like Munich Airport, but about two-thirds of the German blue-chip companies have the headquarters within a 2-hour radius around Frankfurt airport, which is giving Frankfurt also a competitive advantage. Frankfurt airport will also get bigger in the years to come with the FRA Terminal 3 cornerstone laying in 2019.

When trying to determine a fair, intrinsic value, we can look at simple valuation metrics like price-to-earnings-ratio or price-to-sales ratio. Currently, Fraport is trading with a P/E ratio of 8.18 (using 2019 full-year results) and a price-to-sales ratio of 0.93. For a company that is growing in the mid-to-high-single digits, these valuation metrics seem extremely cheap and obviously make Fraport a great investment.

If you read past articles of mine, you might be surprised that I am using a P/E ratio instead of a discounted cash flow analysis. This brings us to a problem of Fraport. While cash generated by operations is growing at a more or less steady pace, the free cash flow is fluctuating due to extreme upturns and downturns of capital expenditures. The result is four years during the last decade (2010, 2011, 2012 and 2019) in which Fraport had to report a negative free cash flow. 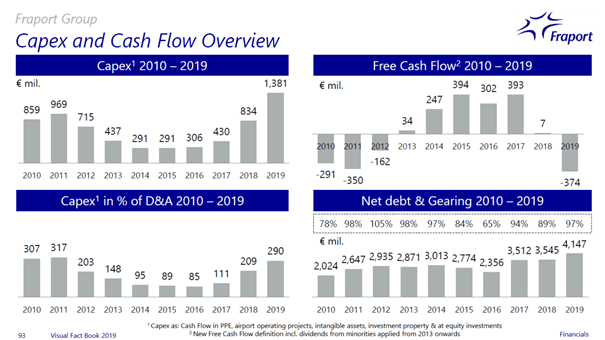 When trying to calculate the intrinsic value of Fraport, we have to assume a similar cyclical nature of the free cash flow during the next decade. In the last ten years, Fraport had an average free cash flow of only €20 million a year. But when making similar assumptions as during the past decade (4 years of negative free cash flow), a similar cyclicality as in the past and growth in the high single digits, I get an intrinsic value around €36 for Fraport, making Fraport fairly valued right now. But I would be very cautious with that number as these assumptions are highly speculative and I find it quite troubling to calculate a solid intrinsic value for Fraport. However, the P/E ratio and P/S ratio tells us that Fraport is cheap right now.

Aside from the high capital expenditures and the fluctuating and often negative free cash flow, Fraport is facing other challenges and I will outline three of them. The most obvious is COVID-19, which is at least a short- and medium-term problem for Fraport. In February 2020, the number of passengers in Frankfurt already declined 4.0% and in Xi’an it declined even 87.6% for the month. And aside from China (in this case Xi’an), the numbers of February don’t show the full impact as it was not before the end of February or beginning of March that most European governments started to restrict travel or put the countries on (full) lockdown. In the last week, the number of passengers declined 73.5%, according to Fraport, and the company also announced it reduced the working hours for 18,000 of its employees (which is about 80% of the total workforce). Carriers already cancelled most of Chinese Operations and Fraport is also seeing similar problems with North Italy and a general weakness of European Air Traffic with business trips, fairs or sporting events cancelled.

The challenging task is to estimate how long this lockdown phase will last and even after the phase of lockdown how long it will take before people will go on vacation again. It could be possible that people will return very quickly to normality again, but it is also a possibility that it might take several quarters or even years before people will travel again like before the pandemic. People might be scared to travel to countries like China, Italy, Spain or the United States and many other countries that have high cases of COVID-19.

As COVID-19 replaced all other major news topics, the “Fridays for Future” movement and the discussions about climate policy that dominated 2019 seem to be forgotten right now. But it is an important goal to reduce air travel in the future, which would have a negative effect on Fraport and another threat to Fraport’s business model. Before COVID-19, it didn’t seem like people abstained from traveling and the number of passengers was still growing in 2019. In the long term, this could be a problem for Fraport.

READ ALSO  The plants costing UK homeowners over £10,000 to remove

And a third and final problematic aspect is the company’s balance sheet. At the end of December 2019, Fraport had €4,747 million in long-term debt (non-current financial liabilities) and €556 million in short-term debt (current financial liabilities) on its balance sheet. With shareholder’s equity being €4,623, the D/E ratio is 1.15, which is rather high, but not extremely problematic. More problematic is the fact that Fraport’s total debt increased compared to one year earlier and especially the time it would take to repay the debt. When comparing the total debt to the company’s operating income (€705 million in 2019), it would take about six and a half years to repay the debt, which is a long time. And I already subtracted the €789 million in cash and cash equivalents on the balance sheet. Especially right now, we should pay close attention to debt levels and avoid companies with extremely high amounts of debt. Especially the rapidly declining revenue in the next months or quarters in combination with the high debt levels should make us cautious and we should look very closely what companies we are selecting as an investment right now. 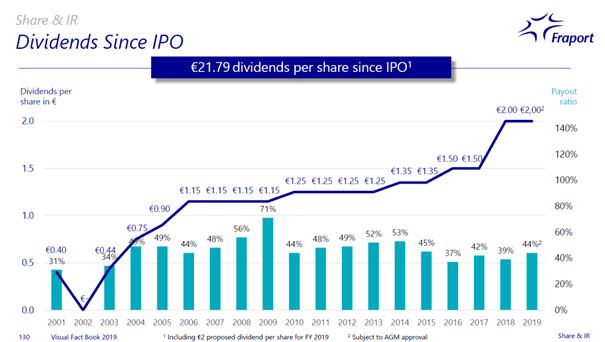 For 2019, Fraport will keep the dividend also stable and proposed an annual dividend of €2.00. In its last earnings presentation, the company also announced that it is trying to keep the dividend stable in 2020 – despite negative impacts of Corona. Currently, Fraport has a payout ratio of 44% and a dividend yield of 5.15% making the stock interesting for every dividend investor.

You are seeing me wavering how to think about Fraport. On the one side, I like the shareholder structure (being controlled by two major shareholders) and I especially like the wide moat around the business, which makes it unlikely that Fraport will face serious competition in the foreseeable future. But I am a little concerned about the company’s balance sheet and the fact that Fraport has trouble to generate consistent positive free cash flow. And even though Fraport might appear cheap right now and has a tempting dividend yield, there seem to be better picks and I will pass on Fraport right now.

If you enjoyed the article and like to learn more about wide moats, please check out my marketplace service: Moats & Long-Term Investing.

Subscribers get access to extensive background information on wide-moats, at least weekly exclusive research, a watchlist of wide moat companies and a chatroom where members can ask questions and exchange opinions about long-term investing and companies with a competitive advantage.

For investing in companies that can beat the market over the long term and create a portfolio with companies you can (almost) hold forever, please check out my marketplace service. You can also take advantage of a free trial offer.

Disclosure: I am/we are long FSNUF. I wrote this article myself, and it expresses my own opinions. I am not receiving compensation for it (other than from Seeking Alpha). I have no business relationship with any company whose stock is mentioned in this article.