Franco-Nevada Corporation (FNV) is the largest publicly traded precious metals royalty streaming company by market cap. It is based out of Toronto, Ontario, and boasts a market cap of USD $27 billion. Franco-Nevada has been a company on everybody’s radar as it has been a star performer during the past few years.

I recently compared the historical performance between the large-cap royalty streaming companies and found that Franco-Nevada outperformed the competition over the longer-term time horizons. However, this isn’t a knock against the other players in this space, as I believe the royalty streaming business model creates excellent opportunities for most companies to be successful. 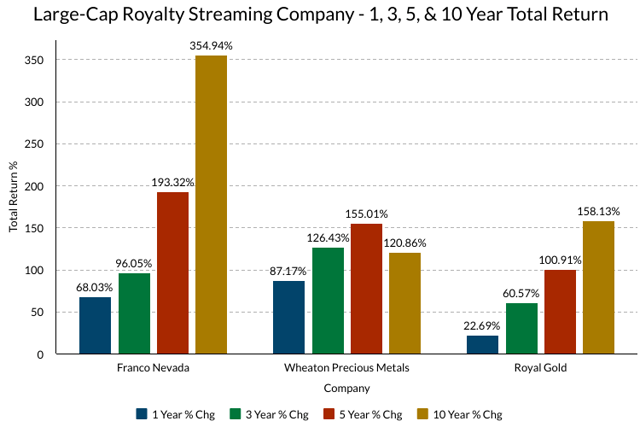 Breakdown of Streaming By Revenue Source

The following is a chart of which products and royalty streams Franco-Nevada derives its revenue from. 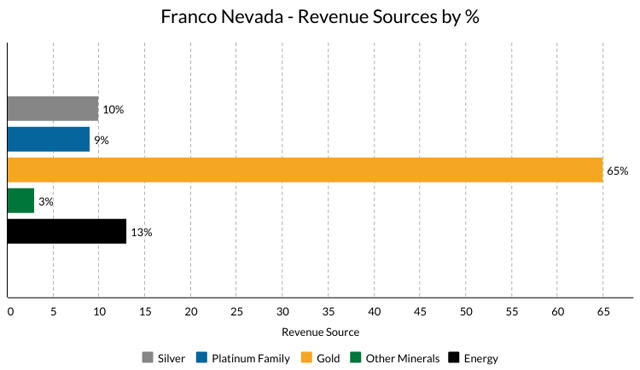 Here is an overview of Franco-Nevada’s percentage revenue by jurisdiction. I had created a similar chart when I wrote about the Top 10 holdings in the GDX and their jurisdictions. 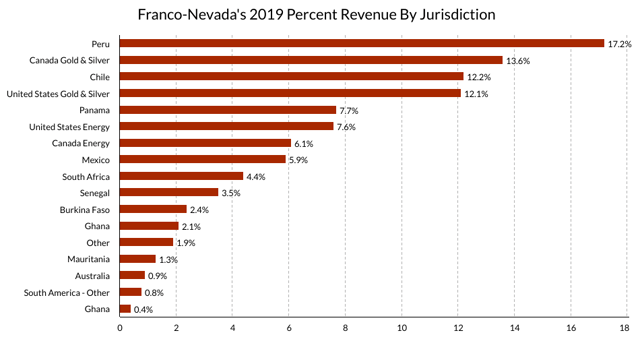 Paul Brink has been the CEO of Franco-Nevada for only a few months at this point. This makes it very difficult to evaluate any kind of historical performance up until now. That said, Paul Brink has been with the company since its IPO in 2007. He has sat under former President & CEO David Harquail’s leadership for Mr. Harquail’s entire time with the company. This can only mean that Mr. Brink and Mr. Harquail have a strong working relationship.

If there was any concern about a change of leadership, shareholders can rest easy knowing that the man who led the company from its IPO in 2007 to the handoff to Paul Brink is still the Chairman of the Board. As was already mentioned, that man is David Harquail.

David Harquail has overseen a decade of tremendous growth at Franco-Nevada. When you look at the total return over ten years (see historical performance chart above), this is clearly evident. I won’t get into the details of Mr. Harquail’s resume since the results speak for themselves, but his career and background are impressive.

I like to study and understand companies with strong, competent leadership. I believe this is one of the x-factors, if not the, that can explain historical returns and helps predict future returns. Some other companies with strong past performance due to leadership at the top might be companies like Equinox Gold (OTC:EQX) Pan American Silver (PAAS), or B2Gold (BTG), not to mention some of the other large-cap royalty streaming companies in this space.

It’s clear to me that Franco-Nevada is highly valued at the moment at 150 times earnings. However, it may be warranted with the revenue growth it is currently seeing. Revenues are going to rise with the price of gold, and so I will provide a sensitivity analysis of Franco-Nevada’s 2020 revenue based on estimated 2020 Gold Equivalent Ounces (GEOs) production.

Just as an aside, energy royalty stream revenue for 2020 was projected to take a significant hit, down 25 to 35 percent.

However, as of Franco-Nevada’s Q1 2020 report, the company has withdrawn guidance. However, for purposes of this analysis, we will rely on the lower range of guidance provided by the year-end 2019 financial report. Based on its GEOs production of 134,931 in Q1, I believe the lower end of the range (550 thousand GEOs) is well within reach. 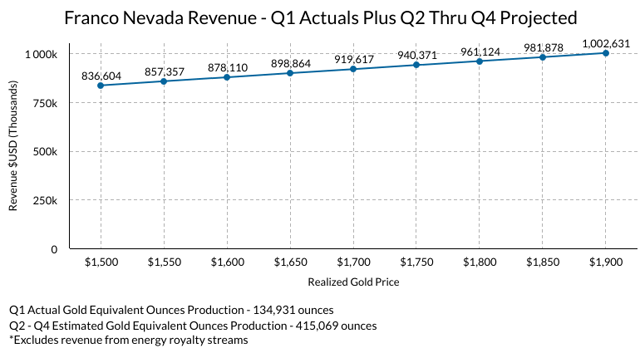 Source: Created by the author using the author’s price sensitivities and data from FY 2019 and Q1 Franco-Nevada financials

Franco-Nevada’s Leverage To The Gold Price

Here’s a look at the realized gold prices that Franco-Nevada has achieved during the past couple of years. 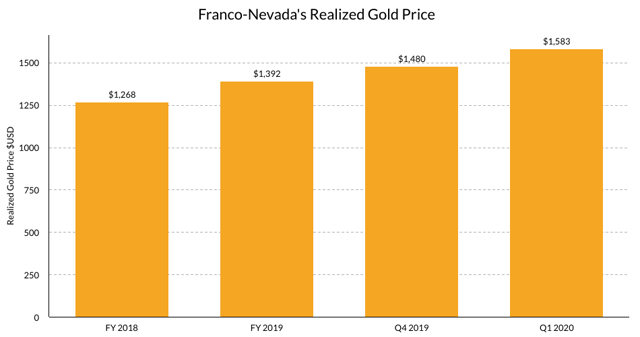 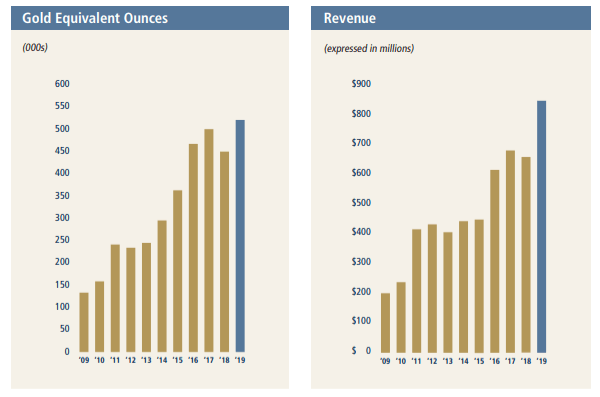 This chart below demonstrates where gold equivalent ounces were added in 2019, which was primarily from gold. 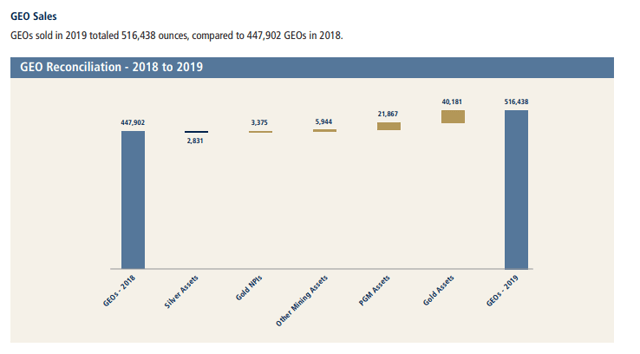 Below is a list of development opportunities. In one of my future writings on Franco-Nevada, I will take a more in-depth look into the revenue opportunities that these new deals will create as well as the potential timing of their cash flows.

The opportunities above only include new agreements that were inked in 2019 and 2020 so far. They don’t include the positive developments that have occurred on Franco-Nevada’s previously existing royalty streams. I won’t go into detail in this article, but you can find many of these developments on page 5 of the quarterly financial report.

It’s also important to understand that there are a lot of adverse developments at individual royalty streaming sites due to COVID-19. However, most of these were likely resolved in Q2, and some could be ongoing. Nevertheless, the higher precious metal prices will likely lead to continued positive developments, which will lead to higher production, and ultimately a virtuous cycle of revenue growth for Franco-Nevada.

In all honesty, when I first began writing this article, I thought that by the end of my research, I would have made the argument that Franco-Nevada was possibly overvalued. And admittedly, I didn’t do a deep dive into the numbers in this article. Since this is the initial article that I’ve written about Franco-Nevada, I prefer to understand it from a higher level at first.

Just from looking at it from a high level, I would be hard-pressed to make the case against being a shareholder in Franco-Nevada. Average gold prices are rising, Franco-Nevada production is expected to rise, and the development pipeline is growing. This all translates to record-breaking revenue in 2020 and likely by a substantial margin. I would say sit on the sidelines at your own risk. However, like any other gold producing company, the risk and reward in the short term are tied to the gold price. In the longer term, the gold price is a factor, but royalty streaming businesses can likely outperform over time in various gold price environments due to the business model.

If you think Franco-Nevada is trading a little too richly, then you may find more opportunities in some of the small-cap royalty streaming companies.

Or you could also look for more value in some of the junior mining stocks that haven’t run up in price as aggressively as some of the royalty streaming companies have.

As far as Franco-Nevada, I’m not currently a shareholder, but may be looking to take a small long position on pullbacks. Technically speaking, gold prices have approached a critical juncture and so I’m still very long on gold, but also cautious.