Founder of Vista Equity Partners under US tax investigation

Robert Smith, the private equity investor who captured headlines with his promise to pay off the student loans of last year’s graduating class of Morehouse College, is the target of a US probe into his tax affairs.

Vista Equity Partners, the group that Mr Smith set up in 2000, wrote to investors about the investigation on Friday, after Bloomberg reported that federal investigators were examining whether Mr Smith had paid US taxes due on assets worth millions of dollars.

Mr Smith has not been accused of any wrongdoing, and the authorities may conclude that he has paid all the taxes he owed. Vista, which declined to comment on a client letter, told investors it hoped its founder would reach a resolution with the US Department of Justice soon.

A chemical engineer by training, Mr Smith has overtaken Oprah Winfrey to become the country’s richest African-American, according to Forbes.

Over two decades he has taken private equity investment into new territory, adapting the techniques of leveraged buyouts to technology companies that often have healthy cash flows but few tangible assets — amassing a $5bn fortune in the process.

He founded Vista with a $1bn investment from a charitable trust connected to entrepreneur Robert Brockman, an executive he met as a banker at Goldman Sachs, who is now chairman of enterprise software company Reynolds and Reynolds.

A judgment issued in March by the Supreme Court of Bermuda refers to “a tax and money laundering investigation” by the DoJ and the Internal Revenue Service, which is related to a charitable trust named for Mr Brockman’s father.

“The investigations related to the tax affairs of Mr Brockman and the suspected evasion by Mr Brockman of tax in relation to more than $2bn of unreported gains made by entities within the . . . trust structure,” the judgment states.

Reynolds and Reynolds did not immediately respond to a request for comment. 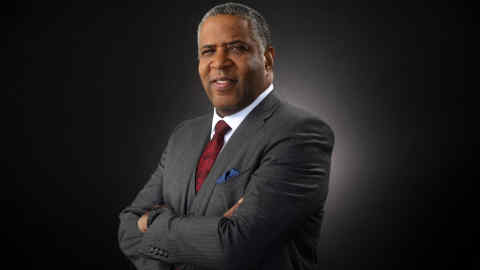 Delivering a valedictory address last year at Atlanta’s historically black Morehouse College, Mr Smith exhorted risk-taking and hard work, and invoked an optimistic vision of a high-tech economy in which the key to success was intellectual capital rather than inherited wealth.

He then announced his family was donating an estimated $40m grant to pay off the entire student debts of the graduating class — an act that drew praise from political figures including Barack Obama and Ivanka Trump.

Vista’s letter to investors, which was described to the Financial Times by a person who has seen it, said that the group had disclosed the review of Mr Smith’s tax returns in investor materials as long ago as 2016.

Neither Vista nor its funds and portfolio companies were targets of the review, the letter said.