A former top Saudi intelligence official has claimed in a lawsuit that Crown Prince Mohammed bin Salman dispatched a hit squad to kill him in Canada two years ago.

The Saudi agents targeting Saad Aljabri were members of a “Tiger squad” that is close to Prince Mohammed, the kingdom’s de facto leader, and tried to enter Canada as tourists, the lawsuit, filed in the US on Thursday, said.

It said Canadian authorities foiled the October 2018 plot against Mr Aljabri, who has been living in self-imposed exile for three years, after the alleged agents “aroused the suspicion of Canadian border security officials”.

Mr Aljabri, who is credited with playing a pivotal role in the kingdom’s fight against al-Qaeda and built strong ties to western intelligence agencies, is suing for damages. The lawsuit provides little hard evidence to back the claims of the assassination plot. It cites “threatening” WhatsApp messages it claims Prince Mohammed sent to Mr Aljabri in 2017 ordering him to return to the kingdom, and saying he would “use all available means” and “take measures that would be harmful to you”.

The legal case is the latest twist in a bitter dispute between the senior official who was at the centre of the Saudi security system and the young crown prince has pledged to modernise the kingdom but also faced widespread criticism for his autocratic rule and human rights abuses. Prince Mohammed and Saudis close to the crown prince are among the defendants named in the filing.

Saudi Arabia did not respond to a request for comment. 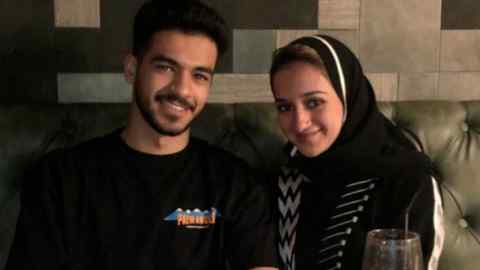 Bill Blair, Canada’s public safety minister, told the Financial Times in a statement: “While we cannot comment on specific allegations currently before the courts, we are aware of incidents in which foreign actors have attempted to monitor, intimidate or threaten Canadians and those living in Canada.

“It is completely unacceptable and we will never tolerate foreign actors threatening Canada’s national security or the safety of our citizens and residents.”

The lawsuit itself claims Mr Aljabri is “uniquely positioned to existentially threaten” Prince Mohammed’s standing with the US government and “was privy to sensitive information” about the crown prince’s “covert political scheming within the royal court and “corrupt business dealings”.

It claims that Prince Mohammed believes that Mr Aljabri was responsible for the CIA’s reported conclusion that the crown prince, as de facto ruler, must have authorised the operation that led to the murder of Khashoggi.

The Aljabri family has previously alleged that two of his children and other relatives have been detained in Saudi Arabia since March in an attempt by Prince Mohammed to pressure Mr Aljabri to return to the kingdom. The former intelligence official went into exile after Prince Mohammed bin Nayef, his former boss at the interior ministry and close confidant, was replaced by Prince Mohammed as crown prince in June 2017 and reportedly confined to his palace.

The Wall Street Journal reported last month that the Saudi government alleges that Mr Aljabri led a team that misspent $11bn while he was at the interior ministry. But Riyadh has made no public statements about the case.

Khalid Aljabri, a son of the former security official who is also in Canada, has dismissed any suggestions that his father could be wanted in connection with corruption or other issues. He told the FT in June that the detention of his siblings, Sarah, 20, and Omar, 22, was “politically motivated” and said his family was being targeted because of his father’s former close relationship with Prince Mohammed bin Nayef, who was seen as a potential rival to the crown prince.

Saudi Arabia became embroiled in an extraordinary diplomatic dispute with Canada in August 2018 after Chrystia Freeland, then Canada’s foreign minister, called for the release of a prominent Saudi women’s rights activist who has family in Canada. Riyadh responded furiously, expelling the Canadian ambassador, freezing new trade and investment with the G7 member, suspending a student exchange programme and halting flights by state-owned Saudi Arabian Airlines to Canada.

The kingdom has been desperate to improve Prince Mohammed’s image since Khashoggi’s murder and this year it is the chair of the G20 group of nations and due to host of summit of its leaders in November.