A former EU diplomat who was alleged to have spied for China has accused the German authorities of “sloppiness, stupidity and ignorance” and says he will demand millions of euros in compensation from the German state for “ruining his life”.

German prosecutors dropped their investigation into Gerhard Sabathil last month after failing to adequately substantiate allegations that he worked for the Chinese intelligence services.

In an interview with the Financial Times, the former EU envoy to South Korea said investigators had “just made stuff up, manipulated facts and constructed a story out of half-truths and misunderstandings”.

He said he would demand a “small seven-figure sum” from the German state. “I’ve been deprived of four years’ salary,” he said. “I’ve been really burnt, and I don’t know if I can work again. My reputation, network, my circle of friends, it’s all been destroyed.”

A flamboyant figure with a penchant for colourful bow-ties, Mr Sabathil served as the EU’s ambassador to Seoul, Oslo and Berlin and as the EU diplomatic service’s director for East Asia and the Pacific. In 2017 he quit to join a lobby firm, EUTOP.

You remember when Kaiser Wilhelm talked of the yellow peril? Envy has led to fear

In January this year, German prosecutors launched searches of his office and home, accusing him of operating as an “informant and recruiter” for Chinese foreign intelligence. They alleged he agreed to pass on information to a Chinese spy called “Johnny” who worked for the Shanghai Institute for European Studies (SIEC), a think-tank. Investigators believe the institute, where Mr Sabathil delivered a lecture on German politics in 2017, has links to Chinese intelligence.

The affair has highlighted the deepening tensions in the relationship between China and the west, exacerbated by the US-China trade war, friction over Hong Kong and Xinjiang and the crackdown on telecoms equipment supplier Huawei. European governments are becoming increasingly concerned about alleged Chinese influence operations and worry present espionage laws are ill-suited to tackling the problem.

Meanwhile, as the tensions proliferate, people with Chinese connections complain of being treated with undue suspicion by western authorities.

Mr Sabathil said the case against him was “a product of the new fear of China”. “Anyone who doesn’t want to surf this wave [and] join the fight is immediately suspect,” he said. “You remember when Kaiser Wilhelm talked of the yellow peril? Envy has led to fear.”

The case has coincided with mounting alarm in Berlin over a perceived uptick in Chinese espionage activities in Germany. In its latest annual report, the Verfassungsschutz, Germany’s domestic intelligence agency, said China was increasingly trying to enlist Germans “with high-grade access” as spies, luring them with the “prospect of attractive remuneration”.

It also warned of Chinese think-tanks, saying some were being used by the country’s spy agencies to establish contact with students, diplomats and businessmen who they then try to recruit as agents. Such institutions “serve to gather sensitive information . . . pick out appropriate targets and provide cover for espionage activities”, it said. 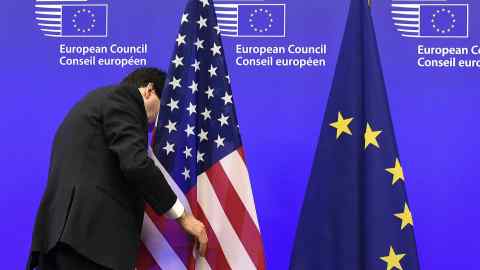 But the investigation into Mr Sabathil went nowhere. According to documents seen by the FT, prosecutors themselves expressed doubts about the validity of some of the evidence. In particular, they pointed to “significant deviations” between the transcripts of phone calls tapped by the Verfassungsschutz and the actual tapes of the calls, saying material that might have exonerated Mr Sabathil had been omitted.

However, a person close to the investigation insisted that the full audio files were made available to prosecutors. The person also said the suspicions against Mr Sabathil have not been completely dispelled. However, these were insufficient to lead to a conviction in the case.

Officially, the probe was terminated because it did not confirm the alleged espionage activities “with the certainty required for an indictment”, a spokesman for the Federal Prosecutor’s Office said. He declined further comment.

Mr Sabathil came to the authorities’ attention in 2015 after he passed an EU document classified as confidential to his partner, a Chinese academic — a move he has admitted was a “mistake”. After that, Germany withdrew his security clearance and in 2016 he was summoned back to Brussels from South Korea, where he had been serving as EU envoy. Soon afterwards he left the diplomatic service.

But he has denied the allegation that he spied for the Chinese as “absolute nonsense”. Of the investigators, he said: “These are people who have watched too many crime thrillers, had nightmares and fantasies, and then made stuff up.” A spokesperson for the Verfassungsschutz declined to comment.