We penned an article on Ford (F) back on the 10th of June and stated that the automobile manufacturer could easily revisit its March lows. Due to the aggressive move off those March lows, bullish sentiment was increasing despite the suspension of the dividend. We pointed out however that although shares looked cheap at the time, Ford’s valuation in recent times had consistently underperformed the industry averages. Suffice it to say, there was no guarantee that this time would be any different.

Fast forward three weeks-plus to the present day and Ford shares are more or less trading around the same level ($6.05 per share). In the most recent second quarter, management announced that overall sales fell by approximately 33%. Retail sales however helped matters as this segment only lost 14.3% over the same period of 12 months prior. Another encouraging trend is that Ford’s truck division (by far its biggest segment) dropped the least (26.6%) out of the three divisions with the overall sales number for Q2 coming in at 237,891 units.

Bulls will be hoping the new 2021 F-150 will drive buyers back into this market. If the arrival of America’s best-selling truck coincides with the coronavirus vaccine, we may finally see strong pent-up demand coming to the surface.

Between now and then though, risk definitely persists to the downside. For one, the S&P 500 has been practically on a straight-line rally since its lows in March of this year. When this rally finally comes to a halt, we will most likely see our intermediate cycle decline. For example, if we were to say that the present intermediate cycle in the spiders has already topped (at 3232 on the 8th of June last), a 50% retracement from this level (which would be perfectly normal) would retrace the index back to around the 2700 level. A more modest 38% retracement would bring price back to the 2835 level.

Therefore, what Ford investors need to ask themselves is how their shares will perform when the main indices begin their intermediate declines in earnest.

We actually ran a scan where we looked for stocks with greater market caps than $1 billion, option volume over 100,000, book value under 1 and IV percentile over 50. Ford came out on top of the list.

This may be where the opportunity lies in Ford at present. Since its implied volatility is more than 60% at present, its 52-week IV percentile comes in at around 75%. Considering shares are trading with a book multiple of 0.8 at present and the options market is very liquid, we may be able to use some derivative strategies here in order to gain an edge.

If we look at the daily chart for example, we can see that shares now have strong short-term support between the $5.50 level and the $5 level. Shares spent well over two months trading in this range. Furthermore, price has now formed a daily swing and has broken above the down-cycle trend-line. This may mean we get some reprieve from the recent downturn. If indeed, this turns out to be the case, this may bring opportunity for option premium sellers. 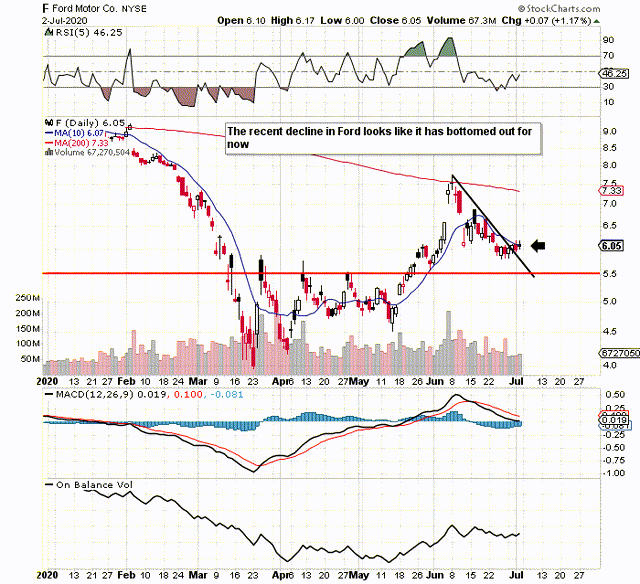 The activeness of trading Ford for us is its liquidity. For example, since we do not want to hold of the shares in here, we could sell something like a put spread where our risk is defined. In fact, because the bid/ask spreads are so tight in this stock, trading put spreads in Ford gives us the opportunity to roll spreads out in time (which is something we rarely do due to extra commissions and lack of liquidity). In Ford´s September cycle for example, we have strike prices available every $0.50 which again brings more possibilities to the table for option traders. The September cycle at present is trading with implied volatility of over 58%. Ford´s 52-week implied volatility low comes in at just 16.4%.

Therefore, to sum up, from an encouraging standpoint, shares of Ford have been building support for multiple months now. In saying this, its implied volatility levels have remained above normal. We are looking at put spreads below support levels to take advantage of this volatility. We will put on this trade shortly.