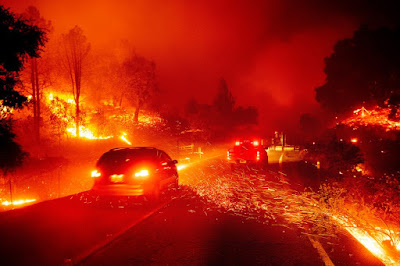 Forbes contributor Michael Shellenberger has done an excellent job of taking apart the shallow claims of socialist congresswoman Alexandria Ocasio-Cortez and others that the California fires have been caused by climate change.

Many blame climate change [for the California wildfires].“The reason these wildfires have worsened is because of climate change,” said Leonardo DiCaprio.“This is what climate change looks like,” said Rep. Alexandria Ocasio-Cortez.

—
I asked Dr. Jon Keeley, a US Geological Survey scientist who has researched the topic for 40 years, if he thought the 2018 Paradise fire could be attributed to climate change.

“It’s almost certainly not climate change,” he said. “We’ve looked at the history of climate and fire throughout the whole state, and through much of the state, particularly the western half of the state, we don’t see any relationship between past climates and the amount of area burned in any given year.”

—
The only solution to fires in the shrubland is to prevent them and/or harden homes and buildings to them.

Before Europeans arrived, fires burned up woody biomass in forests every 10 to 20 years, preventing the accumulation of (wood) fuel, and burned in the shrublands every 50 to 120 years.

But for the last 100 years, the US Forest Service (USFS) and other agencies put out most fires, resulting in the accumulation of wood fuel. “It’s like the forests have become a really tall version of chaparral,” said [Hugh Safford, a forest ecologist with the US Forest Service].

The result can be fires that burn so hot they sometimes kill the forest, turning it into shrubland.

“I did a paper that found if you looked at Sierra Nevadas you’d want a half-million acres a year burned,” said US Forest Service research ecologist, Malcolm North. But, “over a 10-year period, the Forest Service was treating 28,000 acres and burning 7,000 acres, and so we’re at just seven to eight percent of where you would want to be.”

—
Keeley published a paper last year that found that all ignition sources of fires had declined except for powerlines.

“Since the year 2000 there’ve been a half-million acres burned due to powerline-ignited fires, which is five times more than we saw in the previous 20 years,” he said.

“Some people would say, ‘Well, that’s associated with climate change.’ But there’s no relationship between climate and these big fire events.”

What then is driving the increase in fires?

“If you recognize that 100% of these [shrubland] fires are started by people, and you add 6 million people [since 2000], that’s a good explanation for why we’re getting more and more of these fires,” said Keeley.

—
I asked Keeley what he thought of the Twitter spat between Gov. Newsom and President Trump.

“I don’t think the president is wrong about the need to better manage,” said Keeley. “I don’t know if you want to call it ‘mismanaged’ but they’ve been managed in a way that has allowed the fire problem to get worse.”

What’s true of California fires appears true for fires in the rest of the US.

In 2017, Keeley and a team of scientists modeled 37 different regions across the US and found “humans may not only influence fire regimes but their presence can actually override, or swamp out, the effects of climate.”

Of the 10 variables, the scientists explored, “none were as significantly significant… as the anthropogenic variables.”

I asked Keeley if the media’s focus on climate change frustrated him.

“Oh, yes, very much,” he said, laughing. “Climate captures attention. I can even see it in the scientific literature. Some of our most high-profile journals will publish papers that I think are marginal. But because they find climate to be an important driver of some change, they give preference to them. It captures attention.”

Previous PostOPEC and its allies consider production cuts as the Aramco IPO complicates its December meetingNext PostGermany: health apps to be available on prescription