Calumet Specialty Products (CLMT) hedged its fuels future for the entire year of 2020. With 2020 drawing to a close and these fuels and other hedges set to expire with the December 2020 quarter, it is a good time to explore how the company is likely to perform going forward. We begin by reviewing the company’s recent financial health before exploring 2021. We’ll finish with a look at next year’s numbers based on improving markets.

Although the headline EBITDA may seem disappointing to some, the company still generated $70 million in cash from operations with a significant portion falling to the bottom line. With Calumet’s continued effort to deleverage, this cash generation amount speaks loudly to its ability to remain viable even during these most difficult times. Non-cash write-offs, especially from RINs, are what drove the disappointment in EBITDA. But because it’s all about the cash, let’s dive into last quarter cash performance and offer estimates for the balance of the year.

In our last Seeking Alpha article, we cited a note in which “we surmised that $50 million would come from Specialty and up to $20 million from fuels.” The totals based on our calculation methods were spot on. The company reported overall adjusted EBITDA of $41 million of which $56 million was from Specialty, $2 million from fuels, and corporate overhead costs of $17 million. The fuels results had a non-cash negative charge of $23 million from RINs so the fuels cash generated was actually $25 million. Assigning fuels $7 million of corporate overhead nets to $18 million cash generated in fuels versus the $20 million estimate. The estimate for Specialty was $50 million, and here too we were very close when you take the actual Specialty EBITDA of $56 million and subtract the balance of the corporate overhead of $10 million, leaving $46 million versus our $50 million estimate. We believe in a post GF environment that for Shreveport to support overhead costs requires GC 2-1-1 crack spread of $15 or so. Our own daily calculation for GC 2-1-1 crack for the June quarter averaged $10. With the Shreveport refinery operating at 35,000 barrels per day, each $1 of crack spread affects its EBITDA by $2 million.

Fuels performance is currently about derivatives. Calumet wisely hedged the WCS spread with crude oil basis swap contracts with approximately 4,000 barrels per day diesel and a modest sized hedge on gasoline. The hedge data from the company’s 10-Q for each are copied below.

At June 30, 2020, the company had the following derivatives related to WCS crude oil basis purchases in its fuel products segment, none of which are designated as hedges:

Note: The amount hedged since the second quarter represented approximately two-thirds of the feed to the Great Falls refinery. WCS/WTI spreads averaged $7 in the June quarter versus $11 quarter to date in the September quarter. That $4-5 per barrel increase for a 1/3 of the Great Falls facility adds $3 million of fuels EBITDA. (The calculation equals 28K per day feed times 90 days in the quarter times 70% efficiency times 33% of the unhedged throughput times $4.)

Note: Our GC 2-1-1 averages for both the June and September quarter-to-date are thus far the same.

At December 31, 2019, the company had the following derivatives related to diesel crack spread swap sales in its fuel products segment, none of which are designated as hedges:

At December 31, 2019, the company had the following derivatives related to gasoline crack spread swap sales in its fuel products segment, none of which are designated as hedges:

With these hedges in place, it appears that fuels cash generation for the next two quarters by our calculation will be approximately $10 million. Specialty appears to be improving even though the second half of the year’s quarters tend to be more measured. According to the second quarter presentation, Specialty volumes fell in April, troughed in May, and increased during June. Thus far in the quarter, volumes remain higher. With crude oil prices rising, the company increased prices “in early 3Q across multiple Specialty product lines [and] are holding.” We suspect that the continued performance in Specialty will be in the $60 million range. The cash balances for the rest of the year are included in the following table.

Perhaps the biggest surprise on the call centered around a discussion of engineered fuels – a fast growing, high margin product line. Stephen Mawer, Calumet’s CEO, offered this comment: “As the market leader in engineered fuels, true fuels continued its recent record of greater than 25% year-over-year volume growth during the first half of 2020.” He also noted that thus far Calumet’s market penetration is less than 2%. Although our search for the size of the total Specialty EBITDA from engineered fuels turned up empty, we suspect this drove significantly higher financial performance. We included the company’s slide detailing the further depth into this market. 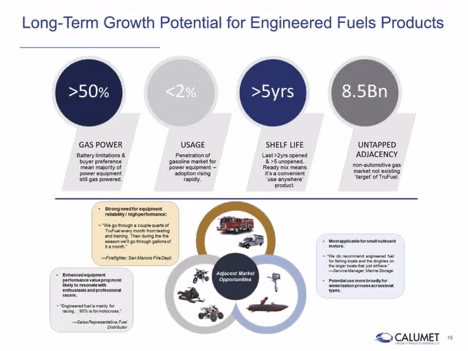 Adding Meaning to the Improving Performance within Fuels

In three months, Calumet’s hedges will expire. Fuels, in particular, could be significantly impacted without these hedges. It is unclear at this time if Calumet will be successful in divesting the Great Falls refinery, but it is likely that a decision on this valuable asset will happen soon. It is therefore important to evaluate fuel’s performance with or without the Great Falls refinery.

Since we have a reasonable means in order to calculate Great Falls’ performance, the Shreveport performance may be calculated by subtracting Great Falls’ EBITDA from the total. Calculating Great Falls requires knowing the WTI/WCS spread and the GC 2-1-1 spread for a quarter. For the second quarter, the WTI/WCS spread equaled $10 and the GC 2-1-1, $10. From our model, Great Falls generated approximately $25 million in EBITDA. Shreveport likely broke even. Note: It seems that with the Shreveport refinery operating at 35,000 barrels per day, each $1 of crack spread affects its EBITDA by about $2 million (35,000 times 90 days times 0.70).

* Sale of Great Falls plus our expected year ending cash of $150 million reduces debt from $1.3 billion to $650 million.

It’s important to note that without Great Falls, Specialty must cover the corporate overheads by itself at spreads near $10. Our experience with crack spread values suggests that long-term spreads greater than the mid-teens are likely. One of the strong influences under the current circumstances is the low utilization for the American refinery. The last EIA report stated that refineries averaged 75% utilization last week compared with 85% last year. Although gasoline and jet fuel inventories recently reached normal levels, inventories for other heavier products such distillate fuels are still 30% above normal. With higher product inventories and low utilization, more normal pricing seems still a ways away.

With Great Falls, the annual financial performance changes. The key difference is the advantage that that refinery offers from the WTI/WCS spread most recently at $10+. This next table illustrates this difference.

** Debt reduction through the repayment of the remaining 2022 bonds.

Even at low crack and WTI/WCS spreads, the financial performance of Calumet with Great Falls remains viable and likely generates the needed income to pay debts when they come due in the next 4 years.

In either case with or without the Great Falls refinery, Calumet continues to show a bright future.

The following chart of Calumet was created using a TradeStation App: 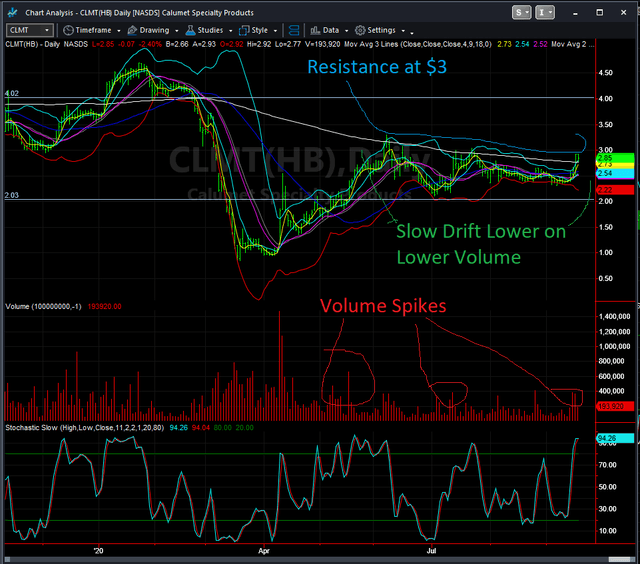 Calumet, on the back of a stronger Specialty performance even during difficult macro events, generated a significant amount of cash in the quarter. It appears to us that the company will continue generating cash for the rest of this year and into the foreseeable future, despite refining headwinds that might still exist. The potential sale of the Great Falls refinery would likely speed their pathway to deleveraging, but we believe that a sale is not necessary as this asset is poised to continue to generate lots of cash into the future. At $2-$3 a unit, the price is still dirt cheap.

Disclosure: I am/we are long CLMT. I wrote this article myself, and it expresses my own opinions. I am not receiving compensation for it (other than from Seeking Alpha). I have no business relationship with any company whose stock is mentioned in this article.