FOMC Minutes And The End Of Repogeddon

Given that monetary policy is the one thing holding the economy together at present of course we’re interested in what the Federal Reserve has to say over what it might do about monetary policy. Their answer, in the latest FOMC notes, being not a lot really. For we have monetary policy that works at present so why change good thing?

Of course, this being central banking that’s not quite exactly how they put it but it is largely what they mean.

…refining the statement could be helpful in increasing the transparency and accountability of monetary policy. Such refinements could also facilitate well-informed decisionmaking by households and businesses, and, as a result, better position the Committee to meet its maximum-employment and price-stability objectives

That is, if we explain what we’re trying to do a bit better then it’ll be easier to achieve our task.

This being true of central banking for a lot of it is about managing expectations. So, if we all know what it is they’re trying to do that will shepherd us into the behaviour they desire. As an example, if we all understand that their target inflation rate is core PCE – which it is and market detail orientated people know this – then we’ll all keep our eye on core PCE. If this starts rising above the 2% target then market interest rates will rise in anticipation of a Fed rate rise. But if market rates rise then a Fed rise is partially already happening – the job is easier.

There’s not a great deal in there that is of any great change to what has been said before.

The minutes from the July 28-29 meeting of the Federal Open Market Committee show the central bank is moving closer to adjusting its forward guidance and also suggest support for yield curve control is still lacking.

We’re not about to see any major change in policy. The balance sheet will continue to expand – as it must do to finance Congressional spending. Maturing CMBS and the like will be rolled over into further positions in the same instruments. 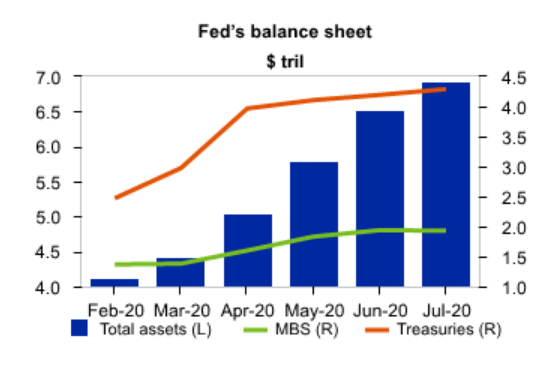 There is however something interesting in there even if it’s not about a policy change.

You may recall people going frantic over “Repogedon” some 9 or 10 months back.

Breitbart and ZeroHedge have been shouting that the financial markets are in chaos, disaster looms, over the spike in repo rates. This isn’t actually a serious problem whatever is being said.

The Fed, back then, told us that this wasn’t quite what people thought. It wasn’t some grand problem in the markets at all. It was, rather, that previous regulatory changes had created a bottleneck in the markets. As Craig Pirrong and others have pointed out a move to central clearing concentrates liquidity and collateral risk. Which is what was happening. Repo rates surged not because of actual problems, but because of that concentration of risk. The solution to this? Just that the Fed makes more liquidity available.

READ ALSO  A Free Press Has A Responsibility To Be Fair

So, fast forward to today:

As term U.S. dollar liquidity swaps matured, the amounts outstanding fell to around $120 billion, less than a third of the peak reached in late May.

In light of improved conditions across these markets, the Federal Reserve’s balance sheet declined over the intermeeting period from $7.2 trillion to $7.0 trillion. The decline was driven by the reductions in repo and U.S. dollar liquidity swaps outstanding.

The liquidity provided worked and the demand for it has fallen substantially.

Sure, this is worrying about a detail of the market but it’s good to know, all the same, that it is what cooler minds said it was all along. This isn’t – that high repo rate – a signal of some deep disfunction it’s a sign of a technical issue with a simple solution. Which is calming, no?

I think it’s fairly obvious that absent a significant irruption of unexpected inflation we’re not going to see a Fed move to raise interest rates. And I’d expect inflation to have to move well over target of 2% before they considered it even then.

We are also not going to see any move to shrink the balance sheet for much the same reason. Plus the fact that Congress is still spending money at such a rate that the monetisation of fiscal policy must continue. So, in fact, we’ll see – as the minutes say – a continual excpansion of that balance sheet.

We don’t even want any tightening unless there’s that inflation and we probably can’t until Congress curbs spending more than a little. So, no likely change in policy in the immediate future.

No change in Fed policy means that there’s no specific position to take to protect against such a change. In terms of monetary policy really the investment stance is determined by what you think inflation is going to be. I think that the monetary expansion is going to, at some point, turn up in inflation but it’s not going to be in the short to medium term. Therefore there’s no positioning for it necessary as yet.

Along with that general view that the markets are correctly priced for a reasonably swift V shaped recovery that pretty much covers macroeconomic guidance to investing. We’re back to the microeconomics of specific companies and situations.