All said, Buffett’s purchase serves as a reminder that there are good values to be had outside the U.S.

Below I review some broader portfolio applications of Buffett’s “Buy Japan” strategy, and why investors may want to follow his lead.

These sogo shosha have prices that average 79% of their book value, with four of the five below 85% of book value. If you believe in the quality of that book value, you’re buying an asset for less than liquidation value that is providing nice current cash flows via dividends and buybacks.

READ ALSO  bluebird bio Should Be On Your Radar With Multiple Catalysts Expected This Year And 2021 (NASDAQ:BLUE)

As of August 31, DXJ had a price-to-cash-flow multiple of 7.8 times, or an approximate 13% cash flow yield-not far from the Buffett basket.

The U.S. market and the S&P 500 Index by contrast has a price-to-cash flow of over 16 times, with a cash flow yield of just 6%, which is 75% below the cash flow levels of Japanese corporates in Buffett’s Japan portfolio.

For definitions of terms in the chart, please visit our glossary.

Stepping back, Japanese equity valuations have been contracting for the last three decades. Following the peak of the Nikkei at nearly 40,000 at the end of 1989, to just over 23,000 more than 30 years later, valuations have continually compressed.

In the early 1990s, Japan traded at over 60 times earnings1, when the S&P 500 was below 20 times earnings. Now, the U.S. market is in vogue with expanding multiples, while Japanese valuations languish.

Japan was trading at similar multiples as the S&P 500 following the great recession in 2009 from 2011-15. But starting five years ago, the S&P 500 de-coupled, led by the large technology stocks that fueled a rise in the S&P 500’s earnings multiple. 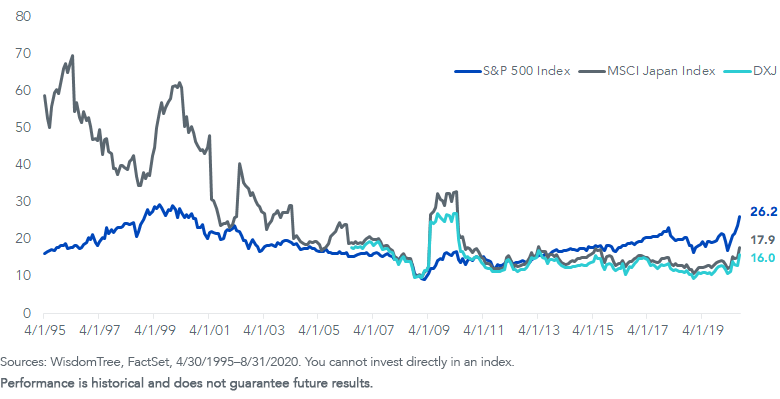 Japan clearly should trade at a lower multiple given different sector compositions and growth profiles. But its exposure is aligned for a re-opening of the global economy given the cyclical nature of corporate Japan. The nation is highly leveraged to global growth, with an emphasis on Industrials and Consumer Cyclical companies. Global fiscal stimulus should support it following the coronavirus pandemic.

While the U.S. markets are generally ‘priced for perfection,’ Japan is trading at its lowest multiples in decades with a potential for positive catalysts – renewed global growth, an under-owned market and now the ultimate value investor stepping in that could restore confidence in Japanese assets.

Buffett engaged in a very interesting yen-denominated bond issuance last year – raising ¥430 billion of yen-denominated bonds (over $4 billion). If the yen declines in value, his debt will decline in U.S. dollar terms, offsetting any losses that come from being inherently long the yen when buying these stocks. This allows Buffett to isolate the true ‘equity opportunity’ without having to navigate a separate currency bet.

We believe investors should consider following this type of approach, too. DXJ incorporates that currency hedge to neutralize movements of the yen and help investors focus on the potential gains of Japanese stocks.

Unless otherwise stated, data sources are WisdomTree and FactSet, as of August 31, 2020.

1Based on the MSCI Japan index

Important Risks Related to this Article

There are risks associated with investing, including the possible loss of principal. Foreign investing involves special risks, such as risk of loss from currency fluctuation or political or economic uncertainty. The Fund focuses its investments in Japan, thereby increasing the impact of events and developments in Japan that can adversely affect performance. Investments in currency involve additional special risks, such as credit risk and interest rate fluctuations. Derivative investments can be volatile, and these investments may be less liquid than other securities, and more sensitive to the effects of varied economic conditions. As this Fund can have a high concentration in some issuers, the Fund can be adversely impacted by changes affecting those issuers. Due to the investment strategy of this Fund it may make higher capital gain distributions than other ETFs. Please read the Fund’s prospectus for specific details regarding the Fund’s risk profile.

Jeremy Schwartz has served as our Executive Vice President, Global Head of Research since November 2018 and leads WisdomTree’s investment strategy team in the construction of WisdomTree’s equity indexes, quantitative active strategies and multi-asset model portfolios. Mr. Schwartz joined WisdomTree in May 2005 as a Senior Analyst, adding to his responsibilities in February 2007 as Deputy Director of Research and thereafter, from October 2008 to October 2018, as Director of Research. Prior to joining WisdomTree, he was head research assistant for Professor Jeremy Siegel and helped with the research and writing of Stocks for the Long Run and The Future for Investors. Mr. Schwartz also is co-author of the Financial Analysts Journal paper, What Happened to the Original Stocks in the S&P 500? He received his B.S. in Economics from The Wharton School of the University of Pennsylvania and hosts the Wharton Business Radio program Behind the Markets on SiriusXM 132. Mr. Schwartz is also a member of the CFA Society of Philadelphia.