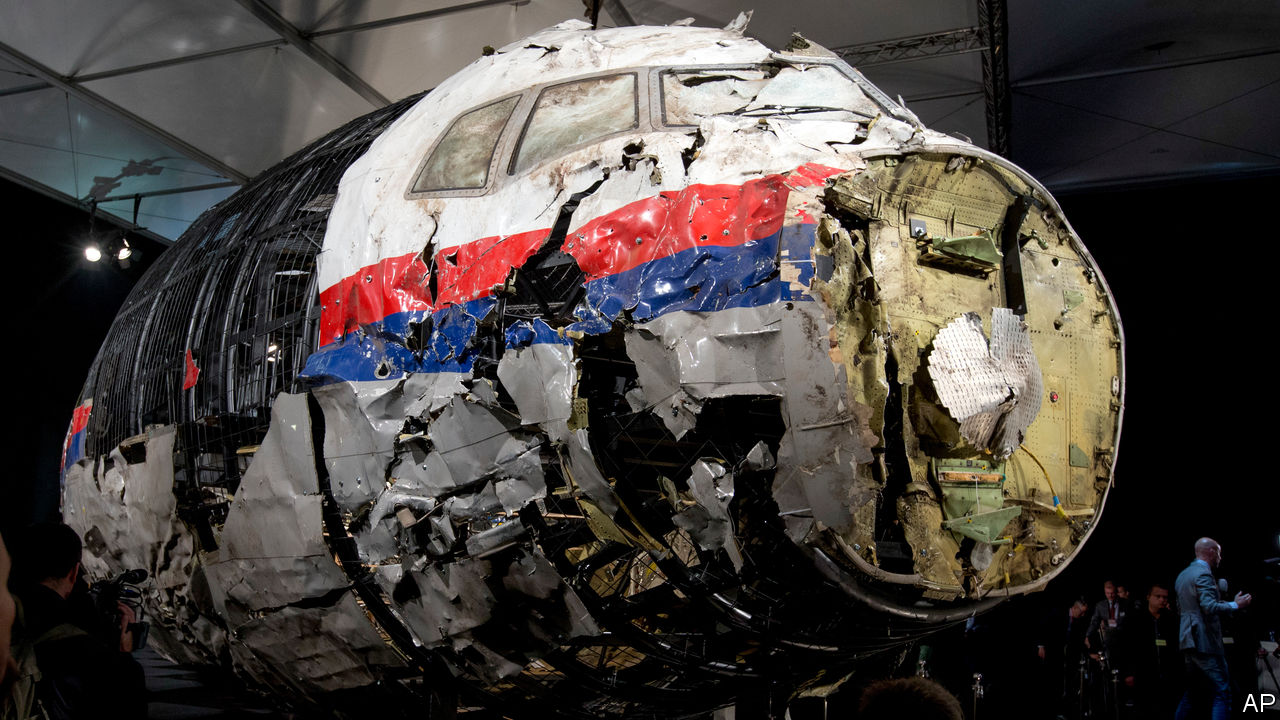 FOR THE 298 victims of Malaysian Airlines flight MH17, shot down by a Russian Army missile over Ukraine in 2014, even a hint of justice has been a long time coming. But each year, investigators and prosecutors edge the case forward. On March 9th a court in the Netherlands will commence the criminal trial of four men (three Russians and one Ukrainian) accused of playing crucial roles in the decision to fire the missile. The hearing will be held in a courtroom next to Schiphol airport in Amsterdam, from where the flight to Kuala Lumpur took off. The defendants will be absent, though at least one will be represented by lawyers, since Russia does not extradite its own nationals and the location of the Ukrainian is unknown. But the biggest absence of all will be that of the Russian government, which bears the ultimate responsibility for supplying, and probably firing the missile.

Dutch prosecutors say their case runs to 30,000 pages of documentation. After the crash, a research unit called the Joint Investigative Team (JIT)—including investigators from the Netherlands, Australia, Belgium, Malaysia and Ukraine—spent five years meticulously establishing what had happened. The plane’s wreckage was shipped to the Netherlands and reconstructed. Ballistics experts established that it had been shot down by a Russian-made BUK anti-aircraft missile. Mobile-phone conversations intercepted by the SBU (Ukraine’s secret police) appeared to show that Russian military personnel detailed to help pro-Russian separatists in Donbass had directed the operation.

Meanwhile Bellingcat, a digital-forensics group, collected thousands of public-source records from ordinary citizens’ smartphone pictures and dashboard cameras. These showed a convoy including a BUK launcher driving from a Russian army base to the Ukrainian border in the days before MH17 was shot down, and returning just afterwards with one missile missing. The JIT later confirmed Bellingcat’s research, and recovered the spent fuselage of a BUK missile from a field in Ukraine. In 2018 the JIT’s prosecutors announced they had determined that the missile belonged to the Russian army’s 53rd Anti-aircraft Brigade.

The men now facing trial all played important roles in Donbass’s rebel militias in 2014. The most senior, Igor Girkin (also known as “Strelkov”), a Russian nationalist and former army officer, was the minister of defence of the self-proclaimed Donetsk People’s Republic. He maintains his innocence. Sergei Dubinski and Oleg Pulatov, both Russian, and Leonid Kharchenko, a Ukrainian, served in the rebels’ military-intelligence unit. They are accused of having played command roles, rather than of firing the rocket themselves. It is unclear how they will plead or even whether they will respond to the charges. The SBU’s mobile-phone recordings allegedly include two of the defendants conversing with senior Russian officials. No one believes they intended to shoot down an airliner. Rather, the theory is that they assumed the plane belonged to the Ukrainian air force and did not bother to check.

Russia denies having anything to do with the downing of MH17 or giving support to the Donbass rebels. Since the crash it has issued a stream of disinformation and (often conflicting) alternative theories of what happened. The Russian defence ministry released supposed radar data of the incident showing a second aircraft, perhaps a Ukrainian fighter. When the data were shown to have been faked, the ministry never spoke of it again. Last summer after Ukraine captured Vladimir Tsemakh, allegedly an air-defence specialist for the rebels, Russia insisted he be included in a prisoner exchange (an odd demand given that it claims never to have supported the separatists). He was sent to Russia over Dutch objections, and is now believed to be living in Donbass again.

READ ALSO  Student Housing, One of the Most Hyped Asset Classes, Runs Out of Students

The trial’s first days will be devoted to procedural issues, and the defendants’ absence will rob the scene of drama. But although much of the evidence is already public, Dutch prosecutors are thought to have much more unrevealed information which will come out at trial. The trial is expected to last at least for the rest of the year. Even if it results in convictions in absentia, Russia is highly unlikely to change its mind about extraditing the accused men.

Yet while the defendants may not be present, the families of those who died on Flight MH17 will be. Time has been allotted for them to make statements to the court. Russia’s strategy of obstruction and obfuscation has frustrated their demands for justice, but the trial may provide closure for some.