First Solar (NASDAQ:FSLR) remains one of the strongest players in the solar industry. Despite the pandemic, First Solar has managed to climb to multiyear highs in recent months. The company’s growing focus on its core manufacturing and project businesses clearly appears to be paying off. While First Solar still has many challenges ahead of it, the company is in a strong position relative to its competitors.

First Solar has skyrocketed to multiyear highs during the pandemic.

First Solar has made a notable effort to focus on its core businesses over the past few years. Whereas many solar companies have been integrating different aspects of solar into their businesses, First Solar has taken the opposite approach by selling many of its more unproductive businesses. The company is now focusing most of his attention on its manufacturing and project businesses.

By selling its EPC and O&M, First Solar will be able to focus more heavily on its core competencies. Given how competitive the solar industry has become, a more concentrated approach should pay off. In fact, First Solar was able to increase its module gross margins and EPS on a Q/Q basis to 29.5% and $1.45 respectively in Q3.

While First Solar’s more specialized approach comes with many advantages, it also limits the company’s addressable market. By confining itself to the module manufacturing and solar project business, First Solar will have less growth potential than more vertically integrated solar companies. However, First Solar will not be spread as thin in an increasingly competitive industry.

READ ALSO  The Attack Of The Watermelons

First Solar will now focus most of its attention on core businesses like module manufacturing. 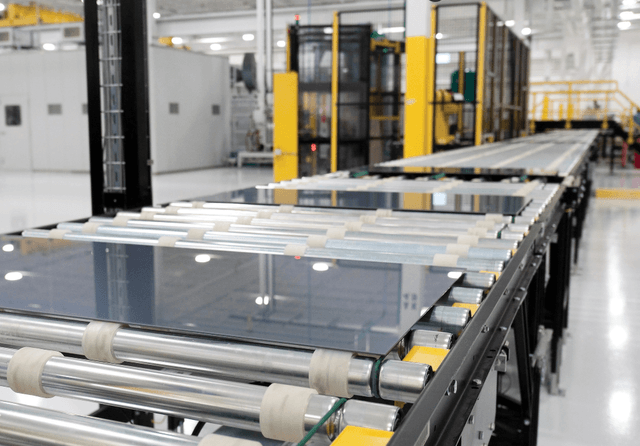 First Solar has managed to maintain one of the strongest balance sheets in the industry for years now. The company was able to increase its net cash position to ~$1.4 billion in Q3 largely through module operating cash flows and system sales. This makes First Solar one of the safest bets in the solar industry at the current moment.

Despite an ongoing pandemic, First Solar reported net sales of $928 million in Q3, which was up $285 million from Q2. Whereas many other major solar companies are struggling just to stay solvent, First Solar continues to build a rock-solid balance sheet. The company has the opportunity to gain market share during the pandemic as weaker competition is edged out of the market.

The solar module and project businesses have proven to be incredibly competitive. As such, First Solar could find itself stuck in relatively low-margin businesses over the long term. The module manufacturing and project space will likely only become more competitive as larger players invest more heavily in solar.

Whereas the solar industry has long been dominated by lower cost commodity-style manufacturers, this could change as innovation ramps up. There are now even large technology companies like Tesla (NASDAQ:TSLA) attempting to revolutionize certain aspects of solar. Tesla’s Solar Roof, for instance, has the potential to completely upend the residential solar industry. It is unclear how First Solar will fare in a hyper innovative environment.

First Solar is in a stronger position right now than it has been for a long time. However, given the challenges facing First Solar, investors would be wise to be cautious of this company at its current market capitalization of $8.9 billion. There is no telling how the solar industry will change now that major large and powerful companies are starting to enter the market.

Disclosure: I am/we are long TSLA. I wrote this article myself, and it expresses my own opinions. I am not receiving compensation for it (other than from Seeking Alpha). I have no business relationship with any company whose stock is mentioned in this article.

Previous PostOn path to new all-time high? Bitcoin extends its monster rally as it approaches $19,000Next PostLoneliness and me | Financial Times