First And Foremost, We Haven’t Yet Reached The Point Of A Proper Correction

We are on track for the worst September since 2002, when the market sank 11% for the month. That’s according to a Marketwatch article published today. But there’s a problem with this scare-mongering article – it may not come to pass. Here are the hard numbers:

The September rout is all about Energy

Here is the list of the 11 sectors of the S&P 500 index, ranked in order of their September 2020 returns from lowest to highest. Energy is down the most, followed by Tech. Materials performed the best.

Notice that Energy is also the worst-performing sector year to date. Technology is second-worst in September, but still the year-to-date leader.

Possible explanations for the drop in Energy stocks

Will the dip-buyers return to save the day?

The chart below shows that the intrepid dip-buyers have only allowed three declines of 5% or greater since the recent bottom in March 2020. Will they show up once again? They tried and failed on September 9, 11, 14, and 15.

But don’t underestimate the dip-buyers. Mostly retail types, they have been in control of this market since March 23rd. They have the Powell Fed on their side. And there seems to be no limit to the amount of risk they are willing to take, including options and leverage. 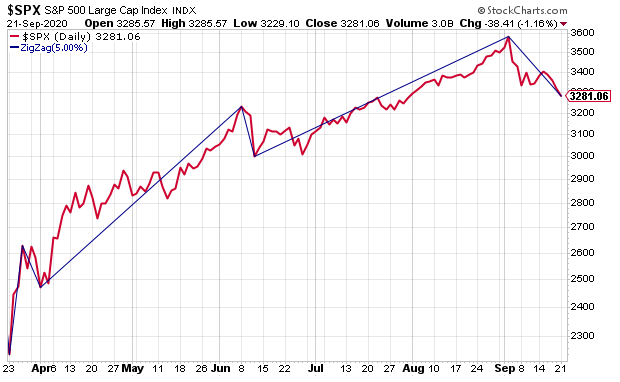 Probabilities for what comes next

I do a lot of work with probabilities. Here are a few observations I’ve made, based on today’s decline and the historical record of what has happened after similar events. I use Bayesian conditional probabilities to arrive at these numbers.

As Benjamin Graham said, “In the short run, the market is a voting machine but in the long run, it is a weighing machine.” Since the recent bottom on March 23rd, investors have been voting for a speedy recovery and a return to normal. Today’s action marks the beginning of the weighing machine market.

Are you looking for more high quality ideas? Consider joining The ZenInvestor Top 7, my Marketplace service. The Top 7 is a factor-based trading strategy. Its screening algorithm prioritizes reasonable price first, then the momentum, and finally projected earnings growth. The strategy produces 5-7 names, and rebalances every 4 weeks (13 times per year). The goal is to catch healthy companies that have gone through a rough period, and are now showing signs of making a strong comeback. Join now with a two week free trial.

READ ALSO  Treason In America: An Overview Of The FBI, CIA, And Matters Of "National Security"