Federal Reserve officials will meet in the immediate aftermath of the US election, giving them a chance to respond swiftly to any market turmoil from the vote and debate the impact of new coronavirus case surges on the recovery.

Investors and policymakers are likely to be digesting the outcome of the race for the White House as the Federal Open Market Committee holds its regularly scheduled meeting on Wednesday and Thursday.

While the Fed is highly averse to commenting on political developments, economists say that the US central bank would consider shoring up financial markets if a contested or uncertain outcome caused severe disruptions.

“The Fed will want to keep its head down and focus on the economy and not focus on the politics . . . [but] if there is volatility in the market, they will certainly stand ready to try to provide liquidity, to ensure market functioning,” said Randall Kroszner, a former Fed governor who is now deputy dean of the University of Chicago’s business school.

Krishna Guha and Ernie Tedeschi, economists at Evercore ISI, said in a note to clients that the Fed was primed to deliver “surge” asset purchases to “contain” any post-election disruptions to US Treasury and mortgage-backed securities markets of the kind that happened in March. They said the Fed could also potentially beef up corporate debt purchases if needed.

“We think the Fed will distinguish between the emergency policy response that might be needed in the event of a political crisis that causes dislocations in financial markets, ongoing credit market support and development of its ongoing monetary policy,” Mr Guha and Mr Tedeschi wrote.

If there is any degree of uncertainty about the outcome of the election, [Mr Powell] will have to be very forward in terms of assuring the market

Economists are not expecting any big monetary policy changes at this week’s FOMC. At its last gathering, the Fed adopted new guidance on interest rates, which entrenched its loose monetary policy until the US economy reaches full employment and substantially higher inflation, conditions that could take years to achieve.

While the US economy has been recovering faster than expected in recent months, Fed officials are still deeply concerned about the impact of the recent rise in coronavirus cases and hospital admissions — as well as the. lack of additional fiscal stimulus from Washington.

Even if they do not take any further action this week, US central bankers are expected to continue discussions about providing more clarity on their asset purchases, an issue which has gained urgency amid a steady sell-off in long-dated Treasuries over the past few months and heightened expectations of more supply hitting the market.

The benchmark 10-year Treasury yield now hovers around its highest level since June, having climbed from below 0.7 per cent at the start of September to 0.85 per cent. Meanwhile, the yield on the ultra-long 30-year note has edged 0.2 percentage points higher to 1.62 per cent over the same period.

Recently, the Fed has been buying Treasury securities of all maturities at a pace of about $80bn a month. But to insure against a destabilising rise in borrowing costs that could upend the economic recovery, some market participants believe the Fed must soon focus the bulk of its bond-buying on longer-term debt, or increase the aggregate size of its purchases.

While the majority of Treasury auctions have gone smoothly, a handful of disappointing results have kept investors on edge about the market’s capacity to absorb record-size blocks of debt.

“Every month there is more duration coming into the market, and you are seeing more indigestion,” said Marvin Loh, senior global markets strategist at State Street Global Markets. “They do need to start rolling out policies that start to support their new longer term goals.”

Diana Amoa, a fixed income portfolio manager at JPMorgan Asset Management, said the Fed is likely to hold off on this policy shift until there is clarity on the election’s outcome and the magnitude of any forthcoming fiscal stimulus. But if financial markets or the economy take a sharp turn for the worst, it might have to act sooner. 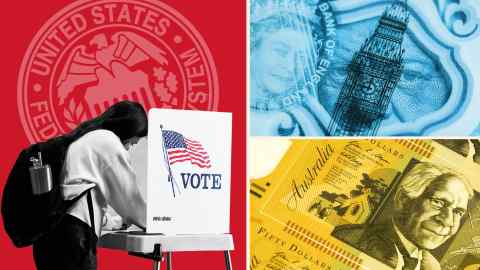 “If we start to see the data deteriorate or a double-dip recession that causes financial conditions to tighten aggressively, then I think they may be forced to be more aggressive,” she said.

The results of the US election could also have significant ramifications for the central bank itself. For instance, it is unclear whether Joe Biden, the Democratic nominee, would seek to keep Jay Powell in his post as Fed chair if he wins.

But at this week’s FOMC, the Fed is unlikely to offer much political reaction, beyond using its tools to keep markets steady, if needed.

“If there is any degree of uncertainty about the outcome of the election, [Mr Powell] will have to be very forward in terms of assuring the market,” said Peter Tchir, head of macro strategy at Academy Securities. “If we have more clarity, he will focus on the limitations of monetary policy and the need for fiscal policy.”