The Federal Reserve has turned down Goldman Sachs’ request for less onerous treatment after the results of its annual stress test, leaving the bank with the highest capital requirement among its large peers.

The Fed on Monday published the final common equity tier 1 (CET1) requirements for the 34 largest US banks. Goldman’s requirement, at 13.7 per cent, was unchanged from the figure indicated after the stress test result was delivered to the bank in June.

The US central bank revealed that Goldman was among five banks that formally appealed the results. The other banks that requested reconsideration — all of which were also turned down — were BMO, Capital One Financial, Citizens, and Regions.

Goldman said on a call with investors last month that the bank was in “active dialogue” with the Fed about its stress test results. One person familiar with those conversations said Goldman believed its strong second-quarter results, which featured bumper capital markets revenues, showed that its trading operation was “countercyclical”, because revenues had risen with volatility.

Goldman’s fixed-income trading operation reported revenues of $4.2bn in the second quarter, up from $1.7bn the year before.

At the end of the second quarter, the bank’s CET1 ratio was 13.6 per cent, up from 13.3 per cent at the end of 2019. Goldman executives have said they can meet the 13.7 per cent requirement, which takes effect in October, without changing its strategy.

Morgan Stanley, at 13.4 per cent, had the next highest requirement. Like Goldman, it has a large capital markets operation, an area where this year’s tests were particularly rigorous.

This year is the first time in which the Fed capital requirements include a “stress capital buffer”, designed to see banks through severe shocks and a deep recession. The stress buffers are equivalent to a bank’s estimated capital erosion under the Fed’s most severe scenario, plus the dividends they plan to pay.

The Goldman Sachs and Morgan Stanley stress buffers were 6.7 and 5.9 per cent, respectively. 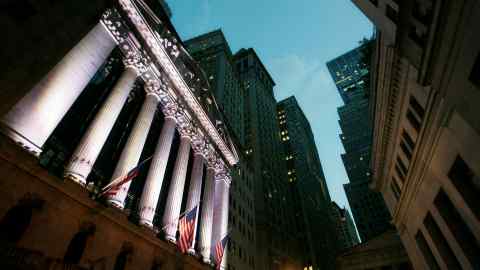 These were not, however, the highest stress buffers among the large banks. The US operations of Deutsche Bank and Credit Suisse had stress buffers of 7.8 and 6.9 per cent, respectively, although their total CET1 requirements were lower because they are not considered global systemically important banks, and as such avoid an additional capital “surcharge” from the Fed.

Goldman and Morgan Stanley face surcharges of 2.5 and 3 per cent, respectively.

Goldman shares were up 0.6 per cent in lunchtime trading on Monday, outpacing a broadly flat US equity market.