Facebook (FB) is currently trading at a PE NTM of 27.6x, slightly above its 5 year historical average. Relative to its industry, Facebook trades at a PEG NTM of 0.8x. This valuation is perplexing for a company that has 3.1Bn monthly active users (or MAU) across all of its platforms and has generated a 10% growth in ad revenue YoY in Q2’2020 despite overall ad spending decreasing 30% due to COVID-19.

Facebook offers an attractive asymmetric risk-reward opportunity of 1:8; my equally-weighted DCF and CompCo model valuation implies that FB’s fair value is $425 representing a 64% gap to target.

1) Facebook’s superior social media offerings provide a strong competitive moat and the opportunity to cross-sell and integrate at lower costs.

Facebook has 4 primary social media platforms: Messenger, WhatsApp, Instagram and Facebook. 99% of FB’s revenue is derived from advertising across these 4 platforms, of which Facebook accounts for the lion’s share of revenue (Whatsapp and Messenger have slowly begun to monetize segments of their users). 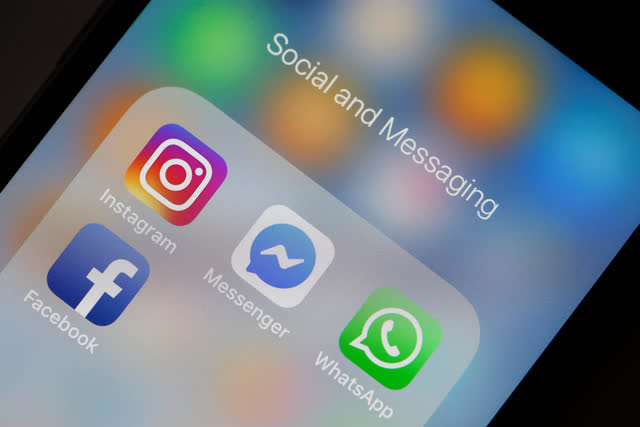 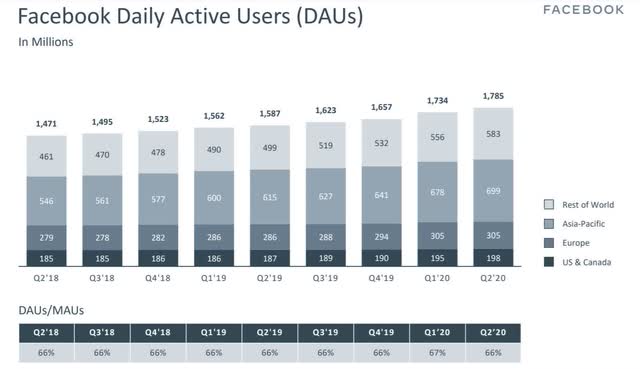 FB does not report MAUs, DAUs or Average Revenue per User (or ARPU) for its Whatsapp, Instagram and Messenger platforms. However, we can derive a collective DAU count for these platforms which FB classifies as its “Family” products. The DAU of WhatsApp, Instagram and Messenger is simply Facebook’s DAU minus the Family DAU (which includes Facebook’s DAU thus the subtraction). In Q2’2020, the Family DAU without Facebook, was 685Mn representing a 24% increase on a YoY basis. The Family products also highlight the increased user engagement with a much higher DAU/MAU ratio of 79%. 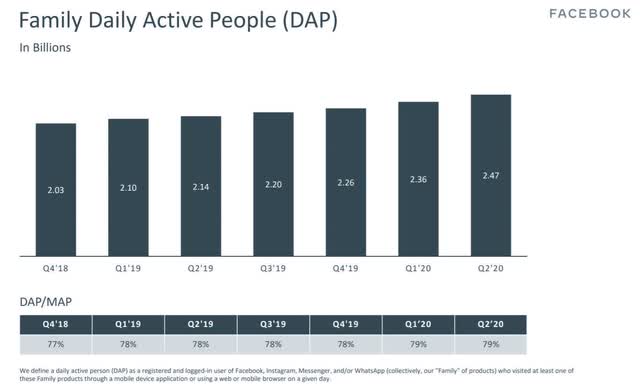 For years FB has been hinting towards integrating its 4 primary platforms into a unified offering. It started with Mark Zuckerberg’s 2019 letter: “A Privacy-Focused Vision for Social Networking“. He stated the need for cross-integration:

Now that some of the political pressure has started to wane, there is a renewed effort at FB to beta test key cross-integration between its products.

One such example is allowing Messenger and Instagram users to message from one app to another or see videos with friends during a video call (known as the “Watch Together” feature). Users will also be able to search for profiles across both platforms simultaneously. 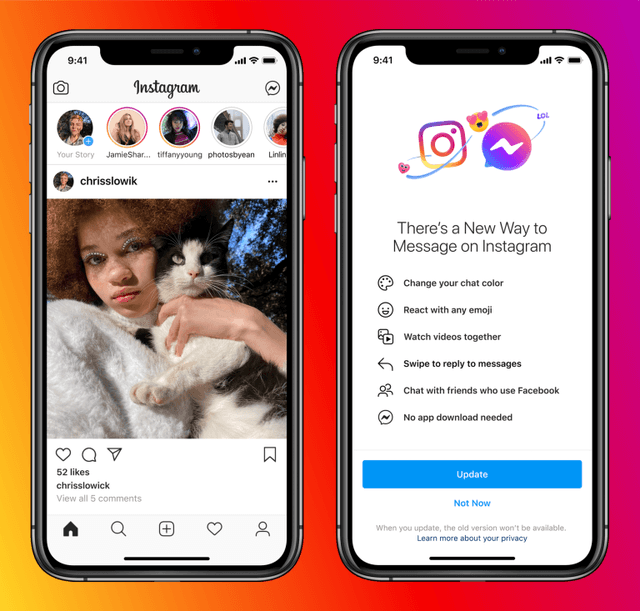 Additionally, cross-integration should assuage the privacy concerns often raised with Facebook since all of its platforms are end-to-end encrypted. People who use Messenger to send and receive SMS cannot have their texts end-to-end encrypted because the SMS protocol is not encrypted. However, with the ability to message across FB’s services, as planned by Zuckerberg, users will be able to send an encrypted message to someone’s phone number in WhatsApp from Messenger.

In terms of cross-selling, over 180Mn businesses operate across the FB family with over 9Mn advertisers. Note: the top 100 advertisers account for 16% of revenue, down from 20% a few years ago. This increased revenue diversification will be further boosted by the introduction and rapid adoption of Facebook Shops (May 2020) and WhatsApp business (January 2018). In the most recent Earnings call, Facebook reported 50Mn users for its WhatsApp business segment (for some context, the last reported number was 5Mn).

READ ALSO  Our Bizarre Economy 2.0 Is A Spending Based Illusion

One way in which integration could help with user experience and convenience is on Facebook Marketplace you could just have someone WhatsApp message your messenger account without have to disclose your number. This could also help advertisers easily create and distribute ads seamlessly across platforms or have users post one story which reaches all their friends faster and more conveniently.

It is abundantly evident that Facebook’s ability, even without integration, to engage and monetize users is not going away. This has led to revenue stickiness while, through Facebook Shops and WhatsApp business, simultaneously decreased revenue concentration risk. The basis for growth from these products is consistent, not to mention further drivers of topline growth: the Oculus or Portal products which grew 40% YoY to $366Mn, or Mixer (Facebook’s gaming platform acquired from Microsoft (MSFT)) which has the 3rd largest market share after Amazon’s (AMZN) Twitch and Google’s (GOOGL) YouTube.

Note on COVID-19: Overall ad spending decreased 30% in Q2. Facebook’s market share of U.S. ad totals increased from 10.7% to 12.7% while Instagram captured a 7.5% market share. This drove Facebook’s advertising revenue up 10% YoY to $18.3Bn.This not only shows the dominance of Facebook as a preferred advertising medium, but also highlights the resiliency and adaptability of its products. 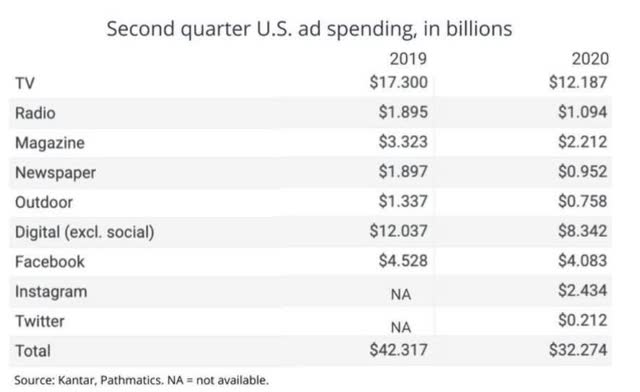 2) Facebook has elite fundamentals, high growth and a stellar balance sheet with experienced and heavily invested management at the helm.

FB’s superior products have insulated its financial statements from exogenous shocks like the FTC fine or COVID-19 ad depression.

Over the past 5 years, Facebook has grown its revenue at an astonishing CAGR of 41.5%. This has led to a 2019 net income margin of 26.1% which is about 510bps more than that of its next closest competitor (by business model) GOOGL. Facebook has a robust gross margin of 82% (note: FB accounts for Depreciation in its COGs) while churning out a tremendous unlevered free cash flow equivalent to ~22.5% of revenue. 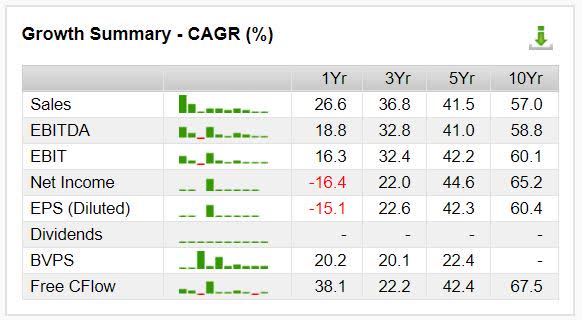 Mark Zuckerberg’s leadership of Facebook, from its early days has shown the ability of FB to navigate tough times while still delivering on growth and earnings. It is also clear, that the strategy of Facebook is geared towards the future with focus on AR and VR and international expansion. Mr. Zuckerberg currently owns 15% of FB, and is personally heavily invested in the future of the company.

The company’s growth prospects are insulated by a mountain of cash and short term investments, totaling ~$55Bn in 2019. Though Facebook has never paid dividends and does not intend to as per its 10k, it does have a share repurchase program that has $14.9Bn left in authorization. 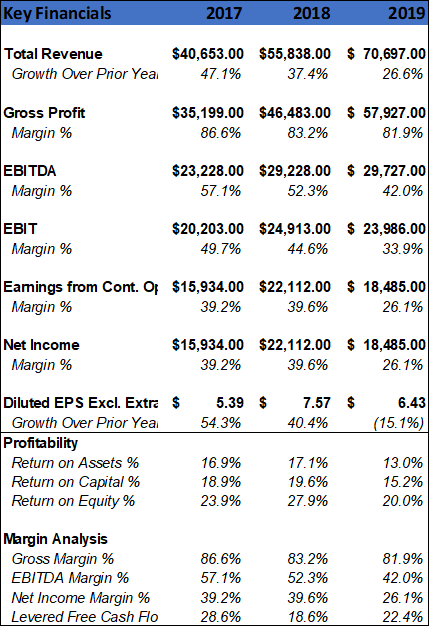 3) Facebook’s foray into India through its $5.7Bn investment in Reliance Jio Platforms is a game-changer and has been underpriced by the street.

Having used Facebook and Reliance products, and seen the impact Reliance (listed on NSE and BSE) has made in India over the past decade, I have an informational edge over the street in understanding the significance of FB’s $5.7Bn investment.

What is Reliance Jio?

Reliance Jio is the telecommunications arm of the Indian petrochemical giant Reliance Industries. It operates a national LTE network and now offers optic-fiber based internet connection enabling speeds up to 1Gbps. Launched in 2016, Jio, through aggressive price cuts, became the leading telecom operator in India by 2019.

Jio now has a 32% market share in a telecom market of 1.15Bn Indians. That is, more customers than the entire population of the U.S. 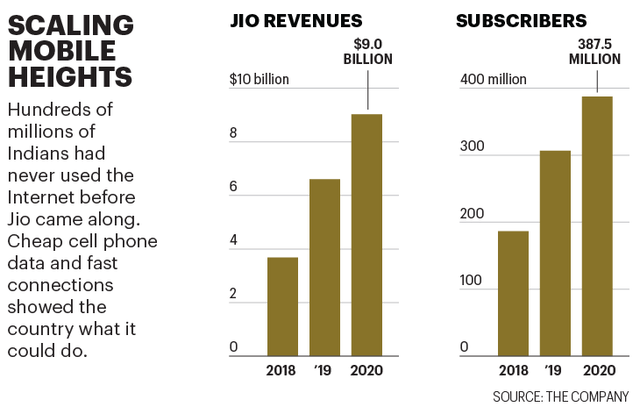 Facebook’s $5.7Bn investment in Jio was brilliant. WhatsApp is used almost ubiquitously in India and virtually has no competition. In two years, Indian WhatsApp users doubled to 400Mn MAUs by 2019. India is now the largest market for WhatsApp. Jio Phones, over 100Mn shipped and accounting for 25% of the customer base for Jio, operate on KaiOS. WhatsApp expanded its presence so that KaiOS phones can download the app causing Indians to nearly break the internet. The Jio investment was simply an extension of the sturdy pre-existing relationship between Jio and Facebook.

Through the new partnership, WhatsApp will handle the payment system and JioMart will handle order fulfillment and dispatch. An initial test of WhatsApp pay for 1Mn users was already ongoing. Now, with the JioMart integration, the service is already available to tens of millions of users across the greater Mumbai area with more than 1,200 stores participating. 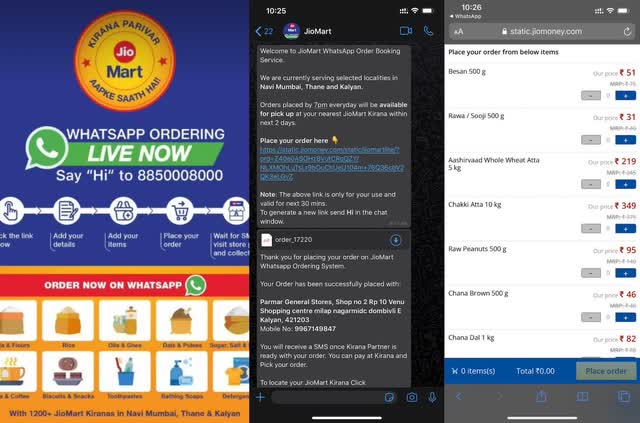 Here are 3 key reasons how the Jio investment can propel growth for FB:

Facebook’s investment genius was soon recognized by others across the globe. In the 84 days after FB’s investment, Jio raised ~$20.7Bn at a ~$70Bn valuation from 14 investments with companies like Intel (INTC), Qualcomm (QCOM), Google (GOOGL) and KKR (KKR) taking part. If Jio’s fund-raiser alone was a country it would be the 110th largest country in the world ranking above Afghanistan and Laos (based on nominal GDP 2019). 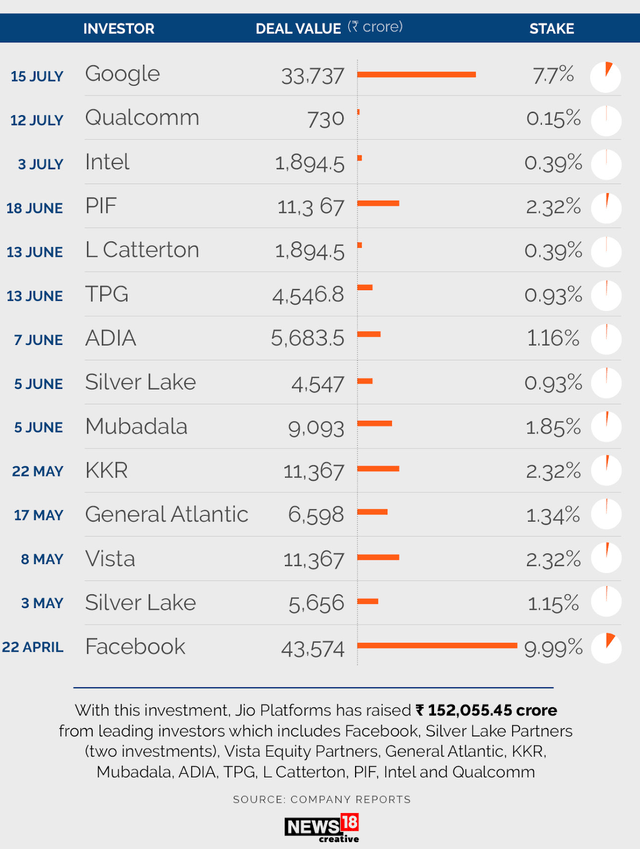 Facebook’s social media dominance has been clouded by regulatory and political fears in the U.S. While its foray into India has been myopically underpriced by the street. With positive effects on revenue from COVID-19 along with a stellar balance sheet and management, Facebook’s NTM PE of 26.9x (slightly above its 5 year average) is confounding.

Facebook’s implied fair value by an equally-weighted DCF and CompCo model is $425, representing a 64% upside from the CMP of $260. With the range of valuations possible with my bear case indicating $234 to the bull case indicating $468, FB’s investment risk-return is asymmetric.

The upside is 8x higher than the downside based on the CMP of $260. 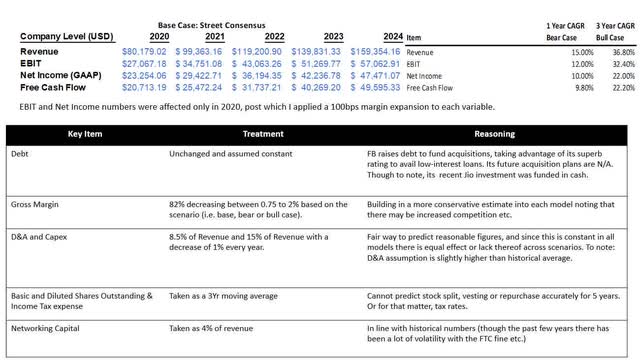 Source: Created by the Author

Assumptions used for the CompCo and weighted average cost of capital: 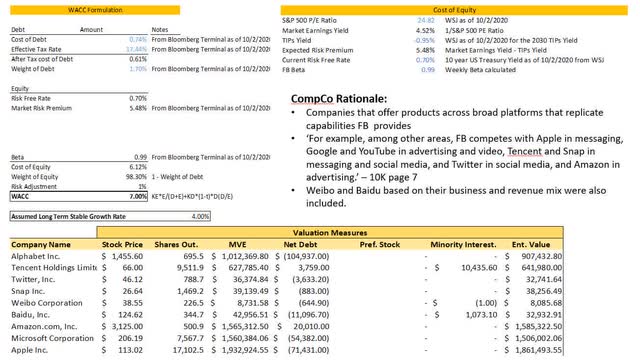 Catalysts and Risks to the Investment Thesis

In conclusion, Facebook is an undoubted leader in social media platform offerings with over 3.1Bn users monthly. FB’s stellar balance sheet and management, along with forays into India, has not only ensured that it has come out of the COVID-19 crisis relatively unscathed but also positioned it optimally for future growth.

With the recent tech sell-off, FB’s share price has fallen 10.7% offering a good chance for prospective investors. Facebook currently trades at $260 and a PE NTM of 27.6x, slightly above its 5 year historical average. Relative to its industry, Facebook trades at a PEG NTM of 0.8x.

This does not make sense. Facebook will be a $1Tn+ company soon enough. 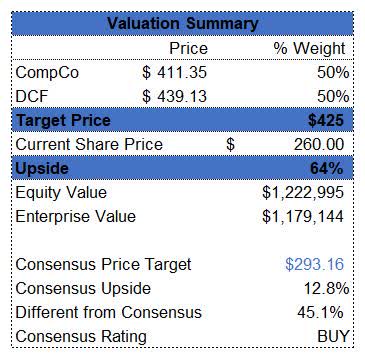 Disclosure: I am/we are long FB. I wrote this article myself, and it expresses my own opinions. I am not receiving compensation for it (other than from Seeking Alpha). I have no business relationship with any company whose stock is mentioned in this article.