Formula One has renegotiated the crucial deal that commits racing teams to the global series and sets out how revenues are split, after months of delays because of the coronavirus pandemic.

It is the first time the Concorde Agreement, which governs how F1 shares revenues with racing teams, has been renegotiated since Liberty Media, the US group controlled by billionaire John Malone, acquired the racing competition in an $8bn deal in 2017.

Chase Carey, chairman and chief executive of F1, told the Financial Times on Wednesday that the deal, together with plans to introduce a $145m budget cap on teams from next season, would set the long-term foundation for growth.

“We do want to make it a sport more about how well you spend your money, not how much you spend,” said Mr Carey, who has run F1 since replacing Bernie Ecclestone, the billionaire who transformed the sport into a global phenomenon over four decades.

Securing consensus among the 10 teams was complicated by the pandemic, which put the Concorde Agreement on the backburner, while Liberty Media injected $1.4bn into the sport after revenues dried up as the season was delayed for four months.

The new deal, which will run from 2021 until 2025, will distribute a $1bn pot derived from television rights, promoter fees and advertising revenues, more fairly among the teams.

The previous arrangements had favoured larger teams, such as Ferrari, Mercedes and Red Bull, giving them a significant financial advantage over smaller competitors such as McLaren and Williams through higher payments. Ferrari, for example, receives a bonus because it is the only team that has raced every season in F1 since the competition’s inception in 1950.

Although Mr Carey declined to give details on the sums involved and how F1 would share revenues with teams, he said the new Concorde Agreement could make teams more attractive to investors.

“It’s no fun to be in a sport and feel you can’t be competitive,” he said. “You may be an underdog but you want an opportunity to win . . . the cost cap and a more balanced revenue distribution clearly make it a healthier business model.”

F1 secured agreement from all 10 teams despite a late clash with Mercedes, which is leading this year’s championship in the hunt for a record seventh consecutive title. Toto Wolff, the Mercedes motorsport chief, had complained that the team stood to be “the biggest victim” of the revised revenue split.

The existing deal expires at the end of this year and Mr Carey said he would like to see less “drama” around future changes to the agreement.

The continued support of all 10 teams will allow Liberty Media to focus on restoring F1 to health after the pandemic. Mr Carey is targeting a full 22-race season in 2021.

He is hoping that F1 will be able to hold at least 15 races this season in order to meet the terms of its broadcasting contracts. However, widespread bans on mass gatherings have hit the revenues F1 makes from ticket sales and promoters who pay for the right to host events. 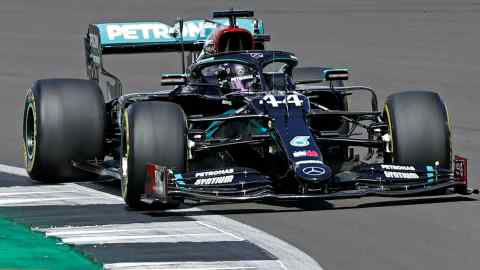 Teams have also struggled without races. While F1 was able to protect itself by cutting its costs, the lack of races meant that second-quarter team payments dropped from $335m to nil.

Although F1 has become more digitally savvy since the takeover, focusing on attracting a younger audience through social media channels that were neglected under Mr Ecclestone, Liberty Media has struggled to expand the racing series into the US and acknowledged that attracting new sponsorships has been harder than expected.

“I think we’re doing the things to grow the sport,” said Mr Carey. “We’re certainly not declaring victory, we’ve got a lot to do . . . but we’re on the right path.”