ExxonMobil booted from the Dow after close to a century

S&P Dow Jones Indices cleaned out two of the oldest constituents of the Dow Jones Industrial Average late on Monday, saying it would replace ExxonMobil and Raytheon Technologies in its historic barometer of American blue-chips.

The oil major and industrial conglomerate were two of three companies booted from the 30-strong index, along with drugmaker Pfizer, to allow for a reshuffle prompted by Apple’s decision to split its stock.

The changes will go into effect before trading begins on August 31, at the same time as Apple’s four-for-one stock split takes effect, a move that would otherwise dramatically reduce the weight of technology companies within the Dow.

Unlike other S&P indices, where companies’ weightings are related to their market capitalisation, the Dow is calculated according to its constituents’ share prices. A rally in Apple shares this year had made it the most influential stock within the index, accounting for more than 12 per cent of the Dow, but the stock split will reduce the iPhone maker’s weight in the index to about 3 per cent.

Salesforce has grown to be one of the biggest software providers in the world, known for its cloud-based sales automation software, while the elevation of Amgen reflects the rise of biotech, pushing out a more traditional drugmaker.

For executives of Charlotte-based Honeywell, meanwhile, the inclusion in the Dow is a homecoming. The company was removed from the index in 2008. Before it was cut, it could trace its membership back to 1925.

The members of the Dow have changed only rarely in recent years. While Apple was added in 2015 and Nike and Goldman Sachs gained entry in 2013, the majority of companies within the Dow on Monday had been in the index for more than 10 years.

The removal of Exxon will leave the Dow with just one energy company in its cohort: Chevron. Exxon, known as Standard Oil of New Jersey before it changed its name in 1972, was added to the index in 1928 when the Dow expanded to 30 stocks from 12. 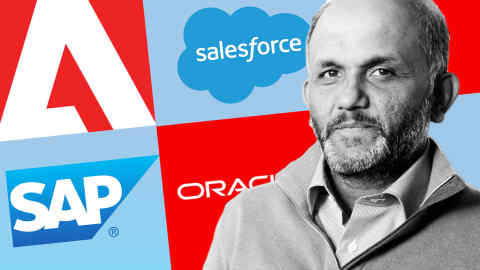 Raytheon’s history with the Dow also dates back decades. United Aircraft was added to the index in the 1930s. The company changed its name to United Technologies in 1975 and finalised a merger with Raytheon this year, taking the name Raytheon Technologies.

While the Dow Jones Industrial Average has long been turned to by US households as a gauge of the stock market’s performance, it ceded its relevance in financial markets decades ago. Stock funds in the country are typically benchmarked to the market cap-weighted S&P 500, which is run by the same company that owns and calculates the Dow.

The additions later this month will make insurance provider UnitedHealth the largest component in the Dow, followed by retailer Home Depot and Amgen.