Exxon Mobil (XOM) has made headlines once again this week, as what was the largest company in the world in 2013 has been pulled off of the Dow Jones Industrial Index. Exxon has been beaten up by the price of oil but has not done themselves any favors by destroying their balance sheet due to continued stubbornness around their dividend. I do not doubt that the stock is being severely punished, and being removed from the index may be a sign of the bottom, but Exxon has lots of work to do yet. 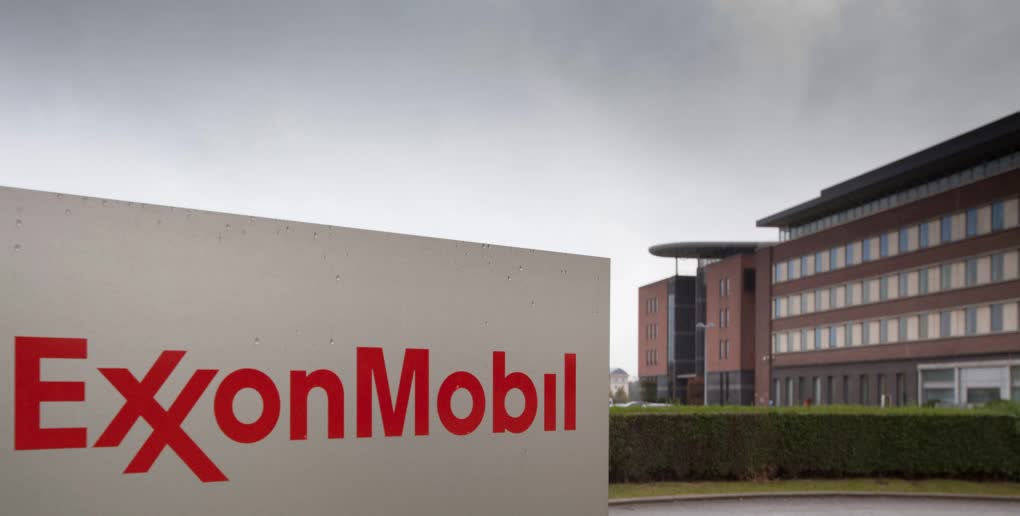 How Is The Price Of Oil Looking?

The largest concern for any Exxon shareholder should be the price of oil. Based on the data we saw from Q2, it is taking quite a toll on the company’s bottom line. Is this the end of oil? No. Not at all, in my opinion.

Looking below, you can see the price of oil over the last 30 years. Going back almost exactly 30 years, the price of oil was $77. Throughout 2018 and 2019, we saw $50-70 oil fairly consistently. This is the kind of range I would expect over the next few years. There is no question that oil is still cheap today as it sits under $44 a barrel. 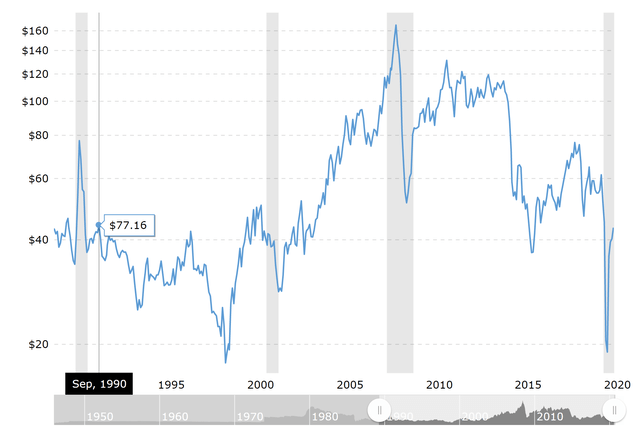 The oil world is still suffering from the effects of COVID-19 as demand is still down. Because of this, we have seen capital expenditure across the industry get slashed (Exxon has cut theirs by 30% at this point). As you can see below, it would appear as if the energy consumption rate has bottomed and is on its way up. Notice that the fall is also typically where we see consumption rates increase as well. This chalks up well for the industry as a whole as we are still very far off the levels needed for full sustainability. As consumption increases, we should see the price begin to tick higher, as long as the market isn’t flooded with supply, which is always a possibility.

At the end of the day, the price of oil is out of Exxon’s control. They need to take care of what they can control to reward shareholders properly when the recovery gets underway.

Is Exxon Being Fiscally Responsible?

So, we know the price of oil is a massive hurdle for the company, so they must be very responsible with their cash being one of the largest companies in the world… right? Wrong. If you have read my previous articles, you know how I feel about their dividend. The dividend is going to not only hurt the company long term but also shareholders.

While many companies have looked outside of fossil fuels, Exxon has spent the last two years trying to grow the oil and natural gas side and spent large sums doing so in a tough environment. The company pays out almost $15 billion in annual dividends. Cash flow from operations was $0 in Q2. I hope you can see why this is a disaster. The company has also suspended/delayed all work on its five main projects. Those include the Permian Basin shale, deepwater oil in Guyana and Brazil, and gas exports from Mozambique and Papua New Guinea. According to RBC analyst Pavel Molchanov, Exxon’s cash flow for the year covers 70% of its capital program and none of the dividend, which is being supported through the balance sheet. It doesn’t take a finance degree to see how this is problematic. The company is set to see its net debt as a percentage of capital top out at 27% by the end of the year. This would be the most since 1999 when Exxon merged with Mobil.

“While we see the dividend as safe – if for no other reason than management’s desire to maintain S&P Aristocrat status – the cash flow outspend is colossal under current conditions.” – RBC analyst Pavel Molchanov

I have to agree with Pavel on this one. I don’t think they will cut the dividend because they are already this deep in. I firmly believe they should have months ago, but here we are. Obviously, if oil continues to lag for another 6 months, they may have no choice. The company wants to continue to pay their dividend so badly that they are willing to cut their own people’s jobs first. While I understand this from an investment perspective, as a human being, I do not. I do not think Exxon has been fiscally responsible at all throughout the pandemic. This is part of the reason the company has been removed from the Dow Jones Industrial Index.

What Does Getting Pulled Off The Dow Mean?

By now everyone is aware that Exxon, Pfizer (PFE), and Raytheon (RTX) have been removed from the Dow Jones Industrial Index. The replacements? Salesforce.com (CRM), Amgen (AMGN), and Honeywell (HON).

This is big news, but what does it mean? Well…

“According to the WSJ Market Data Group, the average performance one year after being added to the Dow is minus 8%, while the return is almost flat — negative 0.6% — after ejection. The performance differential is especially notable more recently: The last five changes have seen a 3% rise for additions and a 43% rise for those stocks exiting.”

What I read into this, is that as the rotation occurs, it usually happens because certain stocks have been getting absolutely hammered, while others are flying high. Taking a look at Salesforce, the stock is up almost 70% on the year. As for Exxon, it is just over 40% to the negative.

The narrative is very similar to the other companies that have been added and removed respectfully. What you have to consider is if it is overbought/oversold. I do think that most of the damage of being removed is priced in, and maybe presenting a really nice buying opportunity, but more on that in a bit.

Exxon was the world’s largest company in 2013. There has no doubt been a shift in money flow for the time being, but I do believe energy will have another run, and therefore Exxon (like the company or not) will also run and likely outperform Salesforce over the next couple of years, which some may say is a bold prediction, but I feel comfortable saying that based on the data presented above even if this removal leaves a “black mark” on Exxon Mobil.

Taking a look at how the technical picture looks, we can see that it still isn’t very pretty, but we are nearing what could be a bottom. In my previous article “Exxon Mobil: Tread Carefully,” I outlined four levels I was watching very carefully. These four levels are shown below on today’s chart.

What we can see is that #2 (Blue) held up as resistance very well. #3 (Pink) also did not hold as support, and then very quickly became a source of resistance for most of July. We can see the stock got very choppy right around that level. All that leaves is #4 (Red).

Looking below, we can take a closer look as to where we stand right now. The stock continues to bleed a bit more than other oil stocks, which is due to being removed from the Dow Jones Industrial Index. When does the bleeding stop?

I am optimistic that the $38.82 level shown above will hold. This is essentially the last line of support saving the stock from going back down to the $31 mark. For this reason, it is crucial that this holds for longs. The stock looks due for a bounce.

As for how high, I think the levels outlined off the top are good short-term price targets. Looking a bit farther out, the stock needs to get back over the 200-day moving average. Looking below we can see just how badly the stock has been capped by it over the past year. If the stock can work its way back up, and break the moving average, it would be an incredibly bullish signal.

I do not have any position in the stock as of now; depending on how the stock bounces off the $38.82 level, I would consider going long, but I will let the price dictate my actions at this point. There are a lot of technical hurdles to overcome just yet.

As you can see, I am bullish on the industry as a whole, bearish on Exxon’s balance sheet, and undecided on the technicals. I do not see myself taking a long position in Exxon Mobil for some time. I see much more potential in other oil companies. However, there may be shorter-term swing plays at work here as the stock gets punished for its removal from the Dow Jones Industrial Index. At the end of the day, if you are just looking for a dividend, I would be cautious here. If the oil market doesn’t get back to where it was a year ago, they might have no choice but to cut. If you are bullish on oil, it might be a good bet. The stock will without a doubt increase as the price of oil does as well. Stay safe out there!