Exelon Corporation (EXC) is a holding company for four regulated utilities operating in Chicago and the Mid-Atlantic region (ComEd, PECO, BGE, and PHI) as well as a Generation business consisting primarily of nuclear plants. The company is by far the cleanest major electrical generator in the US and produces 12% of all low-CO2 electricity in the country. 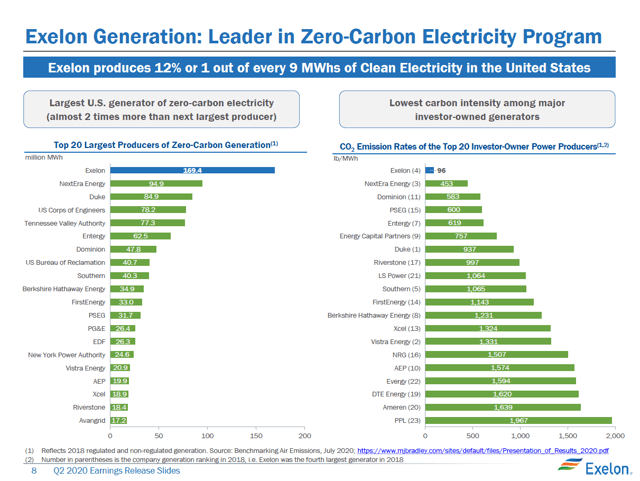 Exelon delivered a strong 2Q despite COVID-19, earning $0.55 per share compared to their last guidance of $0.35-$0.45/share. At the regulated utilities, electric deliveries were down around 7% on average driven by commercial and industrial customers even as residential power usage increased with more people staying at home. Costs were lower, particularly operations and maintenance costs at Generation. The nuclear plants ran well with a capacity factor of 95.4% and zero non-refueling outage days. Despite the earnings beat in 2Q, Exelon left full year EPS guidance unchanged at $2.80-$3.10. 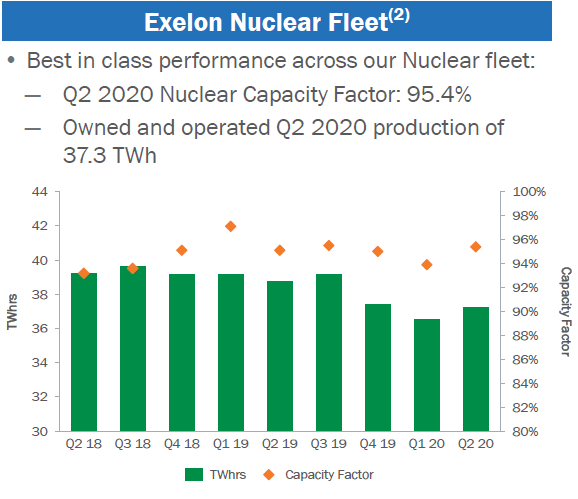 Also in the quarter, Exelon settled its federal bribery case with the Department of Justice. This case arose from ComEd’s lobbying practices in the state of Illinois. Exelon agreed to a deferred prosecution agreement and paid a $200 million fine. This amounted to $0.20 per share and was not counted in non-GAAP earnings. While it is a relief that the company has resolved this issue, Exelon still has to work with regulators and state governments where they operate, and the Illinois case could create some trust issues going forward. Exelon has historically maintained a good relationship with these entities, so there could be new political risk for the company when they negotiate rate agreements and look for subsidies for their nuclear plants.

As I mentioned last year in my article, “Exelon – Riskier Than Your Average Utility”, I discussed how Exelon has been successful at convincing state regulators to subsidize their nuclear plants through the use of Zero Emission Credits, or ZEC’s. First Energy (FE) was also successful at obtaining similar subsidies in Ohio, although it resulted in the Speaker of the Ohio House of Representatives getting indicted for bribery. No charges have been announced yet against First Energy. Although Exelon’s recent legal troubles involved similar conduct between ComEd and The Illinois House Speaker, it did not appear to have anything to do with the nuclear subsidies.

As I further discussed last year, even though Exelon’s Illinois nuclear plants benefit from the ZEC’s, there were complications that prevented these plants from supplying the PJM capacity market. As a refresher course, PJM is the grid operator in much of Exelon’s territory, and the capacity market is an agreement with plants to provide power when needed during periods of high demand to keep the grid stable. Plants compete to offer this capacity at regular auctions. Exelon’s problem was that the Federal Energy Regulatory Commission (FERC) required PJM to establish a Minimum Offer Price Rule (MOPR) intended to keep plants who receive state subsidies from setting their offer price in the capacity auction below a minimum level. The practical implication of this rule is that lower-cost natural gas plants are able to offer their capacity at a lower price than a nuclear plant and therefore the nuclear plant’s capacity offer is not accepted in the auction.

Exelon has been unable to get the FERC to change their MOPR rule, so they have been lobbying the state of Illinois to establish a “Fixed Resource Requirement” or FRR that would require the capacity market to take a fixed percentage of nuclear power. This law is controversial and subject to others lobbying against it. Debate in the state legislature has also been delayed by COVID-19. As a result, this issue is still unresolved and may result in PJM conducting its capacity auction under the rules that will shut out several of Exelon’s plants. CEO Chris Crane addressed this on the earnings call:

So, we’re still working to engage with stakeholders on a capacity market redesign. It’s very critical for us to get it done. As you know, PJM is going to run an auction. And there’s a strong sense from our analytic folks that the — some of the nuclear units are not going to be picked up in that auction. Some are uneconomic at this point right now and some more may become uneconomic.

And our commitment to you has always been if we can’t find a way or path to profitability, we’ll have to shut them down, which is a sad turn of events that will affect the state’s goals on carbon reduction, it will severely affect the communities around the plants and the very high paying, critical jobs that those communities benefit from.

Crane also mentioned that because of the ComEd legal issues “trust has been eroded”. As a result Exelon may need to lobby harder than usual to get the FRR approved, with no guarantee that it will, resulting in possible shutdown of some nuclear plants. The relationship also factors in to the rate setting process. ComEd currently has a rate formula which bases ComEd’s allowable rate of return on US Treasury yields. With those interest rates near zero, ComEd would obviously like to move away from this formula rate mechanism to a more traditional rate negotiation.

Exelon is a 50.01% owner of three plants: R.E. Ginna and Nine Mile Point in New York and Calvert Cliffs in Maryland. The remaining interest in these plants is held by French electric company EDF (OTCPK:ECIFY) who also had a put option to sell their stake to Exelon between 1/1/2016 and 6/30/2022. EDF chose to exercise this option in 2019, so Exelon will be taking full control of these plants once a price is negotiated and regulatory approval is received. There was some discussion on the earnings call about whether Exelon would need to issue equity to finance this transaction as they could be approaching credit downgrade triggers with the rating agencies. Management insisted that there was no equity issuance in the plan this year, but since this deal could take longer than a year to close, investors should be alert to the possibility of future dilution. 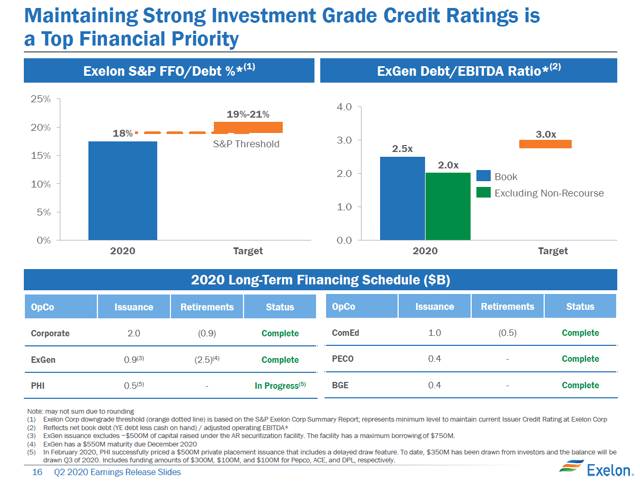 Finally, there was a question on the earnings call on whether Exelon would ever consider spinning off Generation. It was interesting that management did not rule it out, even though Generation is a key source of cash flow to fund capex at Exelon’s regulated utilities. As I touched on last year, Exelon’s valuation appears to be weighed down by Generation compared to other utility companies that focus more on transmission and distribution. Since then, Exelon’s valuation discount has grown versus some of these companies. The low valuations appear excessive compared to Exelon’s return on equity, assets, and total capital. Note that ROE and ROA are on the low end relative to peers, but not by much. ROC is in the middle of its peer group.

Exelon remains an excellent operator of its plants and regulated utilities. The bribery settlement within the company’s ComEd unit removes many legal risks, but the loss of trust with the regulators could be an issue when it comes to influencing rule-making on the PJM capacity market and rate setting. The market seems to be penalizing Exelon for its weighting toward Generation even as the company will be adding 50% of three plants to its balance sheet. The regulated utilities might receive a better valuation if Exelon could spin off Generation but I would not count on that as a catalyst to move the stock price.

Exelon stock has been trading sideways in the $35-$40 range since the pandemic, down from the $45-$50 range it was in before. Its dividend yield is in the middle of peers despite its cheapness on other valuation metrics, suggesting to me there is room to fall on any negative news. Positive catalysts that could move the stock are a resolution to the PJM capacity auction rules or a new rate case for ComEd that eliminates the benchmark to US Treasury yields. I remain long EXC but would not add here.

Disclosure: I am/we are long EXC. I wrote this article myself, and it expresses my own opinions. I am not receiving compensation for it (other than from Seeking Alpha). I have no business relationship with any company whose stock is mentioned in this article.