EXD: Breaking Away From Its Peers (NYSE:EXD)

We’ve covered the policy change of the Eaton Vance Tax-Managed Buy-Write Strategy Fund (EXD) in the past. So, we don’t have to go into the details of how different it was before this. We’ve been keeping steady updates on EXD along the way as well. Generally, we see that the net asset value of the fund follows a similar trajectory, as expected after the policy shift. However, this is starting to change with EXD starting to outperform these two others. I believe substantially too. At the same time, it remains the best value amongst the three U.S. large-cap tech-tilted option-based Eaton Vance funds.

EXD’s strategy is to “invest in a diversified portfolio of common stocks and writes call options on one or more U.S. indices on a substantial portion of the value of its common stock portfolio to seek to generate current earnings from the option premium. The Fund’s portfolio managers use the adviser’s and sub-advisers internal research and proprietary modeling techniques in making investment decisions. The Fund evaluates returns on an after-tax basis and seeks to minimize and defer federal income taxes incurred by shareholders in connection with their investment in the Fund.”

For ETV and ETB, it is just simply a copy-paste. So we know that all three funds invest in a similar diversified manner and write call options against indexes.

Here is some of the other basic info from their last “Equity Option Fund Quick Reference Guide” that pertains to these three funds. I’ll also include other relevant data for a better basic comparison

The tech weighting shown here is questionable for ETV, we discuss this later in the article.

I believe the most notable difference here is that the fund is significantly smaller than the other two. This can add to risk overall as larger investors might be prohibited from taking meaningful positions. The average volume is 34k. That is plenty for most retail investors, but if you are hoping to own 10k or more shares you could be looking at a situation where it would be tough to unwind a full position at once. Although, if you are a more buy and hold type investor, and don’t plan on selling during panics – that is a different story and you can probably tolerate lower liquidity.

Additionally, we see that they list the benchmarks, with ETB excluding the NASDAQ 100 benchmark. I don’t believe it is realistic to think of these benchmarks in terms of them actually outperforming them; but rather that they are highlighted and noted that they will write call options against those indexes. A call writing fund of any kind will typically underperform a non-call writing benchmark due to the market bias to go up over time. At the same time, positions being either called away in the call writing process or losses that could potentially be generated to the cash-settled options.

The other most notable thing is the discount that EXD is exhibiting in relation to the others. I say this every time, but it is certainly just unwarranted. Below is a chart of the discount/premium from February 8th, 2019 to today.

All three funds recently made sharp moves higher, along with the broader market.

We can see that all funds took a severe hit (buying opportunity!) in March’s market collapse this year. Since a sharp recovery, we have drifted downward in the discount/premium directions for all three. However, EXD remains the cheapest option.

Performance – And The Winner Is…

I get it, when you look at the long-term history of EXD it has continually eroded assets in a dramatic downward fashion. That has happened even in the last bull market that was the longest ever! However, as you’ve probably assumed I will mention – the fund is completely different now since 2019. I’m not sure why it remains penalized but for the simple fact that people don’t realize it. 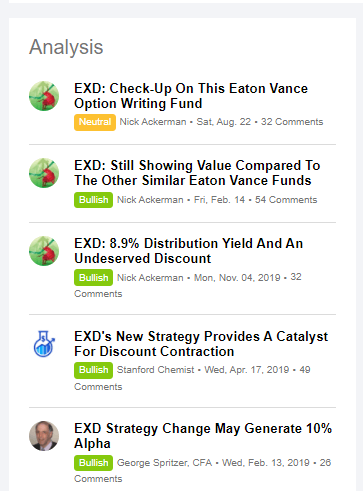 They must not be reading enough Seeking Alpha!

What is the most interesting since our last coverage is that EXD is continuing its outperformance. We noted that it was starting to slightly outperform the others in our last piece. It does have a heavier tech position to ETB but is quite a similar weighting to ETV. 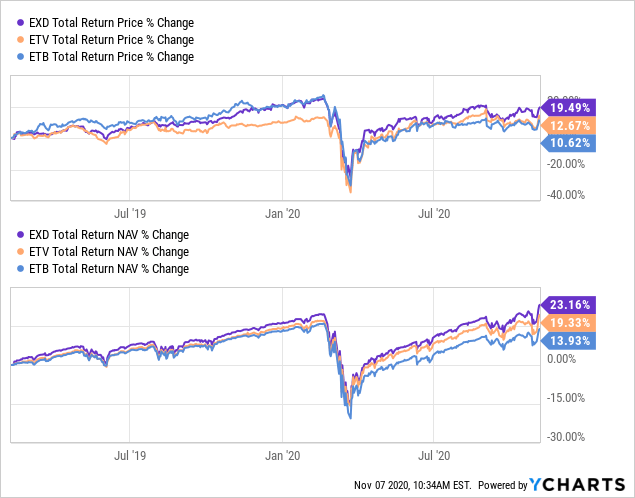 Not only that it is maintaining its NAV and share price total return lead, but starting to gain steam too. Previously, the NAV total return percentage differential was 3.31% for EXD to ETV, and EXD to ETB was a whopping 7.46%. Overall returns have continued to ticker higher for all three, which is great to see. The percentage differential as we can see now has ticked wider to 3.83% between EXD and ETV. For EXD and ETB, the pace between the divergence has picked up to a differential of 9.23%. Of course, this does have a lot to do with the overweight in tech that both EXD and ETV have.

The last time we updated on EXD, it was at a discount of 4.97%. That put the fund at a ‘Hold’ level. Well, now the other funds are still in the ‘Hold’ range but EXD slipped back into the ‘Buy’ range with the latest downdraft.

If we go back above to the basic info, you can also note that EXD has the highest expense ratio. Due to the smaller size and some of the same fixed-cost expenses, this can happen. However, as we just got done discussing that hasn’t hurt its returns as it outperforms. Another reminder that sometimes, it isn’t all about the lowest fee possible. Though it helps that it isn’t an egregious fee in the first place.

Distribution – EXD Has The Best Coverage, Too*

When we typically think of distribution coverage, it is more accurately reflected as coverage from net investment income. However, I put an asterisk in this subheading to draw attention to the fact that all three of these funds will rely on capital gains or return of capital to fund their distribution.

Suffice it to say, relying on capital gains means that the fund with the highest total return is going to have the best coverage. That is, in terms of being able to maintain the same distribution being paid out. This is another positive for EXD due to the larger discount. On the NAV level, they have to earn 8.26% to pay the current rate. For ETV this is 9.48% and for ETB they have to earn 9.22%.

We can still look at the more traditional metric of NII coverage though. For EXD, their last report ending June 30th, 2020, comes to 4%. ETV’s NII coverage comes to 5.6% and ETB is the highest NII coverage at 10%. We know that lower coverage is natural with heavy tech portfolios. That makes sense that EXD and ETV would have lower NII coverage. The small discrepancy between EXD and ETV just comes down to, of course, having different portfolios and allocations.

EXD comes to 10.49%, 8.93%, 8.10% and 3.26%, respectively. This is a considerable difference as ETV’s top 4 constitutes an astounding 63.36% of assets. EXD is overweight these names too, but not nearly to the same extreme at 30.78%. This is nearly half the allocation. At the same time, ETV ultimately has more overall positions held at 166 according to their last update. ETB had 139 in that same update.

This was a massive change for ETV as well, as the portfolio was much closer to a representation of EXD’s. When they reported on June 30th, 2020 MSFT was 9.4%, AAPL at 9.3%, AMZN at 7.9% and FB at 3.8%. I’m not sure why the massive and drastic change, but it is something to watch. That is also why above I only included tech weighting as they reported it in their Semi-Annual Report.

EXD would remain my go-to Eaton Vance fund that invests in mostly large-cap U.S. names, with a tilt towards tech. This is primarily due to the fact that the fund’s discount remains unreasonably large in comparison to the other similar EV funds. Yet, it is outperforming and picking up steam since its policy shift on February 8th, 2019. The main drawback remains that large investors might not feel comfortable with such a small fund – and for good reason if they are the type of investor that needs to sell during panics.

I believe that EXD remains the strongest candidate of these three. However, some investors may choose to invest in ETB due to less concentration in tech. Leaving the investor better-diversified overall in the end. That being said, the discount certainly isn’t at a valuation that makes it as interesting as EXD. It is a bit shocking how concentrated ETV’s holdings have become. I would consider that fund most precarious for portfolio concentration risk – especially as it is the one at a premium level.

Disclosure: I am/we are long EXD, MSFT. I wrote this article myself, and it expresses my own opinions. I am not receiving compensation for it (other than from Seeking Alpha). I have no business relationship with any company whose stock is mentioned in this article.

Additional disclosure: This article was originally published to members of the CEF/ETF Income Laboratory on November 7th, 2020.