Ex-officer charged in connection with killing of Breonna Taylor

A grand jury has indicted one of the three police officers involved in the shooting of Breonna Taylor, a black woman whose death in Louisville, Kentucky, became a rallying cry in anti-racism protests across the US.

Former detective Brett Hankison faces three counts of wanton endangerment, which carries a potential prison term of up to five years. The court set his bond at $15,000.

Detective Myles Cosgrove and Sergeant Jonathan Mattingly, who also fired their weapons that night, were not indicted. The Louisville police department has fired Mr Hankinson and placed Mr Cosgrove and Mr Mattingly on administrative leave.

Mr Fischer also declared a curfew from 9:30pm until 6:30am, starting on Wednesday and lasting for 72 hours.

“I urge everyone to commit once again to a peaceful, lawful response, like we’ve seen here for the majority of the past four months,” he said. “I ask that we, all of us, keep that critical focus on the need for racial justice and reimagining public safety so we can all move forward as a city.” 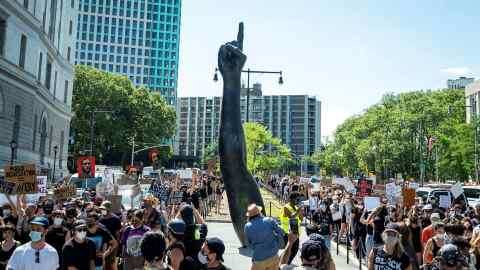 Taylor was shot in her apartment on March 13, after police officers burst in at night. The officers, who had a no-knock warrant, traded gunfire with her boyfriend as they entered the apartment.

Taylor’s death, along with that of George Floyd, have become a focal point at protests for racial justice that have swept cities across the US this summer. Protesters chanted it as part of the “Say Her Name” campaign meant to highlight violence against black women.

Taylor’s family filed a wrongful-death lawsuit against the city. Officials said on September 15 that Louisville would pay a $12m settlement while also enacting reforms, including having commanding officers sign off on search warrant applications, improving tracking of complaints against police officers, and including social workers on calls to assist the mentally ill.