Anthony Levandowski, co-founder of Google’s self-driving car project, has been sentenced to 18 months in prison for stealing trade secrets and allegedly using them to help build a rival driverless programme at Uber, which he is now suing for $4bn.

Mr Levandowski, who had pleaded guilty to one of the 33 counts against him in March, will not go to prison right away because of coronavirus concerns.

He has previously called prison time a “death sentence” because of Covid-19, after prosecutors had earlier recommended a sentence of 24-30 months.

Judge William Alsup has ordered him to be under house arrest until his sentence can begin, describing his actions as “the biggest trade secret crime I have ever seen”.

Before Tuesday’s sentencing, Mr Levandowski in a letter apologised for his actions and appealed, unsuccessfully, for a more lenient sentence that would allow him to continue working on his new autonomous technology company, Pronto AI.

“Although the guilt and shame continue to fester and eat away at my conscience, I am working every day to earn my salvation in this world,” he wrote.

Mr Levandowski added: “The technology that we’re developing at Pronto is entirely homegrown, made here in San Francisco by a team who is aware of my past mistakes, gleans lessons from those mistakes, and puts rigorous compliance and safety measures at the forefront of its operations.”

But prosecutors had argued that the trade secret theft “shook an entire industry”, driven by a desire “to be seen as the singular inventor of the self-driving car, the way Alexander Graham Bell is credited with inventing the telephone”.

The former Google engineer was one of the founders of its self-driving project, now known as Waymo, and was widely regarded as a pioneer in the development of autonomous technology. He left in 2016 to start a rival self-driving company called Otto, which Uber swiftly acquired for almost $700m.

In February Mr Levandowski filed for bankruptcy after a court ordered him to pay Google $179m. During his time at Google he had earned $127m, according to court documents.

“Through sentencing in this matter, the court has an opportunity to shape behaviour,” the prosecution argued in court documents. “A substantial prison sentence will deter future thefts, while a non-custodial sentence will encourage them.”

Separately, new documents reveal that Mr Levandowski sued Uber for $4bn in mid-July. He alleged that Uber failed to adhere to an indemnification agreement with him and that its actions “coerced” him into resigning from Otto and selling his stake “at a significant discount”. 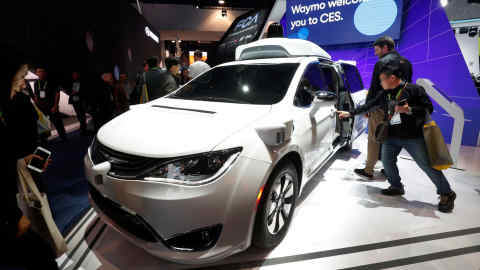 The 41-page suit said that when Uber expressed interest in buying Otto in 2016, Mr Levandowski “insisted that Uber indemnify him against any claims brought by Google” because of “known hostility towards Uber” by Larry Page, Google’s then-chief executive.

Also, Mr Levandowski claimed that when Uber worked out a settlement with Waymo, the terms included that Uber “would never hire or work with Mr Levandowski again, which resulted in Uber also reneging on its promises to support Mr Levandowski’s trucking business”.

Uber has argued that it was no longer bound to the agreement because Mr Levandowski engaged in fraud and has pled guilty to trade secrets theft. However, Mr Levandowski said “Uber was aware” of his conduct, including the details of the one file he admitted to accessing.

Uber declined to comment on either the lawsuit or Mr Levandowski’s sentencing.