The iShares MSCI South Korea ETF (NYSEARCA:EWY) enables investors, predominantly U.S. investors, to purchase targeted exposure to large- and mid-sized companies in South Korea. Listed on the NYSE Arca exchange, the price of EWF shares is denominated in U.S. dollars. EWF’s portfolio is wholly concentrated in South Korea (excluding the fund’s minor cash and/or derivatives balance). The expense ratio of the fund is 0.59%; while more expensive than popular U.S. trackers, this expense ratio is reasonable for funds of this nature.

South Korea is not the most obvious place to invest. The geographically challenged among us might even struggle to find the country on a map. Yet South Korean export and trade data has historically been used as a leading indicator of the global economy. Informed investors have looked to South Korea for indications of cyclical turns in the global macro economy, even if not to invest in South Korea itself.

International trade is important to South Korea. Since the turn of the century, South Korea’s current account has been positive on an annual basis, fluctuating between 0.3% and 7.7% of the country’s GDP (on average: just over 3%).

The most recent annual reading for 2019 was 3.7%. The chart above illustrates how this ratio fell from 2004 into the 2008/09 crisis. We can also see that “this time around” that the ratio had already been falling since 2015. This year has been marked by one of the worst global economic contractions in history, no doubt largely brought about by the COVID-19 pandemic. However, based on the 2004-2008 lag time of the “indicator” above (the South Korean current account), we were perhaps due for a recession from 2019.

South Korea is essentially a beneficiary of globalization. When the world economy is healthy, South Korea is expected to benefit disproportionately. One might expect the opposite to be true, and yet South Korea has managed to outperform through more difficult periods too. For example, as illustrated by the chart below, the annual GDP growth rate in South Korea has outperformed the United States, not just through this year but also through 2008/09. 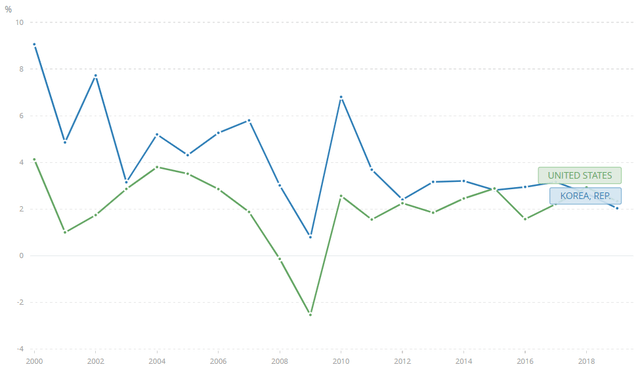 The meteoric rise in the economic significance of China this century has supported South Korea’s standing and performance. Key export destinations include China (the largest consumer of South Korean exports, at 25.9% in 2018) while other countries in the Asia-Pacific region have also helped to propel the South Korean economy forward. These include Vietnam, Hong Kong, Japan, and also to the West, the United States. 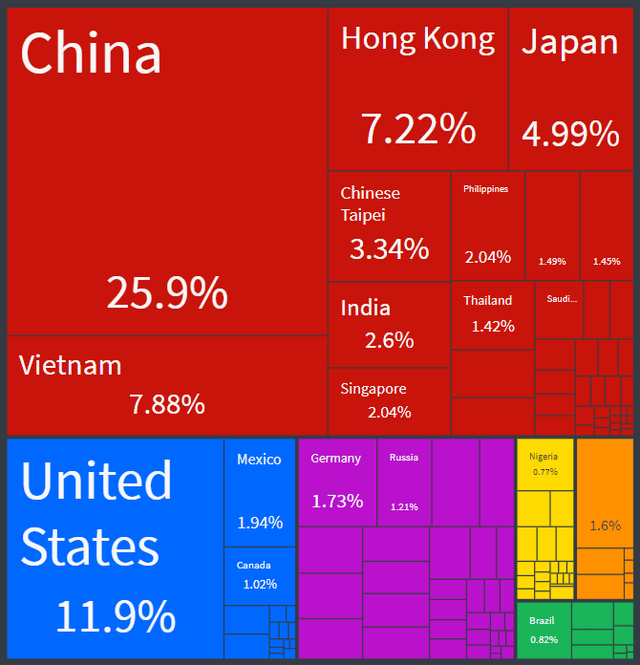 The South Korean economy is sophisticated too. As ranked by the Organization of Economic Complexity (the source of the chart above, as referenced), South Korea ranks 5 out of 137 countries. Key products include integrated circuits, machinery, broadcasting equipment, cars, vehicle parts, passenger and cargo ships, refined petroleum, LCDs; the list is long and frankly impressive.

EWY, for reference, is heavily invested in Information Technology (34.85%), Consumer Discretionary (11.92%), and Financials (10.11%). Other key sectors include Materials, Communication, Industrials, Health Care, and Consumer Staples. EWY is actually rather nicely diversified, although there is admittedly a fair amount of concentration in technology and Consumer Discretionary. Still, if one wishes to bet on a global economic rebound (which is indeed a rather good bet in the long term), EWY’s sector concentrations seem attractive. 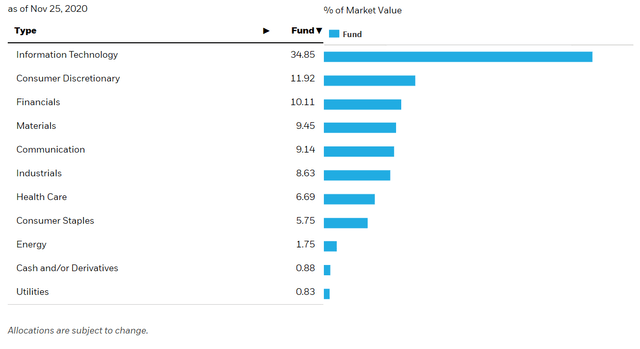 Technology tends to do well early on in the business cycle and even throughout while global growth is positive and risk sentiment generally remains in positive territory. Consumer Discretionary stocks also tend to outperform Staples during global economic rebounds, as consumer confidence returns. South Korea’s key export partners being largely based in Asia-Pacific also strengthens the case for funds such as EWY; that is, considering China has managed to avert a significant fall in GDP this year (indeed, year-over-year growth was positive at 4.9% in Q3 2020).

South Korea is a manufacturing beast and well-positioned geographically and politically. While South Korea has historically been viewed as an emerging market, this view is becoming increasingly difficult to justify. If we look at GDP per capita (adjusted for Purchasing Power Parity), we can see that South Korea is not too far away from the United Kingdom, and the gap has been gradually closing. 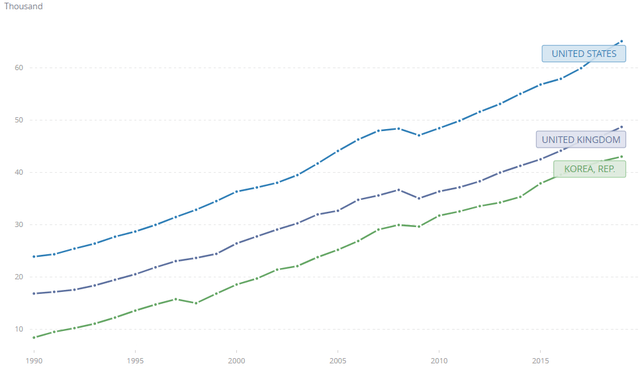 South Korea, at least in my opinion, deserves to be considered a developed economy. Further, the country demonstrates the potential to outperform slower-growth nations, including the West (in turn, including both Europe and the United States).

KRW (the South Korean won) has also managed to avert a significant sell-off this year against major currencies. The won is up against the U.S. dollar, though modestly down against the euro. Strong economic resilience, coupled with relative political stability and a positive current account, would conventionally lend support to a country’s “safe-haven” status in the FX world. Yet unlike Japan (whose yen is conventionally considered a safe haven for these reasons), South Korea is fast-growing. Japan has been plagued by low inflation, low interest rates, and low growth for years, not South Korea.

KRW/USD and KRW/EUR are pictured above, although these crosses are typically presented as USD/KRW and EUR/KRW. The current rate for USD/KRW is 1,104 (as of the close of November 27, 2020) as compared to the price at the start of 2020 of 1,154 (i.e., USD is over 4% weaker YTD). Could KRW strengthen further? In the chart below, I use the OECD’s PPP model to estimate the fair value of USD/KRW through 2019 (the latest data point).

Fair value, per this model, was estimated at circa 860 in 2019. The chart reveals that USD/KRW has generally languished following the past two significant U.S. recessions this century (after an initial spike, which has possibly already occurred this year, through March 2020). The two recessions I refer to were in the early 2000s and the Great Recession of 2008/09. While we are here, it is worth additionally exploring EUR/KRW, using the same model.

We can see that EUR/KRW is likely trading at close to fair value, although one might suspect that the tailwind here is still in favor of further KRW strength (i.e., EUR/KRW weakness). That is especially true provided that South Korea does indeed continue to outperform generally low real growth in Europe (which has been mired by negative rates for years, even pre-pandemic).

READ ALSO  The Hottest Product At CES Is A Doggy Door

For good measure, an alternative PPP model is the Big Mac Index (by The Economist). This model looks at the price of a homogenous product in different geographies, a McDonald’s Big Mac, and uses this single price to gauge where the currencies in question “should” be trading by implication. The raw index suggests that the won is undervalued by 34% against USD per the July 2020 index value and 22% undervalued against EUR. The Economist also adjusts for GDP per capita, which helps to reflect differences in local purchasing power. Adjusted valuations still place the won at discounts to the USD and EUR of 15% and 16%, respectively (compared to our OECD model of 22% and 35%).

In short, the won is probably undervalued on the basis of purchasing power parity. EWY could therefore stand to further benefit U.S. shareholders, as there is possibly an FX tailwind to enjoy over the coming months and years. With EWY’s exposure to sectors that are likely to outperform early on in the cycle, and with South Korea likely to continue to outperform (with their technological sophistication placing to benefit not only from further Chinese GDP growth but also from the increasingly “tech-enabled” world, via exports), EWY looks attractive from an international perspective.

The 12-month trailing yield is also circa 2%. With dividends reinvested, the fund is well-positioned to outperform more conventional equity trackers. At the very least, EWY presents an appealing option to achieve further international diversification within a wider equity portfolio.

As shown in the chart below, EWY has outperformed SPDR S&P 500 ETF (NYSEARCA:SPY) this year (the latter being a popular U.S. equity tracker). This is illustrated by the shaded box. However, since mid-2011, EWY has underperformed SPY. From 2020, we might possibly be looking at a turn of this possibly cyclical relationship.