Earlier this month we made the case for leveraged long positions in U.K. stocks due to depressed valuations, a relatively high dividend yield, and widespread bearishness towards the index. After seeing double-digit gains in the iShares MSCI United Kingdom ETF (EWU) since then, higher highs and higher lows have been established, and we are confident that the bull market which began in March should continue over the coming months and years as revenues recover.

All The Signs Of A Technical Bull Market

The recent low for the EWU occurred on October 29 when expectations of a second lockdown were widespread. The fact that the market managed to recover despite deteriorating near-term economic prospects is a very positive technical signal that all the bad news has already been priced in.

The Pfizer (NYSE:PFE) vaccine news which came out on November 9 provided the catalyst for an upside break of the downtrend in place since June, and subsequent gains have seen the EWU post higher highs. Healthy bull markets tend to be characterised by strong market breadth and it is, therefore, a positive sign that over 80% of the FTSE 100’s individual components are trading above their 200-dma. In technical analysis terms, the vaccine-triggered gap looks much more like a breakout gap rather than an exhaustion gap.

Another positive technical signal is that HSBC (NYSE:HSBC), the index’s former main constituent, actually bottomed out over a month ago. Just 7 months ago HSBC represented almost 8% of the EWU, with this figure falling below 4% at its September 25 low. With this crucial stock regaining its footing after testing its global financial crisis-low is a positive technical signal.

Ideally Placed For A Value Comeback

EWU has been one of the best-performing developed country ETFs over the past month, with the beaten-down value sectors seeing a huge bid as investors rotated out of growth and momentum stocks globally. As we mentioned in early September (see ‘FTSE Vs. NDX: Huge Value/Growth Reversal Ahead‘) BP (NYSE:BP), Shell (NYSE:RDS.A) (NYSE:RDS.B), and HSBC had at the time been responsible for 78% of the EWU’s YTD decline. Since the recent low, these three stocks have made up roughly 20% of the entire index’s rise.

If the global recovery in value stocks has further to run, as we believe is the case, then EWU is very well-placed given the relatively high weighting of financials and energy. Not only have value stocks outperformed globally over the past month, but U.K. value stocks have also outperformed within the value space.

Despite the recent gains, the EWU remains among the cheapest major markets in the world, particularly when compared with other countries with similarly strong corporate governance credentials. The chart below shows the performance of the price-to-sales ratios of the world’s major developed market indices over the past 20 years, with the U.K. underperforming to a huge extent.

Price/Sales Ratios Rebased to 2000: U.K. The Bottom Of The Pile

It is tempting to think that this decline is justified by the deteriorating outlook for the energy and financial sectors as well as the U.K. economy. Investors are underweight U.K. stocks in anticipation of continued revenue declines which will keep profits depressed and ultimately undermine dividend payments and/or buybacks.

Revenue Comeback On Its Way

However, when comparing the forward dividend yields of these indices, the U.K. ranks top of the list despite the ongoing decline in dividends, which have followed the drop in revenues. The current forward dividend yield is more than double the U.S. and roughly 50% higher than the major developed market average.

Forward Dividend Yields: U.K. The Best Of A Bad Bunch

As we noted earlier this month, revenues are highly likely to rebound strongly over the coming quarters owing to a cyclical recovery in the U.K. economy as lockdowns ease and energy sector revenues rebound rapidly owing to the recent recovery in crude oil. The relatively high weighting of the materials sector (currently just over 11%) should also benefit from the ongoing recovery in industrial metals prices. A recovery in sales should enable a surge in profits and dividends. As the chart below shows, the current U.K. dividend yield is consistent with double-digit returns over the next decade. 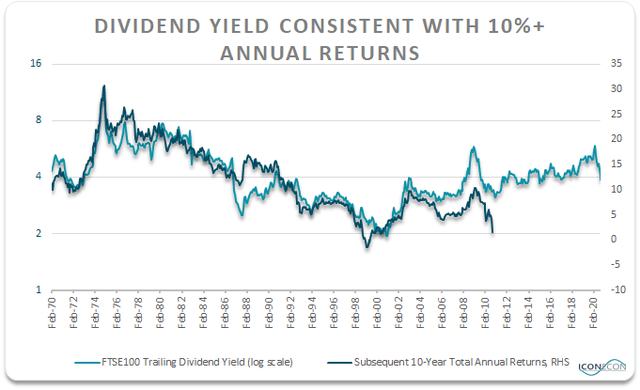 Pound Could Provide A Tailwind Despite Deeply Negative Real Yields

One of the reasons we recommended leveraged long positions in U.K. stocks earlier this month is the ultra-low level of U.K. real bond yields; the difference between 10-year bond yields and 10-year breakeven inflation expectations. The U.K. stands alone as having the most negative real yields in the world on this metric. While this should provide a long-term tailwind to stocks in local currency terms, it should also be expected to undermine the pound over the long term. However, the good news for dollar-based investors is that the pound is undervalued in real effective terms and appears to be forming a long-term base. Upside mean reversion in real terms would allow pound strength to provide additional support to EWU returns over the coming years.

GBP Real Effective Exchange Rate: Undervalued And Forming A Base

Disclosure: I am/we are long EWU. I wrote this article myself, and it expresses my own opinions. I am not receiving compensation for it (other than from Seeking Alpha). I have no business relationship with any company whose stock is mentioned in this article.