EWA: A Contentious Aussie-China Relationship Will Be A Headwind (NYSEARCA:EWA)

The purpose of this article is to evaluate the iShares MSCI Australia ETF (EWA) as an investment option at its current market price. I have held a neutral outlook on EWA for a while, and that outlook continues today. While the Australian government is pushing forward infrastructure plans to spur economic growth, and the Reserve Bank of Australia is keeping interest rates at record low levels, I see too many headwinds to bank on those stimulus measures. One, there have been broad dividend cuts and suspensions across the continent, pushing EWA’s yield down in the short-term. Two, Australia’s stock market has been lagging the U.S., but also other economies in the South East, which makes me reluctant to recommend EWA. Three, and most importantly, Australia and China are seeing their relationship sour right now, primarily driven by concerns of China’s handling of the Covid-19 outbreak. With Australia heavily reliant on Chinese tourism and export buying, it will be difficult for the country to navigate this geo-political risk.

First, a little background on EWA. The fund is managed by BlackRock (BLK), and its objective is to “track the investment results of an index composed of Australian equities”. Currently, EWA trades at $19.46/share and yields 3.82% annually, paying semi-annual distributions. I covered EWA in late February, as the sell-off was getting underway. At the time, I expected EWA to hold up reasonably well, but saw little chance of out-performance, leading me to place a neutral rating on the fund. In hindsight, this was a reasonable call, although perhaps not bearish enough, as EWA saw a sharp drop in March. However, we have seen a subsequent recovery, and EWA is down only about 2% since that review, however, it has notably under-performed the broader U.S. market: 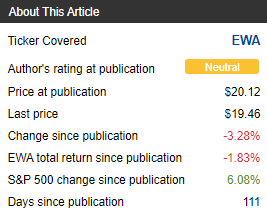 As we approach the beginning of the second half of the year, I wanted to take another look at EWA to see if I should change my outlook going forward. After review, I continue to see multiple headwinds facing the broader Australian economy, which makes me reluctant to recommend this fund. As such, I am maintaining my neutral outlook, and I will explain why below.

Australia Has Been A Laggard

To begin, I want to express a broader concern I have about buying in to EWA right now. Clearly, the fund is well off its high and, if an economic recovery takes hold and is sustained, the next move will likely be higher. Of course, that is assuming a lot, given how devastating the Covid-19 pandemic has been on the major global economies. However, governments around the world, including in Australia, have attacked this crisis with aggressive policy measures that could spur growth and inflation.

That said, while I see a scenario where Australian equities could indeed move higher, I am reluctant to put my cash to work in the continent. As I noted above, EWA has been under-performing the S&P 500, which is a longer term story. I see little reason to believe this trend will not continue, making me reluctant to pull money out of U.S. equities and in to EWA. Equally concerning, Australia has not just been lagging the U.S. market, but also its regional peers. For example, the benchmark indices of South Korea, Malaysia, and New Zealand have all come out of the sell-off seeing larger gains than Australia’s benchmark, as shown below: 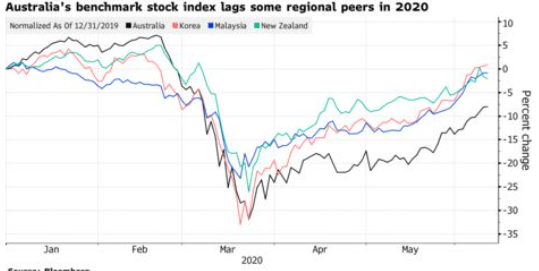 My point here is that while I am generally more optimistic on U.S. equities, I could entertain the argument that investors may consider EWA for geographic diversity. However, Australia has been a laggard compared to other markets in the region, telling me that investors may be wise to look beyond EWA and instead to other economies for that non-U.S. diversity. While this is simply past performance, the momentum is clearly against Australia, and I would need to see some compelling metrics to suggest a turnaround is forthcoming.

Dividend Story Is Quite Negative

As I noted above, I am not seeing a story that suggests EWA is ripe for out-performance. One of the metrics that particularly concerns me, especially as a “dividend seeker”, is the fund’s recent dividend payout. EWA pays semi-annual dividends, and its June ex-date just passed on the 15th. While it was predictable that this figure was going to come under pressure, I was surprised by the size of the drop, which is shown shown below:

Clearly, this is a very negative development. For investors in EWA, a strong dividend yield is normally a primary reason for owning the fund. EWA typically offers a much higher yield than the S&P 500, so as an income play it could look attractive. This above-average yield is often driven by the high dividends offered by Australia’s “Big 4” in the banking sector. EWA is heavily weighted in Financials, so their impact on the fund’s dividend is significant. In fact, Financials is the largest sector by weighting, at over 32% of total assets:

Clearly, the Financials sector is important for EWA’s overall performance. In recent times, this has not been a positive attribute, although the bank stocks have rallied over the past few months. Still, a difficult macro-environment presents itself. Specifically, there is a lack of public confidence in the banking sector, low interest rates are pressuring profits, and high unemployment is likely to take a toll on consumer loan and mortgage delinquency levels.

Given this reality, it is understandable that companies such as Westpac Banking Corporation (WBK) announced in May they would not be paying their June dividend. Similarly, Australia and New Zealand Banking Group Limited (OTCPK:ANZBY) also postponed their May dividend, with an update expected in August on whether or not that dividend will be made up. While these are just two examples, they have a direct impact on EWA, and the impact is disproportionate given their weighting within the fund. To illustrate, consider that both WBK and ANZBY are top holdings, combining to account for over 9% of total assets, as shown below:

As you can see, the banking sector’s challenges is a key reason why EWA delivered a dividend in June that was so much smaller than it was last year. Until the outlook becomes much clearer, I have to imagine the dividends within this sector are going to come in markedly lower than in previous years, if they come in at all. The end result is EWA’s attractiveness as a dividend play has been materially impacted.

Australia Needs China, But The Relationship Is Strained

I now want to shift to a broader outlook on Australia-China relations, which have been increasingly under pressure. While Australia, along with other Western democracies, have been critical of China’s human rights record, those concerns have typically taken a back seat to economic realities. Australia has enjoyed a major trade relationship with China, as the country is a major consumer of Australian exports. However, the Covid-19 pandemic has strained the relationship between the two countries. As Australia has been critical of China’s response to the virus, the Chinese have responded in kind. For its part, Australia has been vocal about calling for an independent inquiry into the origins and handling of Covid-19. Angered by the inherent implication, China has taken economic retaliations, such as suspending meat imports, raising tariffs on Australian farmers, and warning against travel to the country.

Further, the war of words continued in to this week. After Australian officials accused the Chinese government of spreading disinformation regarding the Covid-19 virus, the Chinese responded by calling the accusations “baseless” and “completely rubbish”, according to a report by The Guardian.

My point here was to emphasize that Australia and China are at a bit of a crossroads right now, by taking shots at each other in the press, and also by enacting anti-trade policies. While this is not unique to Australia, for the U.S. and the U.K. had also seen a similar story unfold, what is concerning for Australia is how reliant it is on China. This means the country will need to balance its desire to hold China accountable for its handling of Covid-19, while also protecting its own economic interests. And the stakes are high. To see why, consider the chart below, which shows Australia’s top trading partners: 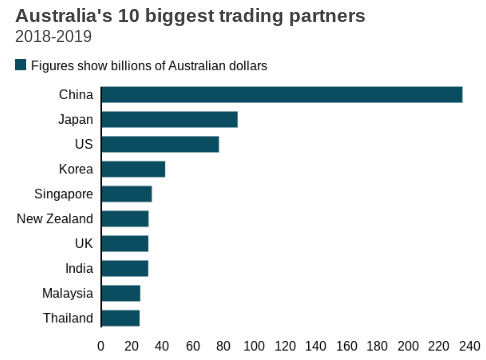 As you can see, China is by far Australia’s largest trading partner, which means a souring of their relationship could have major economic implications for the country.

And it is not just exports that are at risk. Australia’s relationship with China is broad and extensive. While China does import a large quantity of Australia’s diverse list of exports, such as barley, iron ore, and coal, the reliance on the Chinese populace extends well beyond that. For example, in terms of tourism, the Chinese spend more within Australia’s borders than any other country. In fact, Chinese expenditures are more than three times the second highest ranked country (the U.S.), according to industry research firm IBISWorld: 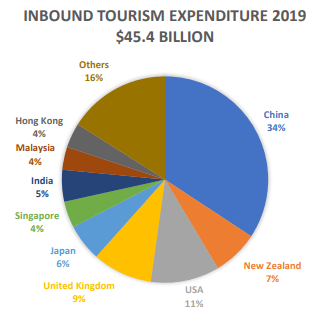 Similarly, Australia’s higher education sector is also heavily reliant on Chinese students. In fact, the Chinese make up more than one-quarter of the total number of international students in the country, and supply more than any other individual country, as shown below: 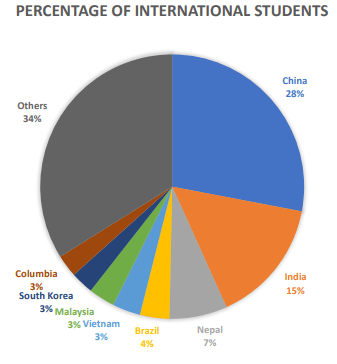 My takeaway here is Australia is clearly dependent on Chinese spending and travel to maintain its current economic position. A de-coupling with the Chinese will have massive implications, from exports, to tourism, to higher education. While trade partners can be replaced, Australia will have a hard time finding another partner who can fill this big of a void. With the geo-political rhetoric heating up between the two countries, I see negative implications down the line. This is a risk I prefer to avoid for now.

EWA has rallied in the short-term, but its longer term trend has not been impressive. While I considered this fund for non-U.S. exposure, along with an above-average dividend, I have generally found the risk-reward proposition unfavorable. Looking ahead, I believe there are better opportunities elsewhere, as Australia faces the Covid-19 pandemic, fallout from last year’s wildfires, and an increasingly hostile relationship with China, its top trading partner. Therefore, I am maintaining my neutral rating on the fund, and would recommend investors be very selective when initiating positions at this time.