Evo Morales’ man hopes to lead Bolivia out of chaos

Nine months after president Evo Morales fled Bolivia amid mass protests and cries of election fraud, the Andean country is once again in turmoil. Tens of thousands of people took to the streets this month angry at delays to a vote to replace Mr Morales and demanding the resignation of interim leader Jeanine Áñez.

Luis Arce, the frontrunner for the postponed presidential and legislative elections which will now take place in October, believes he has the answer to Bolivia’s woes. “The only political party which can guarantee social stability, political stability and economic stability is us,” he said in an interview with the Financial Times. “We have done it before and we are going to do it again.”

For his opponents, that is exactly the problem. The candidate for Mr Morales’ leftwing MAS party is the former president’s finance minister and chosen successor.

An economist from a middle-class family in Bolivia’s capital, La Paz, Mr Arce may not match his mentor’s charisma on the stump or his origins as an indigenous llama herder but he shares Mr Morales’ passion for state-directed policies which harness the country’s abundant reserves of metals and natural gas to help the poorest.

“Our economic model . . . has given us great satisfaction in the 14 years it was operating,” he said, ticking off a list of his party’s achievements in power: strong economic growth coupled with big reductions in poverty, unemployment and inequality. Critics say the global commodities boom flattered Bolivia and that natural resource-led development has had its day, but Mr Arce disagrees.

“The recovery of natural resources for our own benefit, the redistribution of the profits generated among all Bolivians, that will not change,” he said of his programme. What is new is greater industrialisation “with the clear objective of substituting imports”. Food, household products and steel are early priorities. A Bolivian-made electric car powered by local lithium batteries would follow.

Funding would come from two main sources: Mr Arce would ask international organisations such as the World Bank for two years of debt relief, saving $1.6bn. Another $400m would come from a wealth tax, underlining the party’s commitment to social justice.

“We were building a more equal society until the coup d’état came,” Mr Arce said, referring to the sudden departure of his boss after the army and police withdrew their support in the turbulent wake of last October’s election, when Mr Morales was seeking a fourth consecutive term.

Those bitterly disputed events have shaped the narrative of this year’s presidential campaign. For the left, Mr Morales was the victim of a military coup backed by the US. For Mr Morales’ opponents, his departure represented the long-overdue toppling of a tyrant and the chance for democratic elections.

Analysts say the transition has veered badly off track. Ms Áñez, a little-known conservative senator, quickly shed her caretaker role and set about trying to dismantle Mr Morales’ legacy. After pledging that her sole aim was to make way for fresh elections, she decided to run as a candidate herself, while launching a wave of prosecutions against her political opponents in the MAS.

“What could have been an extremely productive transition has become very problematic,” said Eduardo Gamarra, a Bolivian political expert at Florida International University. “Bolivia has essentially blown the transition.”

Making matters worse is the coronavirus pandemic, which prompted two delays to the election date this year as Bolivia suffered one of the world’s worst death tolls, according to a New York times analysis of excess deaths.

Ms Áñez’s unelected interim government has won few friends for its chaotic handling of the crisis. 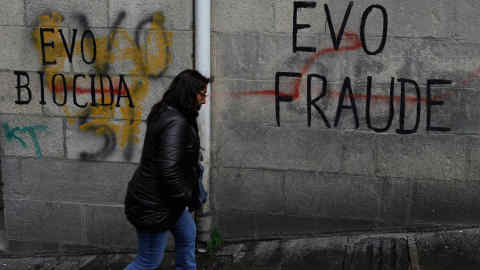 Her health minister was arrested after allegations of corruption linked to the purchase of ventilators. Uncollected bodies piled up in the streets of some cities as morgues were overwhelmed. Doctors said the recent blockades of highways by protesters prevented oxygen supplies from reaching some hospitals, prompting alarm at the Organisation of American States.

Mr Arce dismissed as a lie suggestions that the MAS was behind the blockades, saying he had warned international mediators repeatedly that Bolivians would not accept another election delay. “They have left us nine months without democracy,” he said. “Those countries which have intervened in this period of pacification . . . have a moral obligation to give us back democracy as soon as possible.”

With Ms Áñez’s popularity waning, analysts say she is coming under pressure to step down and help unify the opposition. So Mr Arce’s real challenge will be to beat Carlos Mesa, the centrist who was the main challenger to Mr Morales last year and is a close second in the polls.

Mr Arce insists he will win on the first round. But it will not be plain sailing. The street protests which paralysed Bolivia this month may have hurt the MAS. Many Bolivians believe that as president, Mr Arce would be Mr Morales’ cipher.

“Arce is intelligent, competent and the architect of some of the smarter MAS policies,” said Jim Schultz, director of the Democracy Center and a longtime Bolivia expert. But he added: “It’s hard to believe that [if Arce wins] you are not going to have Evo on the first flight back to Bolivia, messing around behind the scenes, or maybe in front of the scenes.”

“Comrade Evo . . . will need to defend himself first in all these court cases,” countered Mr Arce, who said his former boss would not take a government position. Mr Morales is under investigation for sedition, terrorism and genocide. The latest case against him is over allegations of rape. He denies all the charges.

It is yet another reminder that this is far from an ordinary election campaign — something Mr Arce said was clear from the start. “When I arrived in Bolivia from abroad for my candidacy, I was coming down the steps of the plane and there was already a police officer waiting for me with a summons from prosecutors,” he said. “Look at this political persecution.”